Playing the Reagan card on the debt ceiling is misleading 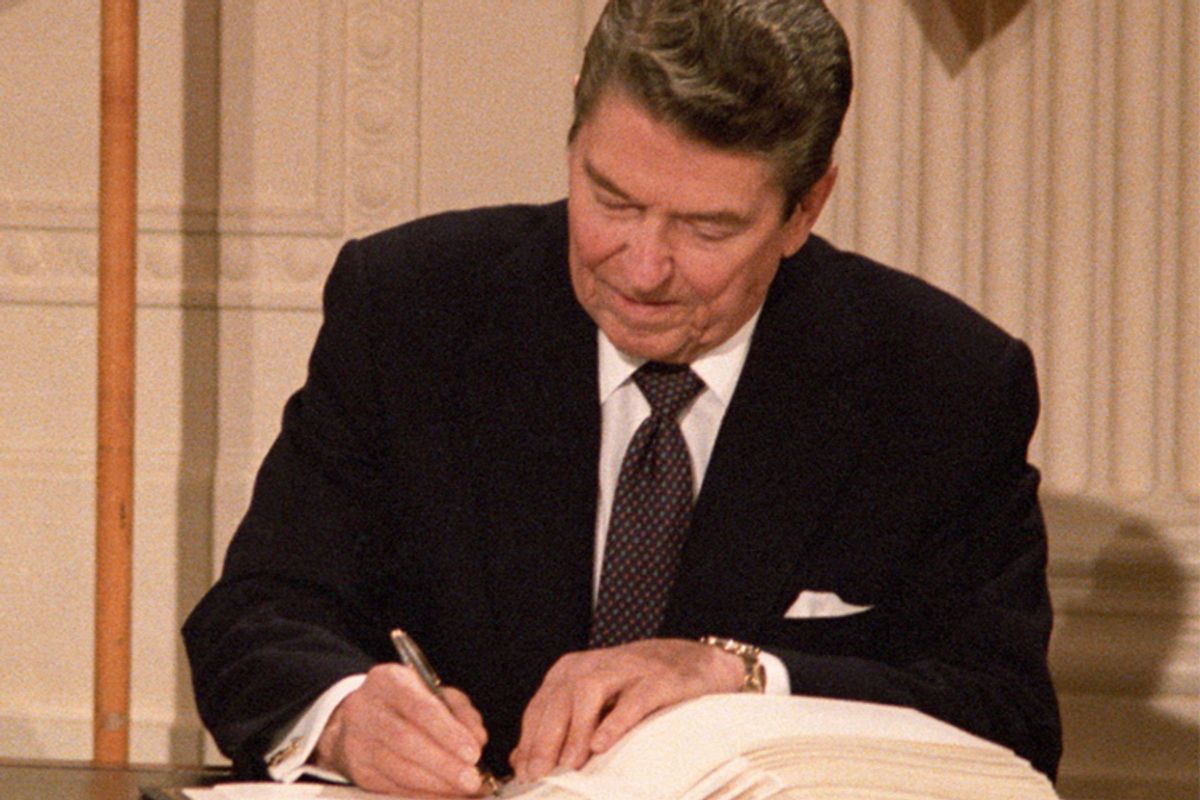 Democrats, you may have noticed, have spent the past few days shopping around decades-old clips of Ronald Reagan explaining the importance of raising the debt ceiling. The implication: Even the Gipper would be on our side in our showdown with the GOP of today!

It makes for a nice talking point: Congressional Republicans are flirting with forcing a debt default if their sweeping demands for spending cuts aren't met, but here's some video of the right's preeminent icon chastising Congress for "bringing the country to the edge of default before facing its responsibility." But removed from their context, Reagan's words don't really tell us much about what he'd be saying or doing if he were around today.

The particular Reagan quote comes from September 1987, when he agreed to extend the debt ceiling from $2.1 trillion to $2.8 trillion. A few days ago, Democrats dusted it off, calling it "an adult moment."

"Ronald Reagan raised the debt ceiling and without the taking of any hostages," John Larson, the fourth-ranking House Democrat declared. "Yes, there were political disagreements as there always are, but at the end of the day the country voted bipartisanly to make sure you didn't put people on the brink."

Actually, though, there was hostage-taking back in '87, except it was on a bipartisan basis.

On Reagan's watch, deficits had exploded, thanks mainly to his 1981 tax cuts (which slashed the top marginal rate for 70 to 28 percent) and to a massive increase increase in defense spending. From George Washington through Jimmy Carter, the country's debt had never grown past $1 trillion, but in just Reagan's first six years in office, it soared past $2 trillion, with no slowdown in sight. The deficit for fiscal year 1986 reached $220 billion.

It was against this backdrop that Congress decided to confront Reagan in 1987. The Supreme Court had just struck down a key enforcement provision of the 1985 Gramm-Rudman deficit reduction law (which mandated annual cuts), so Congress came up with a new plan: They'd attach a provision to the next debt ceiling increase requiring that the deficit be reduced by a fixed amount over the next five years until it was zeroed out. First up would be a $23 billion cut from the deficit, to go into effect with the fiscal year that would start that fall. Under Congress' plan, automatic budget cuts would be immediately triggered (half of them defense-related) if Reagan and Congress couldn't agree on a plan of their own by November 20.

The important thing to remember here is that neither congressional party was nearly as ideologically cohesive in 1987 as it is today. The Democratic ranks were still littered with conservatives from the South and moderate (and even liberal) Republicans were not uncommon. The GOP's Capitol Hill leaders -- Bob Michel in the House and Bob Dole in the Senate -- were both pragmatic, deficit-wary conservatives. That is, they were as alarmed by Reagan's deficits as many Democrats were, and they weren't averse to cutting a deal to address them, even if it meant raising taxes.

The Reagan White House reacted angrily, convinced that Congress was using the dual threat of a debt default (if Reagan vetoed the plan) and deep defense cuts (if Reagan signed the plan but then failed to reach an agreement with Congress on how to cut $23 billion from the deficit) to force the president into a tax hike -- something he opposed with the adamance of today's Republicans. Several of his aides urged him to veto it, and for several days he considered doing just that, until he finally relented and signed it. That is the backdrop for the video Democrats are now circulating.

But the story got even more interesting, because there was still the matter of the $23 billion in immediate deficit reduction mandated by the plan. Democrats, who controlled majorities in both chambers, demanded that new revenue account for at least half of any deal. Reagan refused to even consider this, talks collapsed, and the November 20 deadline -- at which point the automatic cuts to defense spending would go into effect -- neared. Hardline conservatives in Congress, who were just as loud then as they are now but far less numerous, backed him up. A staring contest ensued, until ...the stock market crashed.

On October 19, 1987 -- "Black Monday" -- the Dow Jones average plummeted by 508 points, to 1,738.74. This came after a two-month period in which the Dow had already lost 500 points. The crash set off immediate fears of an economic collapse, and while its precise causes are still a matter of some debate, a popular explanation quickly emerged: The country's runaway deficits had unnerved traders. Whether this was valid or not, the political world reacted as if it was, and so did the Reagan White House. After refusing to even meet with congressional negotiators until taxes were off the table, Reagan abruptly reversed course within 48 hours of the crash and scheduled a White House summit -- with tax hikes on the agenda. Ultimately, a $30 billion package -- $9 billion from taxes, $5 billion from defense and the rest from assorted domestic programs and the sale of assets -- was approved.

What does any of this tell us about today's debt ceiling fight?

Well, it's certainly notable that Reagan, a supply-side true believer, was spooked into a tax hike by the market crash. It suggests that the hardline conservatives who now dominate the GOP's congressional ranks (particularly on the House side) might be similarly moved if the markets begin showing serious signs of panic as the August 2 deadline approaches. Of course, it's also notable that many conservatives in Congress didn't react the way Reagan did to the crash. Jack Kemp, the preeminent supply-sider on Capitol Hill, branded the '87 deal "a breach of faith with the American people" and opposed it. Or maybe Kemp was playing for the cameras? He was, at the time, running for the 1988 GOP presidential nod and seeking to establish himself as the pure conservative alternative to Vice President George H.W. Bush (and Dole, who was also running).

And it's probably too easy to say that because Reagan warned about the consequences of default in September '87, he would be opposed to what congressional Republicans are now doing. For one thing, a showdown like the current one would be unimaginable if Reagan were now in the White House, since the GOP's debt crusade is a product of the Obama presidency. Somehow, skyrocketing deficits under George W. Bush never seemed to animate the GOP base like this. If President Reagan were presiding over massive deficits, rest assured hardline conservatives wouldn't be threatening to force a default.

But let's say Reagan weren't in the White House, and he was simply a private citizen today, watching this whole spectacle like the rest of us. Can we really say on the basis of his statement in 1987 (and similar statements from other moments in the 1980s) that he'd be appalled at what the congressional GOP is doing? Of course not -- or haven't you noticed that the deeply held principles of political leaders tend to evolve as the political climate changes? It's just as easy to imagine that Reagan, feeling the tug of loyalty to congressional Republicans who worship him, would be siding with them and finding some way to rationalize away his past statements. Sure, I said that then, but the debt crisis is much, much worse now -- these are not ordinary times!

Democrats are fond of pointing out the many ways in which Reagan's 1980s policies are at odds with the rhetoric that the GOP now favors -- tax hikes, amnesty for illegal immigrants, preserving Social Security and Medicare, and so on. This can be a useful exercise, as it illustrates how inflexibly conservative the Republican Party has become since he left office. But the idea that he'd be a man without a party today is probably nonsense. The key is that none of the positions Reagan took in the 1980s risked seriously alienating him from his political base. There was plenty of grumbling from conservative leaders at various points of his presidency, yes, but there was no widespread intraparty revolt. In other words, he managed his colaition fairly well and made do with the realities of the time. If Reagan were in office today, the same would probably be true -- even if it meant saying and doing things he never would have said and done in the '80s.