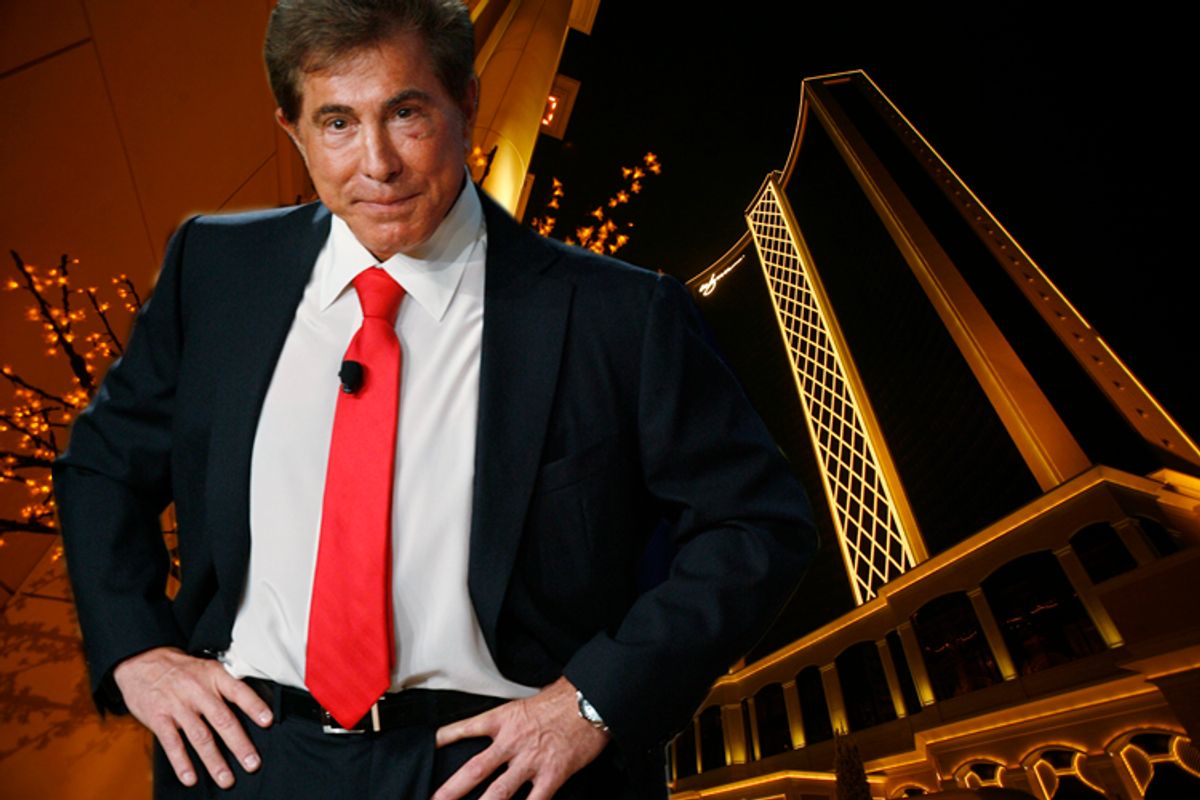 The newly opened Wynn Encore casino and hotel is lit up in Macau April 22, 2010. U.S. gambling tycoon Steve Wynn said he may move his company's headquarters to Macau as it embarks on a major expansion there, in a nod to the rise of the former Portuguese enclave as the world's new gambling capital. REUTERS/Bobby Yip (CHINA - Tags: CITYSCAPE BUSINESS) (Â© Bobby Yip / Reuters)
--

On Monday, in the middle of an otherwise routine conference call discussing the second quarter earnings of casino operator Wynn Resorts, CEO Steve Wynn launched into an impassioned diatribe against Barack Obama. Wynn, who more than any other man is responsible for the modern transformation of Las Vegas into the glitz-and-glam capital of the global gambling-entertainment industry, was responding to a question about whether he was considering new developments in Nevada.

I believe in Las Vegas. I think its best days are ahead of it. But I'm afraid to do anything in the current political environment in the United States. You watch television and see what's going on, on this debt ceiling issue. And what I consider to be a total lack of leadership from the President and nothing's going to get fixed until the President himself steps up and wrangles both parties in Congress....

...And I'm saying it bluntly, that this administration is the greatest wet blanket to business, and progress and job creation in my lifetime. And I can prove it and I could spend the next 3 hours giving you examples of all of us in this market place that are frightened to death about all the new regulations, our healthcare costs escalate, regulations coming from left and right. A President that seems -- that keeps using that word redistribution. Well, my customers and the companies that provide the vitality for the hospitality and restaurant industry, in the United States of America, they are frightened of this administration. And it makes you slow down and not invest your money. Everybody complains about how much money is on the side in America. You bet. And until we change the tempo and the conversation from Washington, it's not going to change. And those of us who have business opportunities and the capital to do it are going to sit in fear of the President.

And a lot of people don't want to say that. They'll say, "Oh God, don't be attacking Obama." Well, this is Obama's deal, and it's Obama that's responsible for this fear in America. The guy keeps making speeches about redistribution, and maybe we ought to do something to businesses that don't invest or holding too much money. We haven't heard that kind of talk except from pure socialists. Everybody's afraid of the government, and there's no need to soft peddling it, it's the truth. It is the truth. And that's true of Democratic businessman and Republican businessman, and I am a Democratic businessman and I support Harry Reid. I support Democrats and Republicans. And I'm telling you that the business community in this company is frightened to death of the weird political philosophy of the President of the United States. And until he's gone, everybody's going to be sitting on their thumbs.

Redistribution? What Obama has proposed is a return to Clinton-era levels of taxation on the wealthiest Americans. That would presumably cost Wynn some money -- according to Forbes.com, Wynn is the 512th richest American, with a net worth of $2.3 billion. If we want to talk redistribution, what we've seen over the last three decades has been a remarkable redistribution of wealth from the lower and middle class to people like Wynn. With federal taxes, measured as a percentage of GDP, at 60-year lows, is it really all that "socialist" to recommend a return to the tax rates of the go-go '90s? A period, incidentally, in which Wynn made an awful lot of money.

As for the debt ceiling -- if Wynn has any suggestions for how Obama might be able to "wrangle" House Republicans, I'm sure he'd be all ears. But since it's pretty clear that House Republican leaders can't even control their own caucus, it is rather difficult to see how Obama can bend them to his will.

It must be frustrating to be a casino and resort operator in Nevada. The state has suffered terribly from the double whammy of the housing meltdown and the collapse in leisure spending that accompanied the worst recession in 70 years. When you've lost your house and your job, a weekend of gambling and high living in Las Vegas isn't quite as attractive anymore. My guess is that Wynn's unwillingness to plow cash into new resort developments has much more to do with a lack of consumer demand than with ObamaCare or Dodd-Frank, or anything else that the president has even tangentially been involved with.

Luckily for Wynn, he doesn't have to depend on Nevada to make a buck. Wynn Resorts is a major player in Macau, where profits are generated by sucking in cash from Chinese gamblers. And just listen to what Wynn has to say about China!

September will be our fifth anniversary in the People's Republic of China in Macau, and we love it there. We are so grateful to be part of that market and to be allowed to participate in that community. We find the political environment, the regulatory environment, the human resource environment that we're in to be absolutely delicious. Life is quite straightforward in China. The government is predictable. Our employees are eminently trainable. They're anxious to please. They have a fabulous attitude, whether they're local Macau people, mainland Chinese people, folks from the Philippines, they're just wonderful and all of that's come together to help us deliver the kind of product that we've always been delivering.

Anxious-to-please workers! Is there a little resentment to be sensed here at the power of unions in Nevada -- one of the few remaining regions in the United States where organized labor still has some clout? And how about that "absolutely delicious" political environment! I wonder how many of the right-wing blogs that are passing around Wynn's "epic Obama rant" would even be allowed to operate in China? It's just so easy, after all, to be straightforward when you have totalitarian political control -- no annoying independent unions or opposition parties that need to be "wrangled." The Chinese Communist Party would know exactly what to do with the Tea Party.

Steve, chill out. Remember what you told Charlie Rose when you acknowledged that you had a problem with your "explosive temper"?

He got to this state of self awareness with the help of a friend, the Dalai Lama. "He says to me, 'I'll do an imitation, When you get angry, when you lose your temper, when you think that you shout and react in a poor way to other people, it is a result of a false sense of yourself, an inflated sense of yourself that is worthless,'" Wynn said.