29 public companies have more cash on hand each than the U.S. Treasury -- but they won't spend it to create jobs 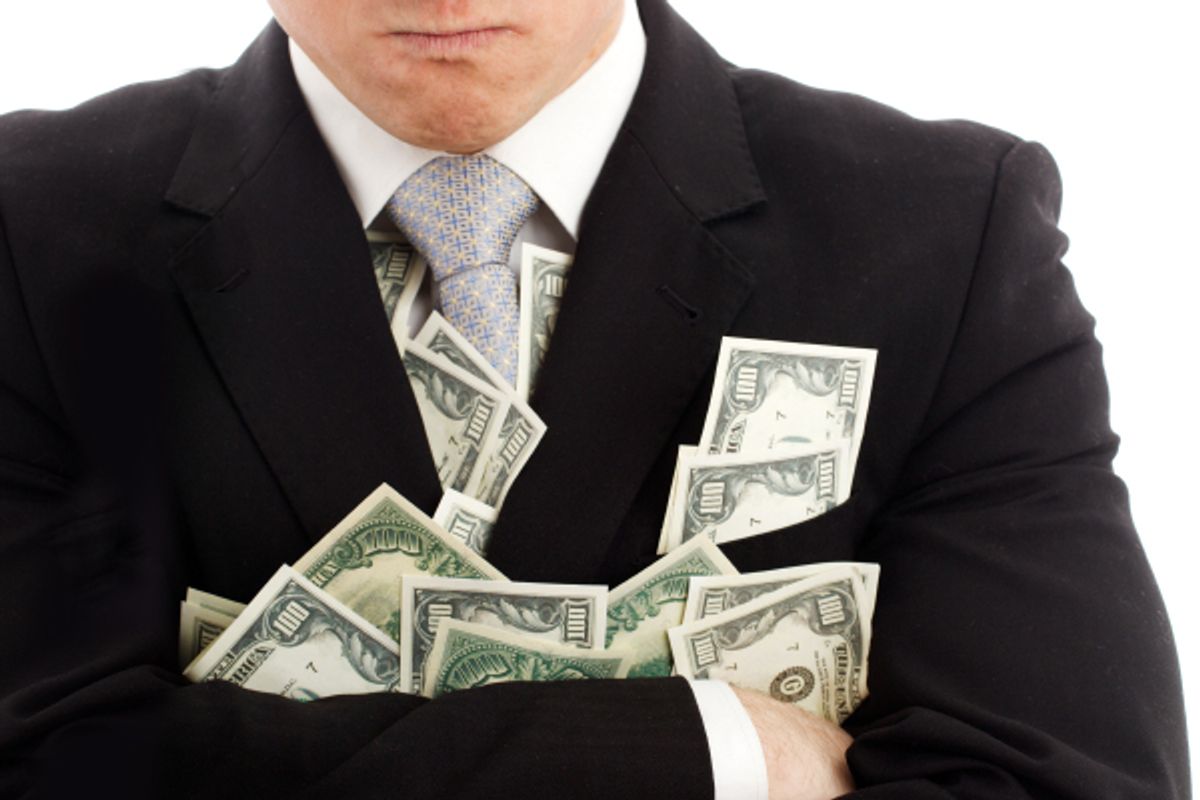 We went to Mount Vernon in Virginia a few weeks ago. It was the first time I'd been to George Washington's family estate since a whirlwind day tour of Washington, D.C., when I was a high school freshman. Our guide then was a fast-talking cabdriver who interlaced his rapid-fire wisecracks with an impressive command of facts and figures, many of which may even have been correct.

Today, the Washington plantation, once in sorry shape, has been beautifully restored, from mansion to slave quarters. At two state-of-the-art visitor and education centers sightseers can learn all about the great man's life and times, including a sound and light presentation on battles of the American Revolution that features howling wind and falling "snowflakes" -- tiny bits of soap suds pumped into the theater -- when Washington crosses the Delaware.

The whole thing isn't run by the National Park Service, as you might have expected, but by a private, nonprofit organization, the genteelly named Mount Vernon Ladies' Association, which raises money from ticket sales, food, souvenirs and money from individuals, foundations and corporations.

A lot of money. According to the MVLA's most recent annual report, "In 2010, 47,242 individuals, corporations, and foundations contributed more than $17 million to the Mount Vernon cause." With George Washington a favored Founding Father of the American right, no small amount of those funds have come from such conservative contributors as the Heritage Foundation, the F.M. Kirby Foundation, the Richard and Helen DeVos Foundation, the Mars family of candy bar fame, and newspaper publisher Richard Mellon Scaife.

Conservative screenwriter Lionel Chetwynd scripted the introductory film at the site's orientation center. And during her recent bus tour, Sarah Palin had paid a visit just a couple of weeks before our arrival, writing on her website that daughter Piper mentioned to her how hard Washington must have worked "to keep that farm going." Stephen Colbert responded, "It's true. I cannot imagine how hard he worked, with no help other than his African volunteers."

A quick perusal of Mount Vernon's annual report reveals that its many corporate funders include the Ford Motor Co., Toyota, the Distilled Spirits Council of the United States, Altria (formerly Philip Morris), Coca Cola, the American Gas Association, PricewaterhouseCoopers, M&T Bank, Stanley Black & Decker and BAE Systems -- the massive, British-based defense contractor that last year pleaded guilty to criminal charges related to bribery allegations and paid almost $450 million in penalties to the United States and Great Britain. (Wonder what the George Washington of slaughtered cherry tree and "I cannot tell a lie" fame would make of that?)

In fairness, they all have helped preserve a beautiful historic landmark, but as I looked at their names, I couldn't help thinking that they and their big business colleagues could perform an even greater patriotic service to America by working to create more jobs.

Naive? Not really. After all, as of last week, as per the website Zero Hedge and data analysts Capital IQ, 29 public companies -- including Bank of America, JP Morgan Stanley, Goldman Sachs, GE and Warren Buffett's Berkshire Hathaway -- each have more cash on hand than the U.S. Treasury. And as Citigroup's Peter Orszag, former director of Obama's Office of Management and Budget, wrote on July 13, we need to be "as bold as we can." Says he, "The right policy response is a combination of more aggressive attention to bolster the job market now and much more deficit reduction enacted now to take effect in a few years."

So why not make a sacrifice bigger than a nice hefty grant to Mount Vernon or the historic location of your choice and commit instead to finding employment for at least some of the 14.1 million out of work? After all, the Republicans keep telling us these corporations and their rich executives and stockholders need every last one of their outlandish tax breaks -- because they're job creators!

Yeah, right. In May, when Fortune magazine released this year's list of America's top 500 companies, its editors wrote, "The Fortune 500 generated nearly $10.8 trillion in total revenues last year, up 10.5 percent. Total profits soared 81 percent. But guess who didn't benefit much from this giant wave of cash? Millions of U.S. workers stuck mired in a stagnant job market ... we've rarely seen such a stark gulf between the fortunes of the 500 and those of ordinary Americans."

In June, a report from Northeastern University's Center for Labor Market Studies found that since the economic recovery began two years ago, "corporate profits captured 88 percent of the growth in real national income while aggregate wages and salaries accounted for only slightly more than one percent." It goes on to declare, "The absence of any positive share of national income growth due to wages and salaries received by American workers during the current economic recovery is historically unprecedented. The lack of any net job growth in the current recovery combined with stagnant real hourly and weekly wages is responsible for this unique, devastating outcome."

The report concludes that in this jobless, wageless recovery, "The only major beneficiaries of the recovery have been corporate profits and the stock market and its shareholders."

A new study conducted for the New York Times by the executive compensation data firm Equilar found that the median pay for top executives at "200 big companies" last year was $10.8 million: "That works out to a 23 percent gain from 2009." The richest 1 percent makes almost 25 percent of the nation's income. The Center on Budget and Policy Priorities notes that the United States has the worst income inequality of the 24 industrialized nations that belong to the Organization for Economic Cooperation and Development -- more horrendous, in fact, than Pakistan and Ethiopia.

And yet a recent headline on CNBC's website reads, "Firms Have Record $800 Billion of Cash But Still Won't Hire." Maybe they've never heard the Bible's exhortation that to whom much is given, much is expected, a sentiment well understood by George Washington, who gave up the life of a gentleman farmer -- twice -- to come to the aid of his fledgling nation.

Just a couple of days before Washington crossed the Delaware during that bleak Christmas of 1776, with real ice, wind and snow -- no soap suds -- Thomas Paine famously predicted that "The summer soldier and the sunshine patriot will, in this crisis, shrink from the service of their country." Today's corporate giants, blinded by greed, oblivious to the despair around them, are doing much the same. That can't last.

By the way, all those complaints about corporate tax rates and hanging on to their precious loopholes, subsidies and Bush tax cuts? The Center for Tax Justice, a nonprofit research and advocacy group, finds "the U.S. is already one of the least taxed countries for corporations in the developed world" -- as a percentage of GDP second only to, wait for it, Iceland. Up the revolution.