The straight-to-DVD "Courage, New Hampshire" is a tale of justice, godliness and wildly varying accents 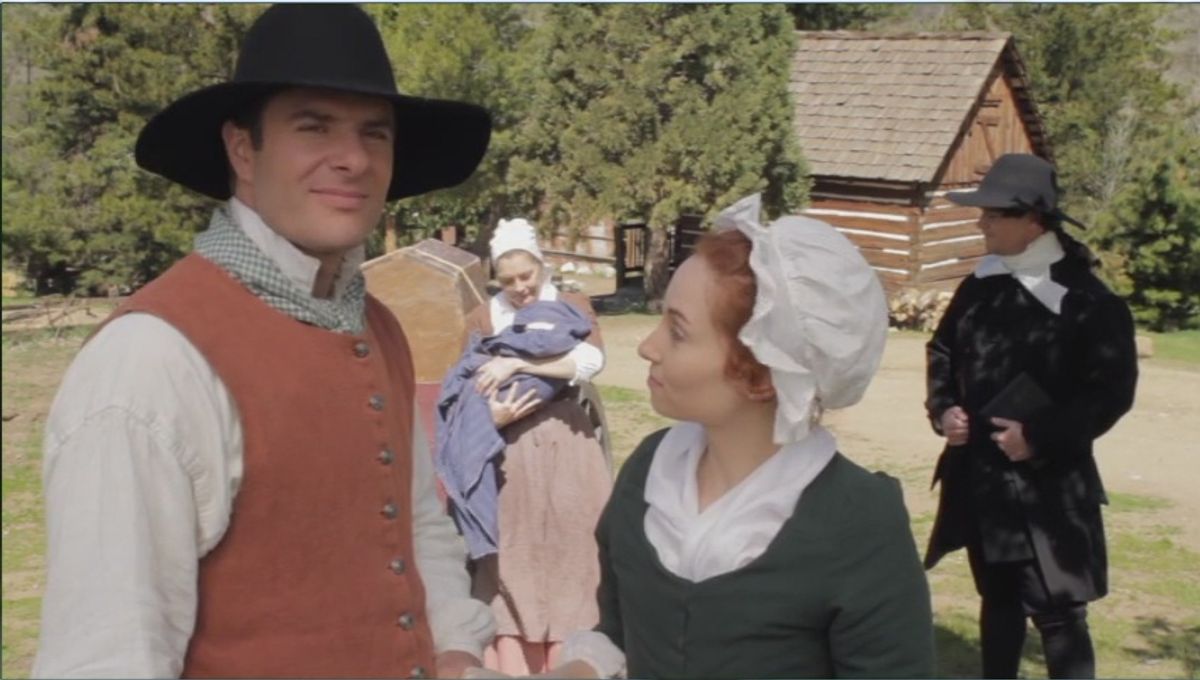 Despite the heavenly perfection of the free market, Hollywood, mysteriously, refuses to provide family-friendly entertainment that is, shall we say, correct, politically. While it may seem like the entertainment industry is devoted to profit above all else, and is therefore engaged in giving the people what they want, the truth is those show business freaks are shoving their liberal values down America's throat, as evidenced by "Glee" and Lady Gaga's appearance on "American Idol."

Thankfully the Tea Party has decided to produce its own entertainment, just like it produced its own history. If the grand liberal conspiracy theory of Hollywood is correct, underserved Real Americans will flock to Tea Party entertainment options in droves, forcing every film and television studio to produce appropriately conservative fare or go out of business entirely.

The first big offering from "Colony Bay Productions," the Tea Party-affiliated studio, is a TV show called "Courage, New Hampshire." It has not yet been picked up by any network, so the studio just released it on DVD and is selling it on its website.

"Courage, New Hampshire," disappointingly, is not the story of a grizzled Manchester homicide detective named "Danny Courage." It is, instead, a soapy period costume drama about the fictional town of Courage in the days before the American Revolution. The first episode, "The Travail of Sarah Pine," is the story of a colonial "grizzly momma" named Sarah Pine. Pine is a slow-witted, slightly deranged young woman who is convinced that a caddish British soldier who knocked her up a year ago will return to marry her. When the soldier, Sgt. Bob Weedle, returns to Courage for some other reason, a year later, he is arrested by the town's principled, honorable justice of the peace, Silas Rhodes, played by some guy. (Not sure why they couldn't get Jon Voight -- he would've been perfect.) (Oh, wait, this guy is the co-founder of Colony Bay Productions.)

As proof of the producers' commitment to historical accuracy, the British are all evil and speak with British accents, while the colonists are mostly good and speak with (wildly varying) American accents. (Well, one of them sort of has an Irish accent.)

So, Weedle is apparently under arrest for "fornication," though, oddly for colonial days, no one seems to have punished Pine for bearing a bastard child.

Then there is a great scene where Weedle chops the same piece of wood over and over again, seemingly without successfully splitting it, while having an odd conversation with Sarah Pine.

Pine: "You know what the Word says about men in your station."
Weedle: "I confess, I do not know."
Pine: "Protectors of the innocent, bearing the sword against evil. Rewarding those who do good, who love God."
Pine: "I'm a KINGSMAN, Sarah! I eat the king's bread, I do the king's bidding. I always have, and I always will!"
Pine, to her baby: "That's why God made your poppa so strong, little lamb. To put his arms around us."

So, she's not all there, as you can see.

Someone named "Simian Trout" (I think?) shows up to act as Weedle's lawyer, and he is great. Trout is played by longtime minor character actor Basil Hoffman, who is acting all over this show. Trout was sent by the governor, who does not want to upset the king, on account of how many soldiers there are in Boston, but Rhodes insists on trying Weedle, because of justice. ("One law for England, and another for us? Is that what it is, Simian? Not while I'm justice!")

Most of the rest of the episode is a gripping courtroom drama.

Once the defense attorney begins cross-examining Pine, there is a montage implying a lengthy, exhausting questioning. But then the montage ends and Rhodes says: "Mr. Trout, for the last time, you will ask a question of the witness or not, but you have tried this court's patience long enough."

Then he cruelly cross-examines her by accusing her of lying to her aunt and fornicating with a guy, and everyone gets so mad, even though this is basically the exact tale she told before, when the prosecutor questioned her. (As you can see in the clip above, Rhodes is not happy with this line of questioning.)

Trout calls some drunk person, for comic relief. Is he the best part of the movie? You be the judge!

But Pine's attorney has a surprise witness! Some redcoat from Weedle's regiment! The redcoat confirms that Weedle not only impregnated Pine, but he also -- unlikely as it may seem -- said he totally loved her and wanted to marry her.

Why did he decide to give this testimony? "Because I know what it is ... to be called a bastard." Shocking twist!

(Also I thought his regiment was days away in Boston or something, because Weedle kept claiming that they would show up and burn the whole town down and shoot everyone if the didn't let him go? Unfortunately, this never happened. No one fires a single musket.)

But then they declare Weedle innocent, because there was no such thing as DNA testing back then. But Weedle shocks everyone by abandoning the king's army and deciding to raise his child with Sarah Pine. He moves out west, to steal land from the Indians.

Then the Boston Massacre happens (off-screen, in Boston). And Rhodes and his redcoat friend decide not to send the militia after Weedle and his wife until after breakfast. The end. A tour de force! All I could think at the end was, that was amazing, but why was none of it about taxes?

"If you thought the portrayal of John Adams as a chubby, bald, Italian indie actor was proof that the liberals who run Hollywood hate our Founders, you'll love the guy who wrote and stars in 'Courage, New Hampshire.'" -- Me.