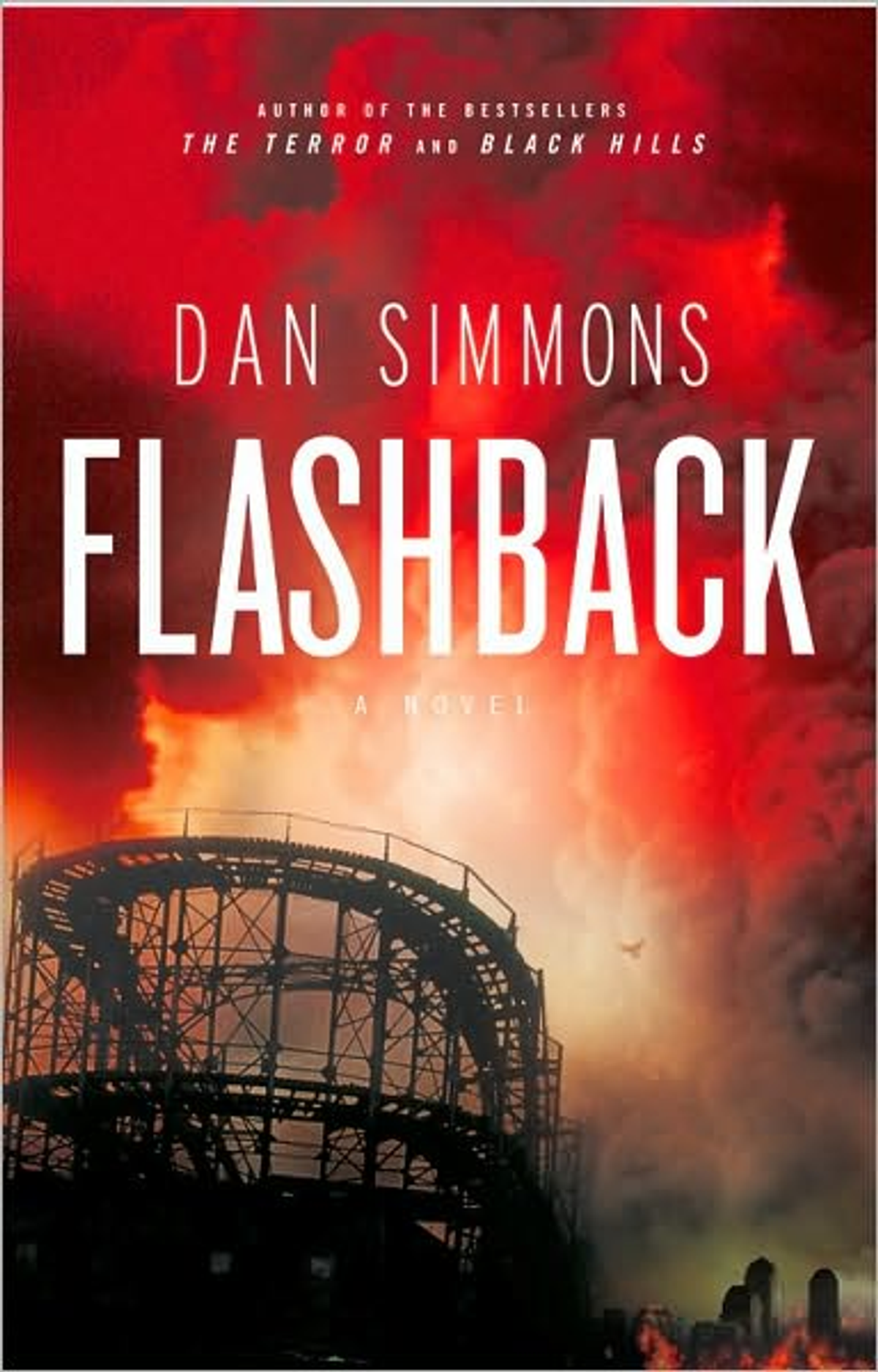 Dan Simmons, for years familiar to fans of science fiction, fantasy, and horror, made his way to the general reader with two historical/horror hybrids. "The Terror," published in 2007, was an enthralling and fantastical conjuring up of Sir John Franklin's doomed voyage in search of a Northwest Passage. "Drood," appearing two years later, was a creepily ingenious extrapolation of Charles Dickens' unfinished last novel and his vexed friendship with Wilkie Collins. Then came last year's "Black Hills," a less satisfying story that posited an American Indian's mystical union with the soul of General George Custer.

So much for history. With "Flashback," Simmons has, for the moment at least, put the past behind him and turned a righteous pen to a dystopian future. It is circa 2032, or more precisely, the 23rd year of Jobless Recovery. The U.S. is tottering, weighing in at only 44 ½ states, its mass eaten away by Mexico, its interior rotted out by floods of immigrants, by loss of faith in a free-market economy, by national healthcare and a myriad of other entitlement programs, by the global-warming hoax and green-energy boondoggles, and by drugs, the most pervasive being "flashback," which allows its users to visit their pasts in a dream state. It's a bad, bad time, and its fatal origins lie, we are instructed, with the Obama presidency, its spendthrift domestic programs and pusillanimous foreign policy.

Highways are disintegrating, people live in former malls cut into cubicles, and, adding insult to injury, right-wing talk radio has been banned. Japanese overlords have set up "green zones" across the land and America's once proud and powerful military is now hired out as mercenaries to fight for Japan and India. At the same time, a New Global Caliphate flourishes and Islam spreads. An immense and towering mosque sits at ground zero and annual celebrations commemorate the attacks of Sept. 11, 2001. In Los Angeles, where much of the story takes place, the bells of Christian churches add their peels to "the cries of the muezzin ... to show their solidarity, understanding, and forgiveness." The Caliphate has obliterated Israel with 11 exceedingly dirty nuclear bombs, killing 6 million Jews. The survivors of this "Second Holocaust" are now sequestered in a former Six Flags amusement park in Denver by a U.S. government "terrified of angering the Global Caliphate" that is waiting to exterminate them.

With all this going on (and on), there hardly seems room for a plot, and yet there is one, balky and encumbered by jeremiads though it may be. Nick Bottom, Denver resident, ex-policemen, and sometime private detective, has been addicted to flashback ever since his wife was killed in a car crash five years ago. The drug lets him relive their happy times, but it has ruined his actual life and alienated his son. This is Val, who has gone to live in Los Angeles with his maternal grandfather. But the boy, tumid with anger and angst, is going to the bad, having joined one of the many "flash gangs" that roam the disintegrating city, committing violent and unspeakable acts in order to revisit the thrill through flashback. Val's gang has something big planned, but he himself just wants to get back to Denver to kill his dad for not phoning him on his birthday. Plus, L.A. is erupting into full-blown war; so Val and the old man join a convoy of big rigs traveling west over lurid and lawless highways and meet people with strong views, all thoroughly aired.

Meanwhile, Nick has been hired by a Catholic, multibillionaire Japanese overlord to solve the six-year-old murder of his son, a case Nick had failed to crack when he was on the police force. Why call on him again? It's a mystery and a growing source of great fishiness. Getting to the bottom of it involves quantities of flashback, some high-tech virtual-reality spectacles, an enormous, impassive Japanese warrior dude, a few ninjas, two futuristic armored personnel carriers, and one 2015 Chevy Camaro with gun slits for windows and a "raging 6.2-liter l99 V-8 engine" (delivering "603 horsepower and 518-pound-feet of torque"). If anything can plow through polemics, this baby can, and indeed, the battles and chases that interrupt their didactic flow provide the book's only entertainment. In the end, the novel's real mystery remains: How could the witty and potent imagination that produced "The Terror" and "Drood" wither to such smug and censorious dullness?