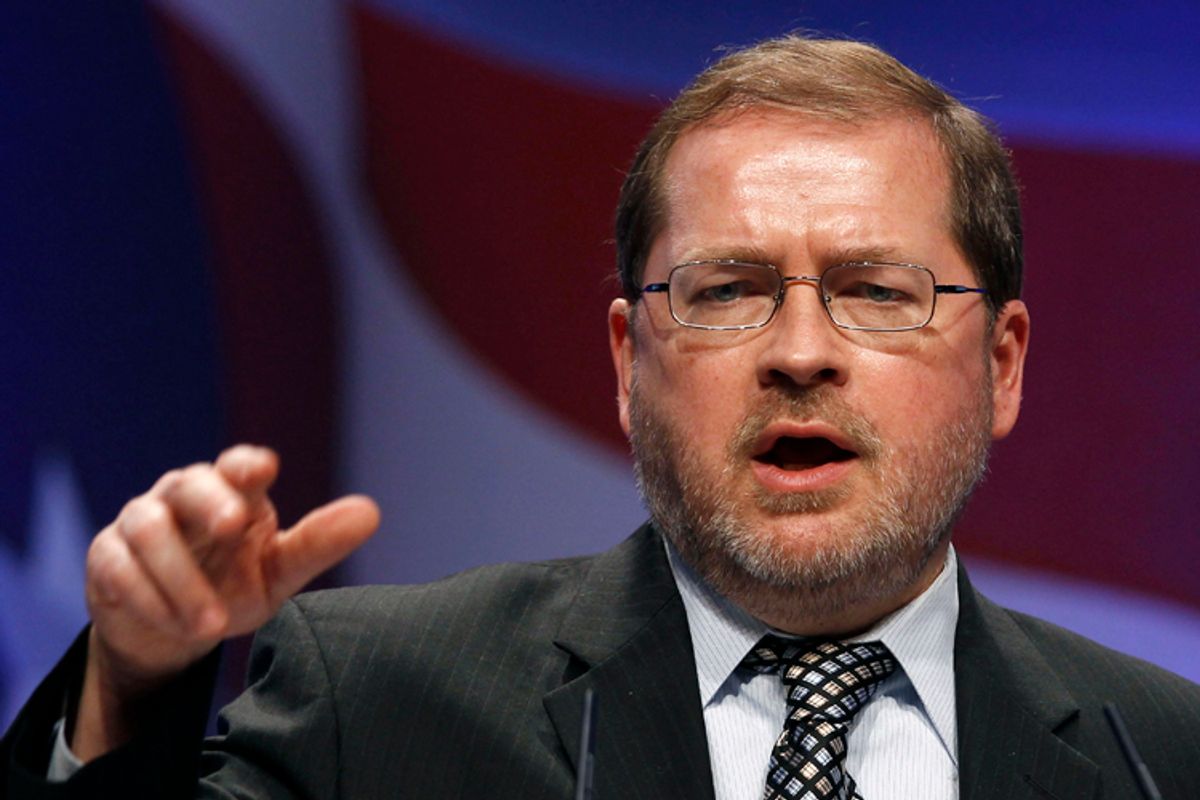 The Washington Post published a blockbuster scoop today that makes absolutely no sense:

With a handful of exceptions, every Republican member of Congress has signed a pledge against increasing taxes. Would allowing the Bush tax cuts to expire as scheduled in 2012 violate this vow? We posed this question to Grover Norquist, its author and enforcer, and his answer was both surprising and encouraging: No.

In other words, according to Mr. Norquist's interpretation of the Americans for Tax Reform pledge, lawmakers have the technical leeway to bring in as much as $4 trillion in new tax revenue -- the cost of extending President George W. Bush's tax cuts for another decade -- without being accused of breaking their promise. "Not continuing a tax cut is not technically a tax increase," Mr. Norquist told us. So it doesn't violate the pledge? "We wouldn't hold it that way," he said.102

That's quite a different line than the one was Norquist was slinging a year ago at this time:

Allowing the Bush tax cuts to expire at the end of this year, as the Democrats plan, will in fact result in "about a trillion-dollar tax increase on the American people over the next decade," Norquist says.

"It would be the largest tax increase in American history, and it would take every marginal tax rate and increase it. The taxes on businesses, on capital gains, would be very high."

So... "the largest tax increase in American history" "is not technically a tax increase." Jon Chait is correct to call this news "pretty strange." One way to interpret it is that the pressure coming from the business community to cut a debt ceiling deal -- even if it includes allowing the Bush tax cuts on the wealthy to expire -- is now becoming so great that even Grover Norquist is feeling the heat.

But Norquist is the high priest of the starve-the-beast church, and the Bush tax cuts are a pillar of his theology. By giving Congressional Republicans tacit permission to opt out of his pledge and cut a deal, he has committed apostasy. Truly, these are the end times.

UPDATE: Americans for Tax Reform has released a strongly worded statement declaring, in no uncertain terms that "ATR opposes all tax increases on the American people."

It is a violation of the Taxpayer Protection Pledge to trade temporary tax reductions for permanent tax hikes.

If I understand that correctly, ATR is saying that while allowing a temporary tax cut to expire does not violate the pledge in and of itself, any net tax increase as a result of a debt ceiling deal would break the pledge.