Let's not kid ourselves: Muslim-baiting has worked for Cain

Herman Cain won't be the GOP candidate in 2012, but that doesn't mean his strategy has backfired 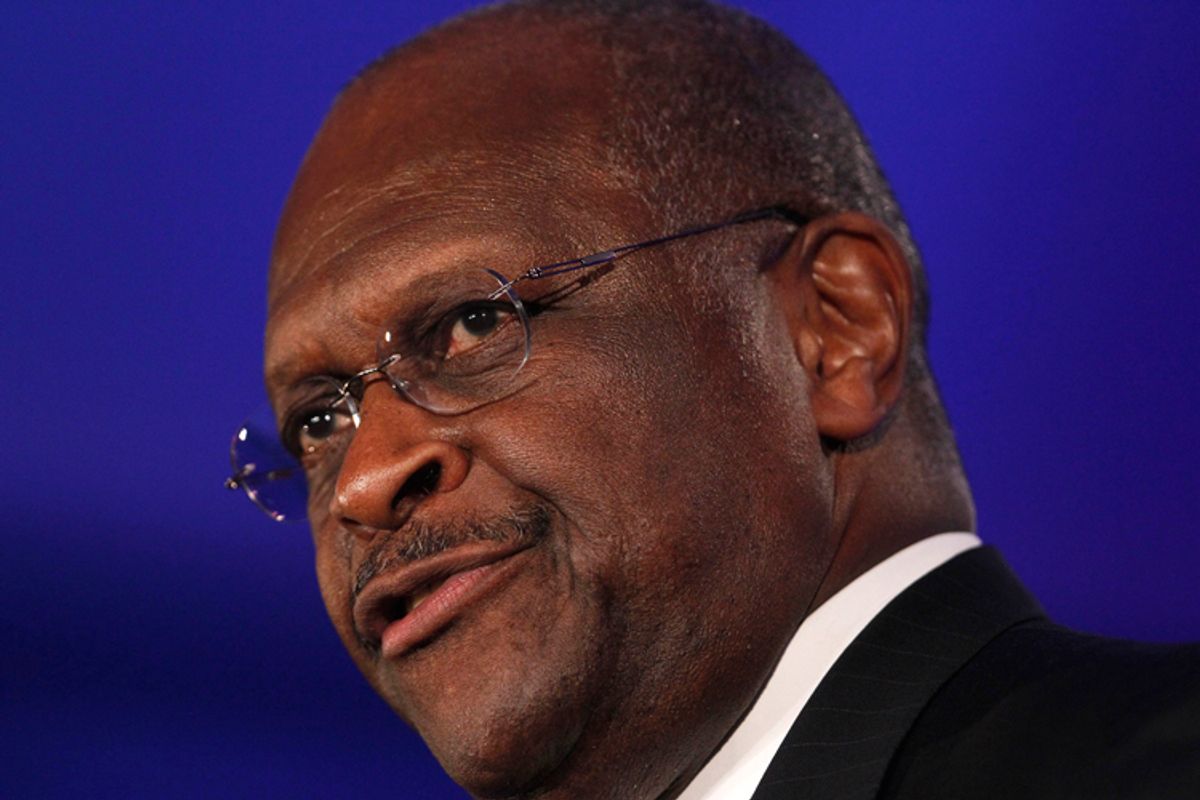 In the past few months, Herman Cain has said that he'd be uneasy appointing a Muslim to his Cabinet, endorsed the idea of loyalty tests for Muslims, and argued that any community in America should be free to ban mosques if that's what its citizens want. "Islam," the Republican presidential hopeful has claimed, "is both a religion and a set of laws -- Sharia laws. That's the difference between any one of our traditional religions where it's just about religious purposes."

More than any of his GOP rivals, Cain has made demonization of Muslims his calling card. We can call his pronouncements ugly and misinformed, and they certainly are. But let's not pretend that in the Republican political universe of 2011 they make for a bad political strategy.

That's what the Atlantic's Joshua Green claimed earlier this week, in a piece that argued Cain has badly miscalculated with his Muslim-baiting antics and that he would have been wiser to make a 17-year-old video clip in which he confronts then-President Bill Clinton over his healthcare reform plan the centerpiece of his pitch to GOP voters:

Instead, Cain hasn't laid a glove on the frontrunner, spends much of his time tilting at windmills like Sharia law, and remains stuck at around 10 percent in the polls. The vast majority of Republicans, in other words, don't want Cain to be their nominee. You'd think that a guy as sharp with numbers as the CEO in that clip would do the math and realize his error.

The problem with this interpretation is that Cain has actually fared much better as a presidential candidate than someone with his background should.

Before this campaign, his only previous foray into electoral politics came in 2004, when he finished a very distant third place (nearly 30 points behind the winner) in a Republican Senate primary in Georgia. And while he did spend 16 years as the CEO of a national restaurant chain, it's not like Cain used that role to establish himself as a leading corporate titan. As I noted before, the profile that he brings to the '12 race is most consistent with those of Alan Keyes and Morry Taylor, two hopeless longshots who struggled in vain for press attention and votes in the 1996 GOP contest.

Claiming that Cain is "stuck at around 10 percent in the polls" misses the point. To be at that level is actually quite an achievement for a failed former Senate candidate.

It would be too much to say that attacking Muslims is the reason Cain briefly pulled into second place in some polls this spring. By most measures, his surge began after the first GOP debate, which was televised by Fox News back in May. His competition was limited (Mitt Romney and Michele Bachmann weren't there) and Cain easily stole the show with confident, energetic recitation of Tea Party-friendly rhetoric. He became the flavor of the month among highly engaged Republican voters, although more recently his numbers have begun returning to earth -- a consequence of Bachmann's breakout performance at the second GOP debate.

But while he was hot, Muslim-baiting was very much a part of Cain's message -- and there was no sign that it was hurting him at all with GOP voters. Of course it didn't. Suspicion of Islam and distrust of American Muslims is increasingly common within the base of the Republican Party. For instance, a Public Religion Research Institute survey earlier this year found that 31 percent of Republicans believe that American Muslims want to establish Sharia law in this country, and that 34 percent of white evangelicals feel the same way. Republicans are also four times less likely than Democrats to believe Muslims have been unfairly targeted by law enforcement. And nearly 60 percent of Republicans don't believe Muslims have done enough to combat terrorism in their own communities.

The bottom line is that it's hard to say Cain's strategy has been anything but smart. His support is now returning to its natural level and his moment seems over. (But who knows? Maybe he'll have another one.) But this is not because of his loud Muslim-baiting. It's because there was never any realistic strategy that would have allowed someone with his credentials (and with, as Jonathan Chait aptly put it, the inability to "bluff his way through basic questions") to seriously compete for the nomination. The amazing thing is that he defied political gravity for as long as he did -- and he did that while attacking Muslims.