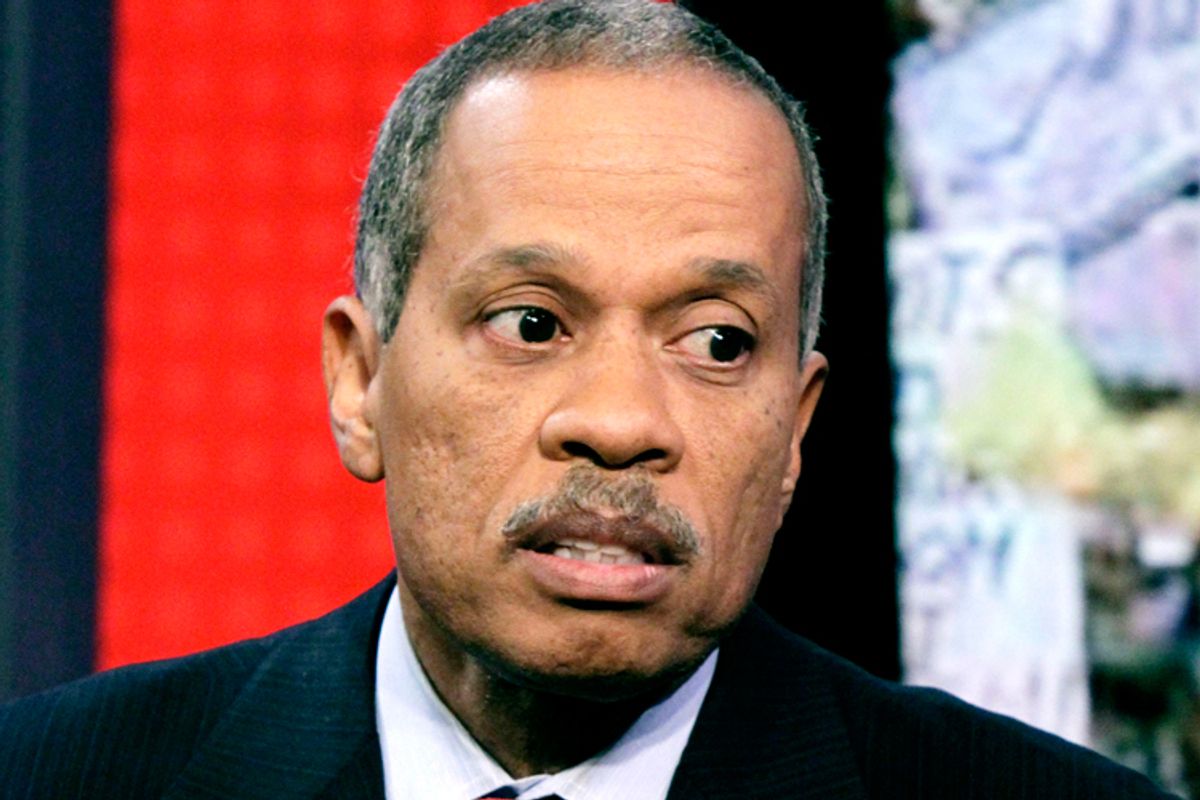 Boy, was getting fired from NPR the best thing that ever happened to mediocre commentator Juan Williams. The entire book he wrote on the subject of getting fired from NPR, "Milking It: The Juan Williams Story" (sorry, I meant "Muzzled: The Assault on Honest Debate") is out next week, and various anti-NPR excerpts are now up at Politico. Juan Williams, who now works for Fox, where he is a professional "victim of the liberal media," says NPR is a "very elitist" and "white institution."

Juan Williams, again, works for Fox News. The closest Fox News gets to a regular minority presence is brunettes. (And Geraldo, I guess.) It's the channel of aggrieved white people who think they don't count as "elites" because they don't ... listen to NPR.

"NPR editors and journalists found themselves caught in a game of trying to please a leadership team who did not want to hear stories on the air about conservatives, the poor, or anyone who didn’t’ fit their profitable design of NPR as the official voice of college-educated, white, liberal-leaning, upper-income America," he writes.

Yes, well, you are significantly more likely to hear stories about "the poor" on NPR than you are on Fox, unless Fox is reporting on how ACORN is stealing elections by registering poor people to vote.

Which is not to say that Juan Williams is totally wrong about NPR! It is, indeed, white and elite. Its target audience is largely white, and elite. But NPR is also a news-gathering organization with professional standards of objectivity and traditional journalistic ethics. Everything NPR produces is informed by its elite institutional bias, but it's not defined by a specifically partisan bias, like Fox. (And NPR is not owned by a multinational media organization currently under fire for a widespread culture of breathtaking corruption, but that mostly came out after the book went to press.)

Williams is still either purposefully or ignorantly confusing NPR getting embarrassed by the dumb things he constantly said with NPR "censoring" him due to "political correctness." It's not really worth trying to argue with Williams' claims, though, because everything he's done since making his idiotic anti-Muslim comments has proved that he is essentially a buffoon. And, if the eagerness with which he jumped into the role of professional victim is any indication, not even a self-respecting one.

But he is happy, I guess, with his million-dollar contract and his new best friends in the conservative movement, who actively and passionately work every day of their lives to destroy everything "liberal" Williams supposedly believes in.

According to Newsmax, even Williams' wife, Delise, is happier with Juan at Fox.

Williams' wife says everyone at NPR was mean to her all the time, and says her and her husband were the only black people at NPR parties. That's probably mostly true! But she goes on to say that Fox is a regular rainbow coalition.

“The Fox gatherings are much diverse,” she says. “They have both African-American and whites. It’s great because when I sometimes go down to Fox and wait for Juan in the green room, they all speak to me as if they know me and are very friendly. I feel very comfortable there. With the NPR people, I did not feel comfortable.”

Here is a brief description of Williams' Fox-hosted book party, by the way:

At Juan’s book party given by Fox News anchors Bret Baier and Shannon Bream and others, Fox News contributors Charles Krauthammer, Stephen Hayes, and Baier all expressed their esteem for Juan despite their often differing views.