My interview with LulzSec

In an exclusive conversation, a member of the group explains why Rupert Murdoch brought him out of retirement 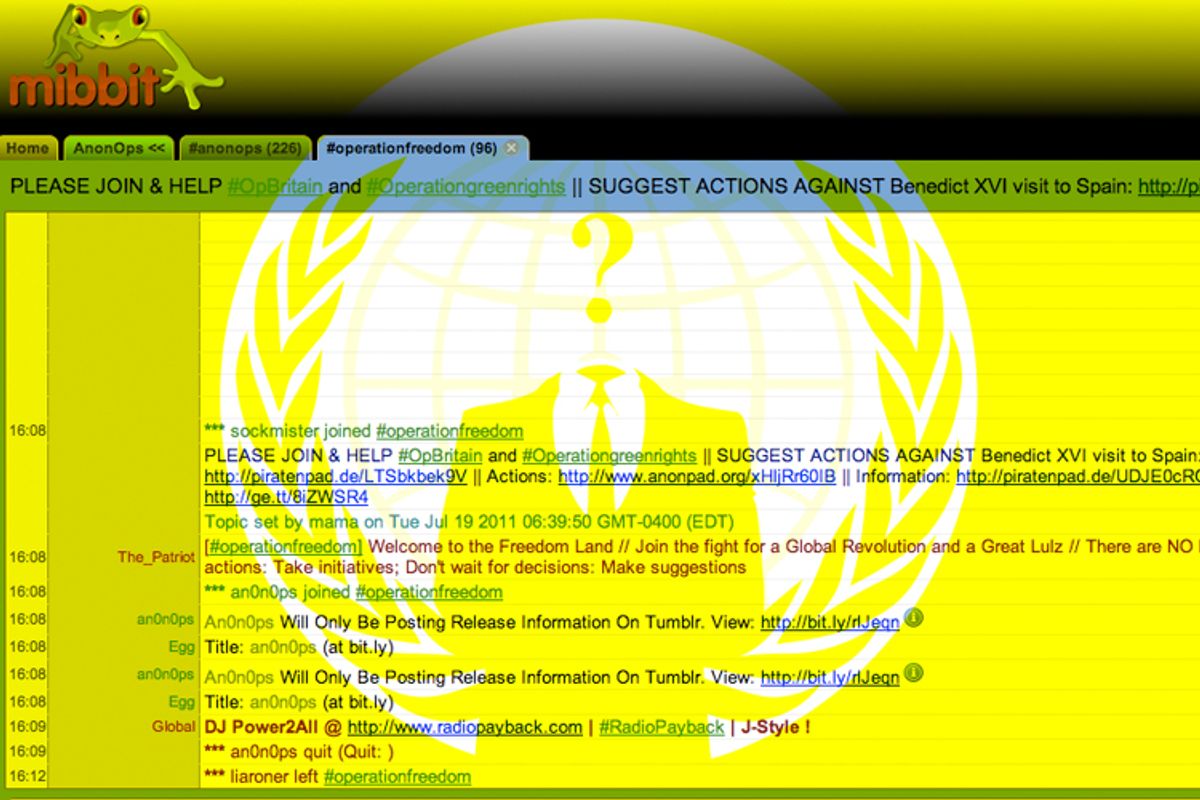 If you're looking to find one of the LulzSec hackers, look no further than the Anonymous chat network (shown above)
--

You probably wouldn't expect that you could unceremoniously waltz into an Internet chat room and engage some of the most controversial and successful hackers in the world -- from the groups Anonymous and LulzSec -- in one-on-one conversation. But that's exactly what I did on Wednesday.

The members of these groups take great pains to protect their identities, lest they find the long arm of the law knocking down their doors. That's what happens when you become, like Anonymous, an established presence in the world of cyber-chicanery, responsible for hacking attacks against some of the world's biggest companies. LulzSec -- a new group that emerged with great force this spring, taking on Sony, Nintendo, even the U.S. Senate -- is similarly locked-down. Still, in an official Anonymous chat room, I gabbed with one of LulzSec's founders and leaders.

Some background: This week, LulzSec emerged from early retirement to lay siege to the embattled News Corp. empire. On Monday, the group hacked into the website of the British tabloid the Sun, and posted a story that falsely claimed that Rupert Murdoch had passed away. Later, one of LulzSec's leaders, a hacker by the name of Sabu, announced he was sitting on top of a cache of confidential News Corp. emails, and said that he would release them shortly.

What grabbed my attention, in particular, was the name Sabu. The hacker was first ID'ed as a member of LulzSec last month, when private chat logs were leaked to the press. But I remembered reading the name even earlier, when Gawker released another set of chat logs back in March. The transcripts showed Sabu directing the activities of a particular arm of Anonymous responsible for several high-profile hacks -- including one of cyber-security firm HB Gary that revealed the company's attempts to discredit Salon's Glenn Greenwald.

I was curious to learn more about Sabu, so I started digging around. And, like other reporters before me, I headed to a group of chat rooms, both run and frequented by Anonymous, called "#AnonOps." The network is composed of a number of separate chats, many of them concerned with Anonymous's various, concurrent operations. (One room -- dedicated to the widely reported "Operation Anti-Security" -- was like a social libertarian's fever dream, filled with disparate, but overlapping and oftentimes heated, conversations about taxes, bank reform, U.S. military actions, etc.) Other rooms were meant for new members, for tutorials, for specific languages and nationalities. The chat room I entered was helpfully titled "#reporter."

Once inside, I explained that I was hoping to snag a conversation with Sabu. I was informed, however, that this might prove difficult. A chatter named "lolatu" told me that this particular day was "Claim To Be Sabu Day." Apparently, in a "Spartacus"-esque display of camaraderie, Anonymous members were claiming to be Sabu, so as to throw off the scent of enforcement officers hoping to track the hacker down. (Lolatu also helpfully informed me that "Spartacus" was a movie.)

While I never did get that interview with Sabu, I was able to speak on two separate occasions with Topiary, another founder of LulzSec, and the group's de facto press officer.

[Note: My actual handles during these conversations were "mib_e6ubr4" and "mrpants," which were randomly generated by the chat client. For the sake of clarity, I've subbed those names out, and identify myself as "Salon" in the (lightly edited) transcripts.]

Salon: Hi there. Sorry to intrude. I'm a reporter for Salon.com. Was wondering if you had a second to talk?
Topiary: Okay - just so you know, I've had no less than 12 publications (some very big three letter ones) contacting me today about News International emails
Topiary: but I don't know anything about them
Topiary: I know all about the Sun hacking, and the fake story (I wrote it) but nothing about the emails I'm afraid
Salon: I was actually wondering if you were at liberty to discuss LulzSec's reemergence from early retirement?
Salon: Like, what was the impetus?
Topiary: ah okay,
Topiary: The main motivation behind our return to the proxseas was the wrinkly-faced walnut Rupert Murdoch. We decided to rock up a storm from afar in conjunction with the media surrounding him, hoping to increase his frown more.
Topiary: LulzSec is not back, persay, but all of us are still here and we're watching -- if there's a special event, we may take action for high-quality entertainment purposes.

This is the LulzSec mode: Highfalutin, comically rude, littered with maritime allusions (LulzSec's fictional vehicle of choice is called "The Lulz Boat") and peppered with portmanteaus ("proxseas" = "proxy" + "seas").

Salon: The other thing I was wondering:
Salon: Why was [the News Corp hack] a LulzSec operation rather than an AnonOps?
Topiary: The Lulz Boat decided to engage in hostile fire against News International -- AnonOps/LulzSec are united for AntiSec (something we, LulzSec, started) but we're not overlapping on any other LulzSec-only operations.
Salon: So did you leave Anonymous when LulzSec was conceived?
Topiary: Anonymous is an idea and a consciousness. It's not a group or a company, so you can't really leave it.
Salon: I know both you and Sabu, and maybe others at LS, were involved in high-profile stuff for Anon in the past, e.g. HB Gary; was it that nucleus (i.e., the crew singled out in the Gawker chat leaks from March) that became LulzSec?
Topiary: Giving away a fact like that might harm operational security, but I confirm that some of them are in LulzSec -- LulzSec has 6 core members, myself and Sabu included.

Shortly after, Topiary told me that he had to leave. But Wednesday evening, I was able to grab him for another round of questions. This time I was curious about Topiary himself:

Salon: Hey Topiary. This is Peter from Salon again. I'd just ask for a few minutes, to ask about you, personally (that is, your motivations, hopes, fears, etc.; not your identity -- unless, you know, you'd like to tell me that too.)
Topiary: Howdy, what would you like to know?
Salon: With all the crackdowns recently, are you concerned you might get pinched by the cops?
Topiary: The short answer to that is no, the long answer is that I've received so many threats of being caught over the past 8 months (almost every day) that it doesn't affect me at all.
Topiary: Just disgruntled haters.
Salon: Were you ever scared, towards the beginning, of being arrested for your involvement in the ops you've helped with?
Topiary: There was a brief window where I was paranoid or that it irked me -- now I just laugh wholeheartedly.
Salon: Was there anything in particular that galvanized you to get involved in the first place?
Topiary: I got involved with AnonOps in November when I learned of the defense of The Pirate Bay -- I like TPB, they're good guys, so I joined in to assist in operations against copyright websites, and stayed ever since.

(The Pirate Bay is a website that, in part, aides in the download of pirated multimedia content. It's "one of the world's largest facilitators of illegal downloading," according to the Los Angeles Times.)

Salon: how's it feel to be lavished with so much media attention, all of a sudden?
Topiary: It's been building up over 8 months, and it's kind of annoying now. I don't like major media outlets contacting me daily trying to get some scoopage.
Topiary: So I respond to the smaller, more respectable outlets for exclusives, thus pissing off the big players.
Salon: does this conversation qualify as an annoyance, or tolerable?
Topiary: Tolerable :D