My guilty obsession with swastikas

I'm ashamed of my interest in the symbol, but as a designer I'm fascinated by the Nazi icon's enduring power 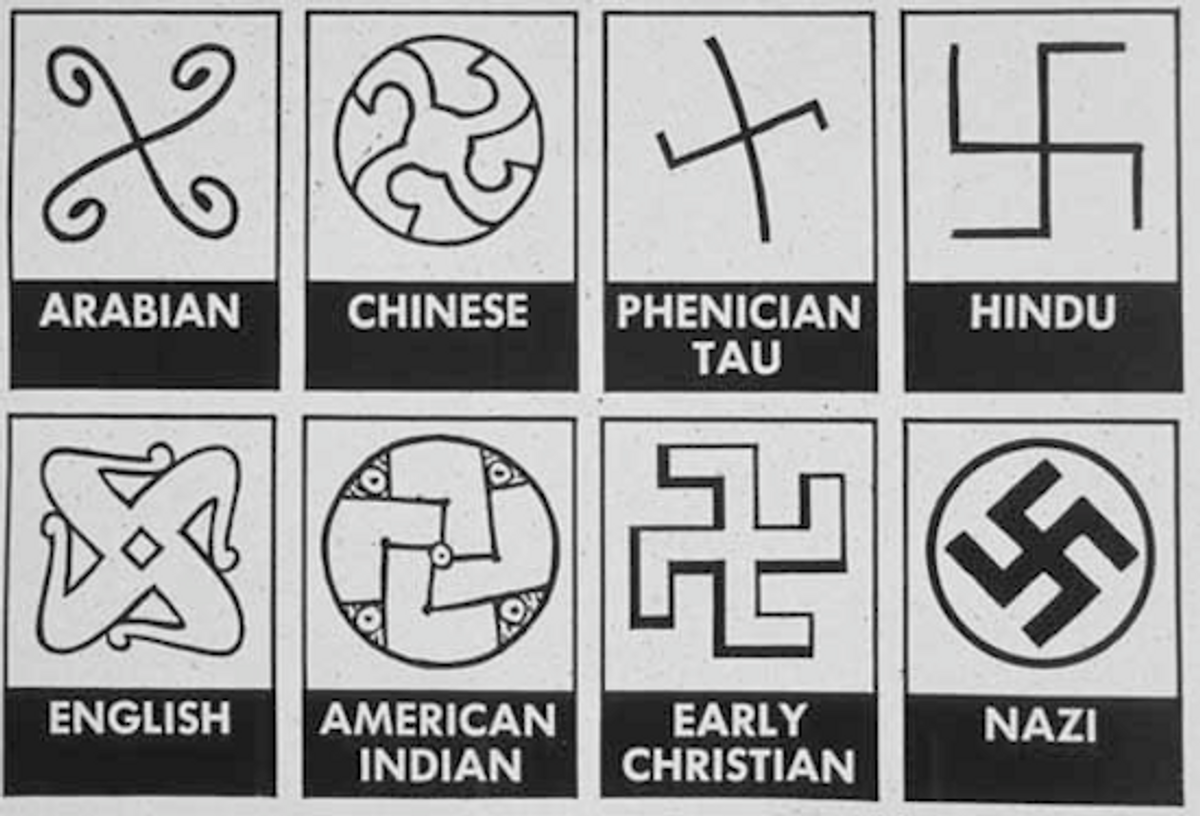 When I was 8 years old a friend gave me a Nazi flag that his father had brought back from the war as a souvenir. Despite my parents' warnings not to upset my grandmother, whose family (I much later learned) perished in Auschwitz, I would often streak through the apartment in her presence wearing the flag as a kind of Superman cape. At the time, I knew nothing about the Holocaust except that Jews were not beloved in Germany, but since religious taunting was common in my Manhattan public school, this fact had little consequence. I was also addicted to watching movies on TV about World War II and, as a wannabe artist, drew more pictures of Nazis than Americans because their uniforms were better. The German steel helmets, with those menacing ear-covering brims, were a thousand times more threatening than the GI "pots" or Tommy "pans."

As a designer I have long been fascinated by the unmitigated power of the swastika. Yet as a Jew I am embarrassed by my fascination. This paradox is one reason why I wrote the book "The Swastika: A Symbol Beyond Redemption?" Though working on it did not resolve my conflict. Indeed I have become even more obsessed with the symbol -- more drawn to yet repulsed by it.

I still own that Nazi flag and have subsequently amassed a collection of over 100 additional swastika artifacts, from buttons to banners of Nazi, neo-Nazi, and non-Nazi origin. And I feel guilty.

So over a decade ago I decided that I had to find out why this symbol (see video) had such hypnotic force for me (and others) particularly in light of the horrors it represents. I began researching the origins of the swastika as a Nazi symbol, which led me to seek out even earlier historical roots dating back to antiquity (even prehistory) when it was ostensibly benign.

How Adolf Hitler created an aesthetic that millions of people willingly followed is, for me, a continual source of bewilderment. The swastika was his instrument, though not solely the mark of his political party. It was his personal emblem -- his surrogate. Arguably, like any symbol it is only as good or bad as the ideas it represents. But as the icon of Nazism the swastika was transformed from a neutral vessel into monstrous criminality itself. A case can be made, and I try to make it, that the swastika is not the bottle in which an evil genie lived, it is the incarnation of that creature.

Studying the swastika has been a means for me to ameliorate my guilt over being a voyeur. I often wonder how my grandmother would feel about my book. She had emigrated from Galacia in the early teens. Her father had left her and two siblings in New York while he returned to collect the rest of the family. The Great War prevented his own emigration and after it was over he remained in Poland with his ill wife and younger children. The only time my grandmother ever spoke about the Holocaust was when I was 13 and she showed me a postcard from her father, which was dated 1940. She had received it a few years after the war. It was stamped with three official Nazi seals that included the swastika. The postcard had an acrid smell, as though it had been in a moldy sack for all that time.

The short message said everything was fine. But the swastikas said otherwise. In 1946 my grandmother learned of their fate. I always remember that smell when I see a swastika.

The postcard piqued my interest to the extent that I read whatever I found on the Holocaust (and in 1963 there was not a lot on the subject). I could not get the idea out of my mind that my own flesh and blood was subjected to such cruelty. I often pictured myself in their situation, being continually in fear, constantly abused, and ultimately murdered. I developed a healthy hatred for Nazis. Yet I continued to be engrossed (perhaps even awestruck) by their regalia, especially the swastika.

I accumulate and write about swastika material because I believe the form must forever be remembered as a kind of portal to evil. Because if I can be seduced by the swastika as a form, and I know the legacy, then just think how younger generations will be engaged as memory of Nazis fades (and other atrocities supersede it).

My book is a way for me to address two things: How Adolf Hitler came to adopt the symbol for the Nazis and what it meant before it was appropriated. I knew that it had other incarnations within other cultures; I had seen it on old greeting cards and architectural decorations. But even when I stumbled across benign applications I felt as though it was a knife in my face. So I began to read many vintage histories of the swastika. I learned that it had a long heritage and that in the late 19th century a swastika cult emerged in Germany within a youth culture similar to that of the hippies. I found that it was adopted by German racialist and nationalist cults, which imbued it with anti-Semitic connotations, and this filtered its way into the Nazi liturgy. I also learned that it had roots in various other lands where it was a sacred religious icon for Buddhists, Jains, Hindus, Native Americans, Africans, and many others, akin to the Cross, Star, and Crescent. When Hitler wrote in "Mein Kampf" about the mark's symbolism, however, he ignored all these earlier representations. In the mythology of Nazism the swastika was immaculately conceived -- it was Hitler's sole invention. Although this was false, Nazi myth triumphed over reality.

Since my book was published in March 2000 I have received various letters from well-intentioned people accusing me of bias. A Native American wrote that the swastika is his people's symbol and my assertion that it should never be revivified in Western culture is presumptuous and racist. He argues that the whites stole his land and now his icons. Another critic stated that no one remembers the logos of Attila the Hun or Genghis Khan, likewise in 1,000 years or less who will remember the symbol of Hitler's 12-year Reich. He feels that the ancient meaning of the swastika will ultimately triumph. Similarly, an Asian-American wrote that in his culture, the red swastika is his emblem of good fortune, and described how his local green grocer displays it in his shop. Why, he asks, if the meaning is diametrically opposed to the Nazis, should I care whether or not it is used in this cultural context?

My book has been called polemical. I agree. After laying down the history, I attack neo-Nazi uses of the swastika and condemn work by ignorant graphic designers who incorporate it into their hip graphics. I also argue against those who want to reclaim, through art, the swastika in its benign form. It is too late for such righteous attempts. The atrocities committed under this magnificently designed form must never be forgotten. Because the swastika has such allure, and because memory is so fleeting, it functions as a mnemonic.

People for whom the swastika has spiritual import have a right to this symbol; nonetheless, I would feel even more guilty if I did not take a stand against its use in our cultural context as anything other than an icon of evil.