Obama gets to play Ronald Reagan

He praised him on the campaign trail. Now he's channeling his ability to compromise. Why won't the GOP go along? 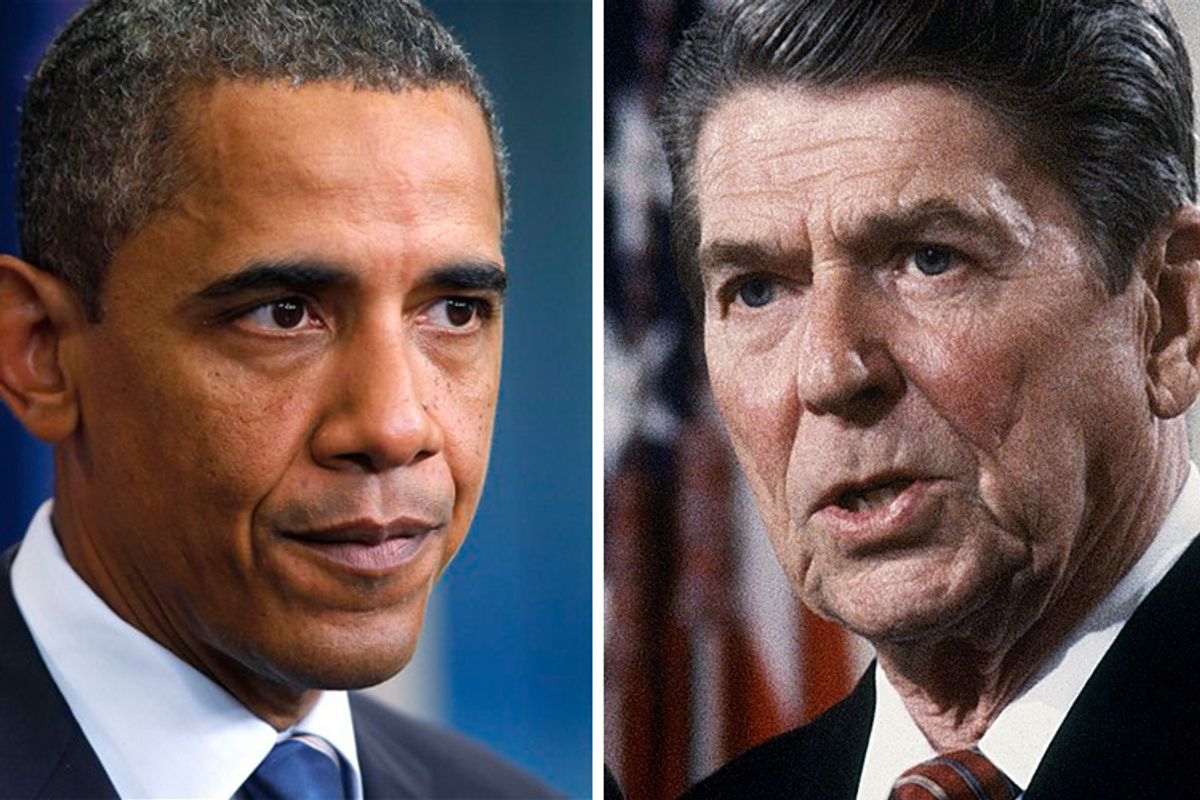 Earlier this week President Obama invoked Abraham Lincoln's Emancipation Proclamation to point to the value of compromise in American politics. Now Democrats and Republicans are fighting over what Ronald Reagan might have done with the debt crisis. It's nothing new in American politics: In this country with a relatively short history politicians like to look backward at what their predecessors might have done. It's also rather useless – especially when both sides leave out key parts of the historical picture.

I already talked about what Obama left out of his Lincoln story. Complaining that in today's climate, unhappy progressives would even have attacked Lincoln's proclamation because it didn't free all the slaves, Obama ignored that some progressives of Lincoln's day did exactly that. Now Republicans are invoking Reagan as the great tax cutter, to argue that he would back their decision not to include any revenues or taxes in deals to raise the debt ceiling. Democrats correctly note that Reagan raised taxes 11 times, and raised the debt ceiling an astonishing 17 times. Even better for Democrats, he made a fiery speech attacking those in Congress who wanted to hold the debt ceiling hostage for "bringing the country to the edge of default before facing its responsibility."

Steve Kornacki lays out at least some of the ways both parties are wrongly invoking Reagan. The booming deficit mainly created by his massive 1981 tax cuts (bringing the top marginal rate down to 28 percent from 70 percent) alarmed some in both parties, and they tried to tie a debt-ceiling hike to plans that would either raise taxes, force cuts or both. It was in that context that Reagan railed against congressional brinkmanship on the debt ceiling. He finally got an agreement, but it included a plan to cut the deficit by $23 billion. Reagan insisted he wouldn't raise taxes (sound familiar?) and the two sides deadlocked – until the October 1987 stock market tumble helped push Reagan and Congress into a compromise that included tax hikes.

So what can we take from that stalemate and its resolution? Reagan cared far more about protecting low tax rates than about deficit reduction – and ever since, Republicans feel the same way, and only care about deficits when a Democrat is president. Still, the most relevant point is: Reagan did compromise and raise taxes, as he compromised with Democrats many times. Tea Party intransigents, and their enablers in Congress, are refusing to do that, and there's no sign they're going to budge. Although we still don't know what a stock market tumble might do. If Wall Street freaks out, Mitch McConnell and John Boehner might wake up and realize who they work for, and bludgeon the Tea Party caucus into a deal.

It's also worth remembering that Reagan was a conservative, but he wasn't, as president, a radical. He was an ideologue about tax cuts, and yet he did wind up raising taxes many times anyway (but mostly payroll taxes, which hurt middle-income earners, not the rich). He tried to cut Social Security, and when Congress fought him, he wound up putting together a deal with Tip O'Neill to raise payroll taxes to protect it instead. In that sense, he was like Obama (whether I like it or not): When Congress blocked his agenda, he eventually found a way to compromise.

The other thing about Reagan I can praise is that he mostly respected the political process; he didn't try to use gimmicks like raising the debt ceiling to do an end run around the tough work of building support for spending cuts or tax hikes, year to year, via the budget process. There is something fundamentally anti-democratic in what's going on right now, where unless Congress passes the kind of clean debt ceiling increase it always has, plans like the "Gang of Six" deal will require that something on the order of $4 trillion in cuts with maybe some revenue hikes be rushed through both houses of Congress to avert disaster. Remember when the GOP claimed it didn't have enough time to read healthcare reform? The cuts under consideration will touch absolutely every area of the federal budget, under a crisis-shrunk, hysteria-tinged timeline. All this over a debt-ceiling vote that is almost always routine. Do you expect transparency in this process? And we wonder why people don't trust government.

I do need to part from the Reagan fan club, though, despite his comparative sobriety and statesmanship in a world gone mad. While he famously said he wasn't out to gut the New Deal -- it was the Great Society he was gunning for – he slashed the tax rates that made New Deal America, and post-World War II prosperity, possible. He also normalized a disdain for government that even Democrats now feel they have to echo. Maybe he didn't mean to kill the postwar American dream. A sunny optimist, Reagan tried to make people believe we could dramatically cut taxes and watch revenues rise, which would mean we could trim programs we didn't like or that weren't working, but we didn't have to sacrifice anything that mattered. Maybe he even believed it. When that didn't happen, he punted on the unpopular work of program cutting, and left the first peacetime deficit in American history.

It was a Democrat, Bill Clinton, who did the hard work of raising taxes, cutting spending and balancing the budget, and whether or not it was connected, the economy boomed. George W. Bush spent Clinton's budget surplus into oblivion; he and Cheney decided deficits didn't matter. (And they really didn't matter if you minimized them by keeping big spending off the books, as they did with Afghanistan and Iraq war spending.) They trashed the economy and at the same time ran up a record deficit, and left their mess for President Obama. Then, in a recessionary period when most economists urged more government spending to make up for missing consumer demand, Republicans decided deficits mattered, and blocked the stimulus Obama needed to turn the economy around, along with much of the rest of his agenda.

Obama worked with the Congress he had, compromising on the stimulus, and last year, backed an extension of the Bush tax cuts for the wealthy that he'd campaigned against. That was Reagan-like, whether I like it or not, but it didn't win him the respect, let alone the support, of Republicans. And here we are, with a Republican Party acting like economic terrorists, ready to ruin the economy if Obama doesn't cave, which would probably also destroy Obama's presidency.

But on MSNBC's "Hardball" today, former RNC chair Michael Steele laughed at me when I compared the compromising Obama to Reagan. He tried to insist the Tea Party-run GOP is trying to compromise. Steele tried the GOP's new stance: They can't trust Obama's willingness to compromise, because even though he said he supported the dismal Gang of Six compromise in concept, he hasn't laid out all the details of what would be cut. Chris Matthews hit Steele with the truth, noting that the loathsome "Cut, Cap and Balance" bill the House GOP supports (as does Steele, apparently) didn't lay out the details of what it cuts either. Details, apparently, like deficits, only matter for Democrats.

This is a grim spectacle and it's likely to get worse. Here's our "Hardball" conversation: