The party that does not know how to say yes 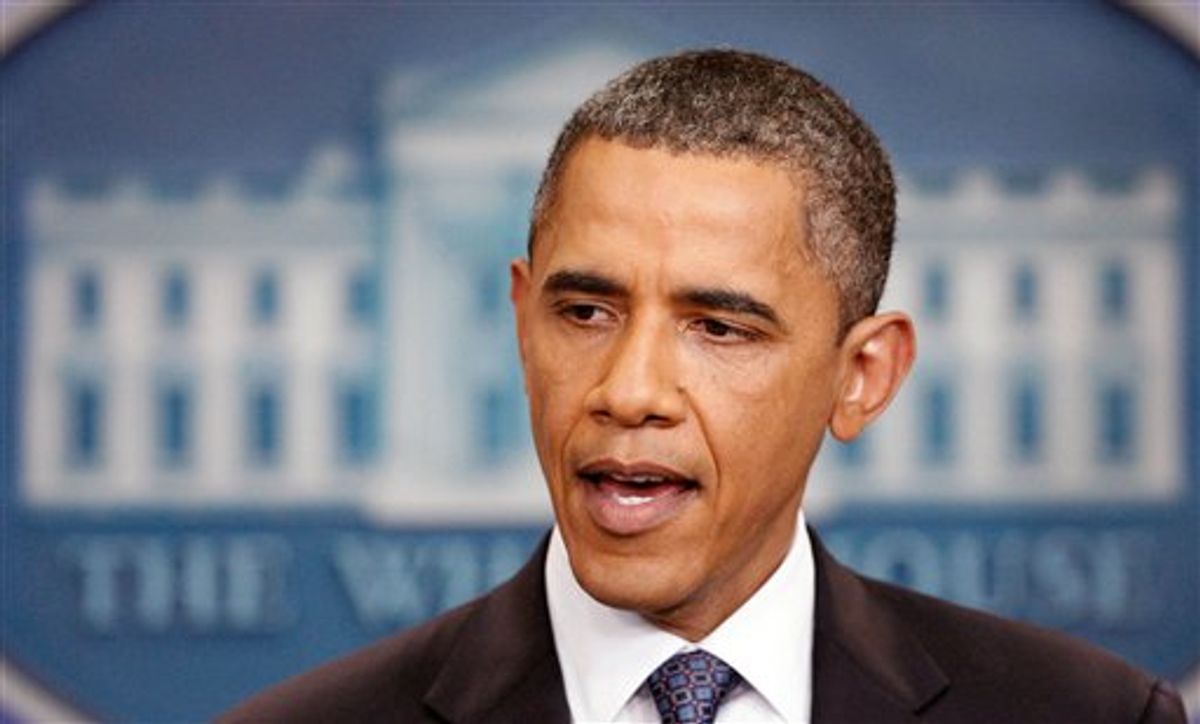 President Barack Obama makes a statement in the Brady Briefing Room at the White House in Washington, Friday, July 22, 2011 on the break down of debt ceiling talks. (AP Photo/Manuel Balce Ceneta) (AP)
--

A Friday afternoon that will live in infamy? Just hours after the markets closed in the United States, Speaker of the House John Boehner released a statement announcing that he was abandoning negotiations on a debt ceiling deal with President Obama. The White House, he wrote, "is simply not serious about ending the spending binge that is destroying jobs and endangering our children's future."

The timing was significant. If Boehner had bailed on negotiations while markets were open, the Dow would have plummeted -- and with good reason. There are very few people outside of the House Republican caucus who can understand why in the world Boehner would reject the offer Obama had put on the table.

Moments later, President Obama gave a press conference, and expressed, in no uncertain terms, his very irritated disbelief that the Republicans were walking away from a deal that he characterized as "extraordinarily fair" -- a deal that required him "to take a lot of heat from his own party," a deal that Senate Majority Leader Harry Reid and House Minority Leader Nancy Pelosi "were very unhappy with."

"They sure did not like the plan that we were proposing today, but they were at least willing to engage in this conversation" said the president. "I have not seen this capacity on the part of the House Republicans."

Haven't we been here before? Just two weeks ago, Obama was offering a package of spending cuts that made his own party extraordinarily nervous. Boehner walked away. This week, by all accounts, the president offered a deal even more generous, and spurred a near-revolt in his own party. Just 20 minutes before Obama's press conference, Sen. Bernie Sanders called for him to be primaried! And now Boehner is walking away, again, declaring that the only basis for a deal has to be the Cut, Cap and Balance bill passed earlier this week by the House, but rejected Friday morning by the Senate.

And so we go around again. The only differences: There's less time before the deadline hits, Republicans rejected an even better deal than they had been previously offered, and Obama's reaction to their intransigence came out considerably stronger. You could even say he was mad. And I've got to say, mad works for him.

Obama has a right to be annoyed. As he said, "I have been left at the altar now a couple of times. The Republican Party is going to have to ask themselves, can they say yes to anything?"

The answer to that is obviously no, if what House Republicans are being asked to agree to includes any semblance of a compromise with Democrats. Let's be clear here -- the Cut, Cap & Balance bill is not a compromise. It is far more extreme than the Paul Ryan budget, which proved to be hugely unpopular with the general public. It would force massive cuts in government programs that are enduringly popular. Enacting it would turn into a sure political disaster for the Republican Party.

John Boehner has been around the block. He has to know that. But what has been established beyond all doubt in the last two weeks is that Boehner cannot deliver his caucus. After Obama finished speaking, Boehner addressed the nation and repeated the boilerplate from his letter: "The White House won't get serious. We will." But to anyone who has followed the ins and outs of the last few weeks of negotiation, his stance is nonsense. The truth is that Boehner simply cannot make a deal. His caucus forbids it. Compromise with Obama would mean the end of his political career.

What's all the more amazing about this denouement is that Boehner's decision to bail on negotiations gave Obama an opportunity to deliver the kind of defense of the social welfare state that his supporters have been hungering for. He worked himself practically into a lather as he explained why Democrats were insisting that some revenues be part of any deal.

"If you do not have any revenues, if you have no revenues at all, what that means is more of a burden on seniors, more drastic cuts to education, more drastic cuts to research, bigger cuts to services for the middle class. It doesn't ask anything of corporate jet owners, oil and gas companies, and people like me, who've done very well." Republicans, he said, were demanding "a package that would effectively require massive cuts to Social Security, Medicare, and domestic spending, while not asking anything from the wealthiest of this country."

"If that's their only answer it's going to be pretty difficult to figure out where to go."

Obama said he had called the leaders of both parties to meet at the White House at 11 a.m. Saturday to figure out what to do next. It will very interesting to see whether the McConnell-Reid "backup plan" to give Obama power to raise the debt ceiling gets fast-tracked again. The president was not lying when he declared "we are running out of time." Perhaps the most astonishing thing about Boehner's decision to abandon ship is that it almost ensures that financial markets will be in a state of shock come Monday morning. In effect, that would appear to strengthen the Democratic hand. Does Boehner really want to be remembered as the man who steered the United States straight into the abyss?

By the end of his press conference, Obama was sporting a steely glare that many of his supporters would like to see more often. And there was little disguising the contempt in his voice when he delivered his final linne.

"At some point, I think, if you want to be a leader, then you've got to lead. Thank you very much."