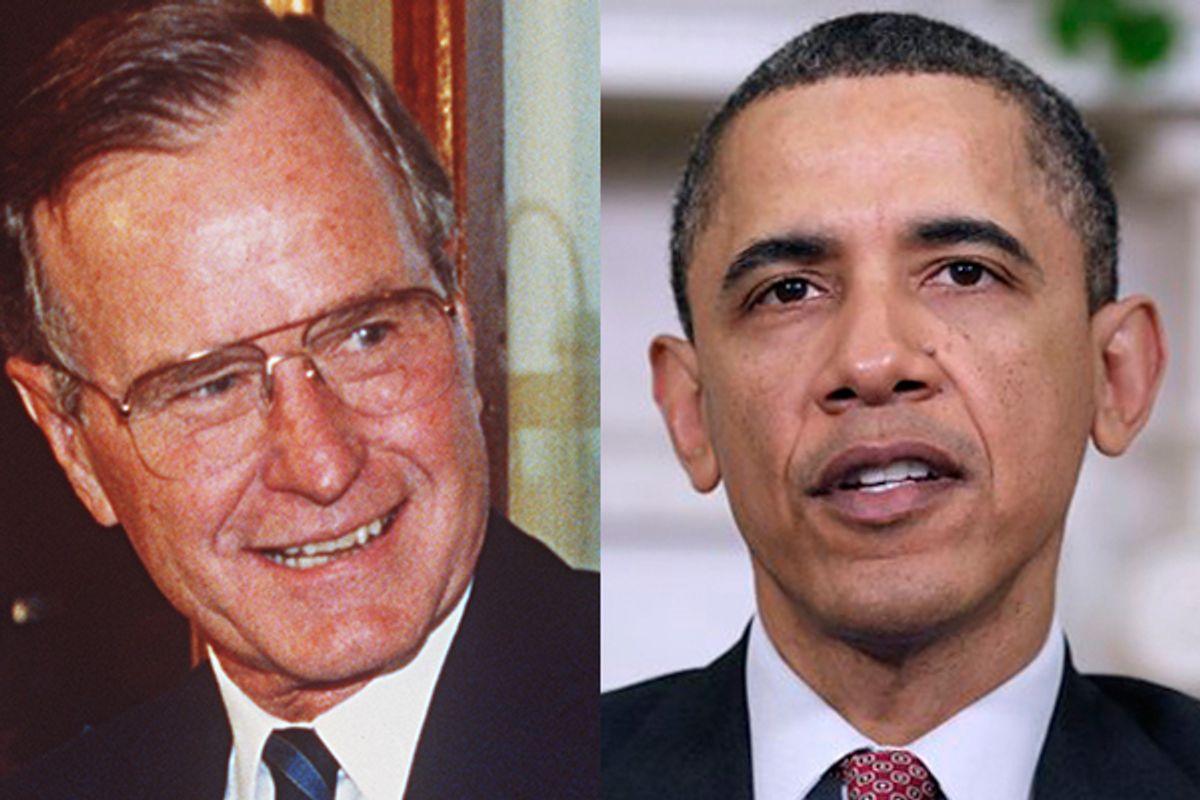 Let's stipulate that we don't know yet whether there will even be a "grand bargain" deal between President Obama and House Speaker John Boehner, much less what the precise details of any deal might look like.

But it's hard to ignore the fury that the latest reports, which suggest a compromise that would aim to produce $3 trillion in savings from spending cuts and only vague, conditional promises of new revenue in the future, are prompting from Democrats and activists and commentators on the left.

If Obama does end up pursuing something like this, he may be left relying on Republican votes to enact it, a situation that would call to mind one of the last suspenseful Washington showdown over deficits: The 1990 budget deal, in which President George H.W. Bush formally went back on his "No new taxes!" pledge and cut a sweeping deficit reduction deal with congressional Democrats. It ended up haunting Bush in varying ways for the rest of his presidency.

The '90 agreement was the product of more than six months of negotiations between Bush and a bipartisan group of congressional leaders. Deficits were soaring and Democrats, who controlled both houses of Congress, demanded that any plan include a significant revenue component. Despite his '88 rhetoric, Bush had always been more of a pragmatist and was willing to go along, and so were Bob Dole and Bob Michel, the pragmatic conservatives who led the GOP in the Senate and House.

The drama unfolded in two phases. In the first, a plan was drawn up that relied heavily on fees, excise taxes, cuts in social welfare programs, and new restrictions on tax deductions. The aim was to cut the deficit by $500 billion over five years, and the idea was for Bush to be able to say that he hadn't raised income tax rates on anyone -- and to keep conservative Republicans, particularly in the House, in line. But this ended up infuriating Democrats, who believed the deal put far too much of the burden on middle- and lower-income Americans. At the same time, conservatives in the House -- urged on by a rising star named Newt Gingrich -- still rallied in opposition. In early October '90, the deal went down to defeat in the House by a 254-179 margin. A majority of Republicans (by a 105-71 margin) and Democrats (149-78) opposed it.

This triggered a brief government shutdown and a sharp drop in Bush's approval ratings, which had been almost unnaturally high during his first two years on the job. With the midterm elections approaching, Bush then compromised further with Democrats, who had majorities in both chambers, agreeing to a plan that shifted more of the burden to the wealthy by raising the top marginal income tax rate from 28 to 31 percent.

A full-scale revolt from the right ensued, with conservative leaders branding Bush a sellout. When the new deal came up for a vote, the partisan divide on Capitol Hill was clearer. In the House, Republicans overwhelmingly opposed their own president's plan by a 126-47 margin. Democrats backed it by a 181-74 spread. It passed the Senate, where the GOP's ranks weren't as conservative, on a 54-45 vote and was signed by Bush in early '90.

To the anti-tax right, all of this served to confirm their long-held suspicion that Bush wasn't really one of them. He'd run for president in 1980 as a moderate Republican, deriding the supply-side theory that Ronald Reagan championed as "voodoo economics." At that time, Bush's wing of the GOP was still a force, but Reagan's was the future. By the end of the decade, supply-side theory had become GOP gospel, and Bush had reinvented himself as a true believer. This was the backdrop for his "Read my lips: No new taxes" proclamation at the party's 1988 convention. It was all enough to convince conservative leaders to put their doubts aside and to help Bush succeed Reagan.

But Bush, with the '90 budget, showed that he'd been faking it -- a fact that one conservative voice after another was happy to point out. Measuring how badly this hurt him with Republican voters, though, is tricky. As the deal was reached in October '90, Bush's approval rating among GOP voters slipped 20 points. However, the budget drama coincided with Operation Desert Shield -- the massive buildup of U.S. forces in the Persian Gulf in advance of the January 1991 war that expelled Iraq from Kuwait. That story quickly eclipsed the budget fallout in news coverage, and Bush's standing with Republicans soon improved. And by the spring of '91, when the war was over, his poll ratings -- with Republicans and with all Americans -- were stratospheric. It was like the tax deal had never happened.

But then, when the afterglow of the war faded and the feeble economy took center stage, it reared its head again, complicating Bush's reelection chances in several ways.

First, Democratic congressional leaders urged Bush to join them in crafting an aggressive stimulus plan, but he resisted because he didn't want another bitter fight with his own party. Who knows? If Bush had been in position to force a stimulus plan on the GOP, it might have boosted the economy just enough to reverse the outcome of the 1992 general election.

There was also the matter of Pat Buchanan, then best known as the co-host of CNN's "Crossfire," who announced at the end of 1991 that he'd challenge Bush in the '92 GOP primaries, making his tax cave the central issue of his campaign. "Read our lips!" groups of angry Republicans would shout in Buchanan's ads. In fiercely anti-tax New Hampshire, Buchanan ended up netting 37 percent -- a 16-point loss that was interpreted by the press as a repudiation of Bush. Buchanan did substantially worse in subsequent states and never seriously threatened to win the nomination, but he was a consistent thorn in Bush's side for the first half of 1992. In fact, it was in an effort to mollify Buchanan and his right-wing base that Bush agreed to stage a "red meat" convention in August '92, embracing far-right themes and far-right speakers in a display that may have hurt the party's image with swing voters. This, too, could be considered a consequence of the '90 deal.

The "Read my lips!" cave also gave Bill Clinton an irresistible talking point in his campaign against Bush. To shore up his support with the GOP, Bush had taken to claiming that giving in on the tax increase had been a mistake. But this allowed Clinton and the Democrats to paint Bush as a weak leader: He'd made an ironclad pledge, then gone back on it (supposedly for the good of the country), and now was insisting it had all been a terrible mistake and that he'd never do it again. "The real mistake he made," Clinton said at a debate, "was the 'Read my lips' promise in the first place.'"

The question for Obama, if he does pursue a plan that alienates his own party, is whether he'll face similar repercussions.

In some ways, he's probably more protected from long-term damage with his party than Bush was, simply because Bush's own party base never really trusted him. He was a relic, an old Eastern Establishment Republican who'd masqueraded for a few years as a supply-sider to win the White House. So it was fairly easy for the right to turn on him. Obama, by contrast, is a creation of his party's base. Yes, he's faced plenty of criticism from activists and commentators on the left, but so far it hasn't trickled down to the rank-and-file. Maybe it's about to. But it's also possible that most of the Democratic base still feels a strong connection to Obama, believes he's mainly been a victim of Republican sabotage, and would give him the benefit of the doubt even if his own congressional party breaks with him on a debt ceiling agreement.

The other lesson from Bush is that a president can get away with alienating his base if his overall popularity is high enough. In the months after the '91 Gulf war, it hardly seemed to matter that he'd broken his tax promise. But when the economy began dragging down Bush's numbers, it became an issue again. It's probably just as true for Obama: If he does take a hit with his base in the next few weeks, there won't be much long-term damage if the economy returns to life. Of course, this has been true for just about every challenge he's faced during his presidency.