Slide show: It isn't easy to deliver five flawless performances in a row. These actors turned the trick 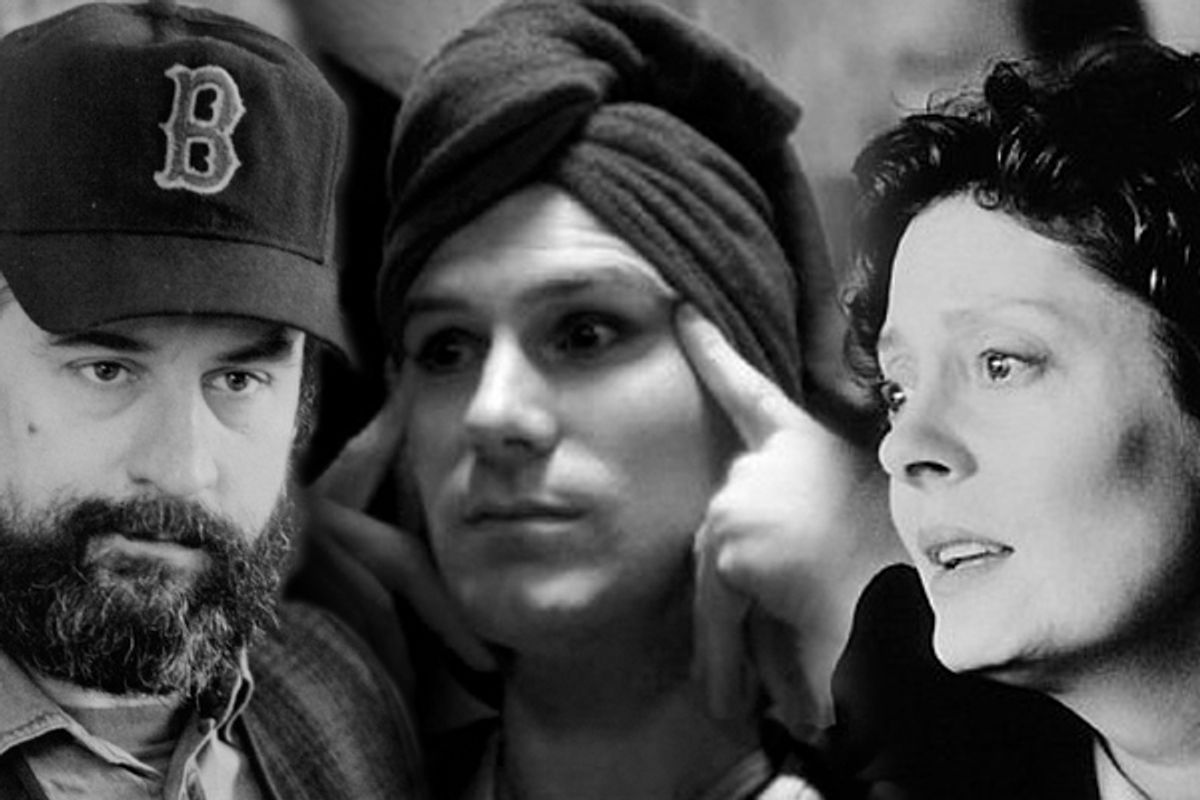 I love the idea of the Five Test. Steven Hyden of the Onion A/V Club first proposed it in a July 19 article asserting that the best test of pop musicians' greatness wasn't popularity or critical esteem, but consistency of output, and that one good way of measuring that was to ask if the musician had released five albums in a row consisting of nothing but great material; if the answer is yes, they have to be admitted to the pantheon of greats. "Lots of artists have five or more classic albums (not including EPs or live records)," he wrote, "but the ability to string them together back-to-back means being in the kind of zone that's normally associated with dominant college women's basketball dynasties." Independent Film Channel columnist Matt Singer riffed on this notion, proposing a "Five Films" test for directors. I disagree with some of the writers' picks for "great" musicians or directors, and I suppose it goes without saying that "great" is as subjective a word as "beautiful." Still, it makes for a fun exercise, if only because it forces writers to put their taste on display and invite readers to throw rotten fruit at it.

This slide show expands the Five Test to performers. I spent the better part of an afternoon combing through actors and actresses' résumés, looking for instances where my favorites gave five great performances in a row. By "great" I mean iconic, memorable performances or else ones that were so technically impeccable yet lively and intuitive that you could show them to aspiring actors as examples of how to do it right. And there had to be an element of surprise in each performance. I didn't include any runs of five films where an actor or actress did pretty much the same thing they always do, but with different character names. Each performance had to have a quality that made me think, "Wow, I always liked/respected that actor, but I didn't know they were capable of that."

The exercise proved much harder than I'd expected going in, for reasons that have nothing to do with the performer and everything to do with the business they have chosen. It's tough to put out five great albums or direct five great movies in a row because there are so many artistic, economic and personal variables that can dilute or damage a work. But at least pop music groups and directors are (at least theoretically) in control of their output. Actors, even rich and famous ones, don't often have as much say in how films are written, directed or edited, and this was especially true during the studio era. I thought it would be a cinch to find five or even 10 performers who passed the Five Test just by concentrating on the pre-World War II era of cinema, when actors were under contract to studios and routinely appeared in a dozen films a year or more. But, unfortunately, a lot of those films were forgettable, and the actors' performances in them were no more than competent. That's why James Stewart and John Wayne aren't on this list; they gave an amazing number of indelible performances, sometimes three or even four in a row, but then there'd be a paycheck or contract job breaking their Five Test momentum like a speed bump.

That said, I did find five performers who had runs of five performances that I would call great. I did not include television work because it seemed like apples and oranges. But I did mix supporting and lead roles, because Constantin Stanislavski got it right: There are no small parts, only small actors.