How dare meteorologists describe a weather event with the correct, Arabic-derived term? 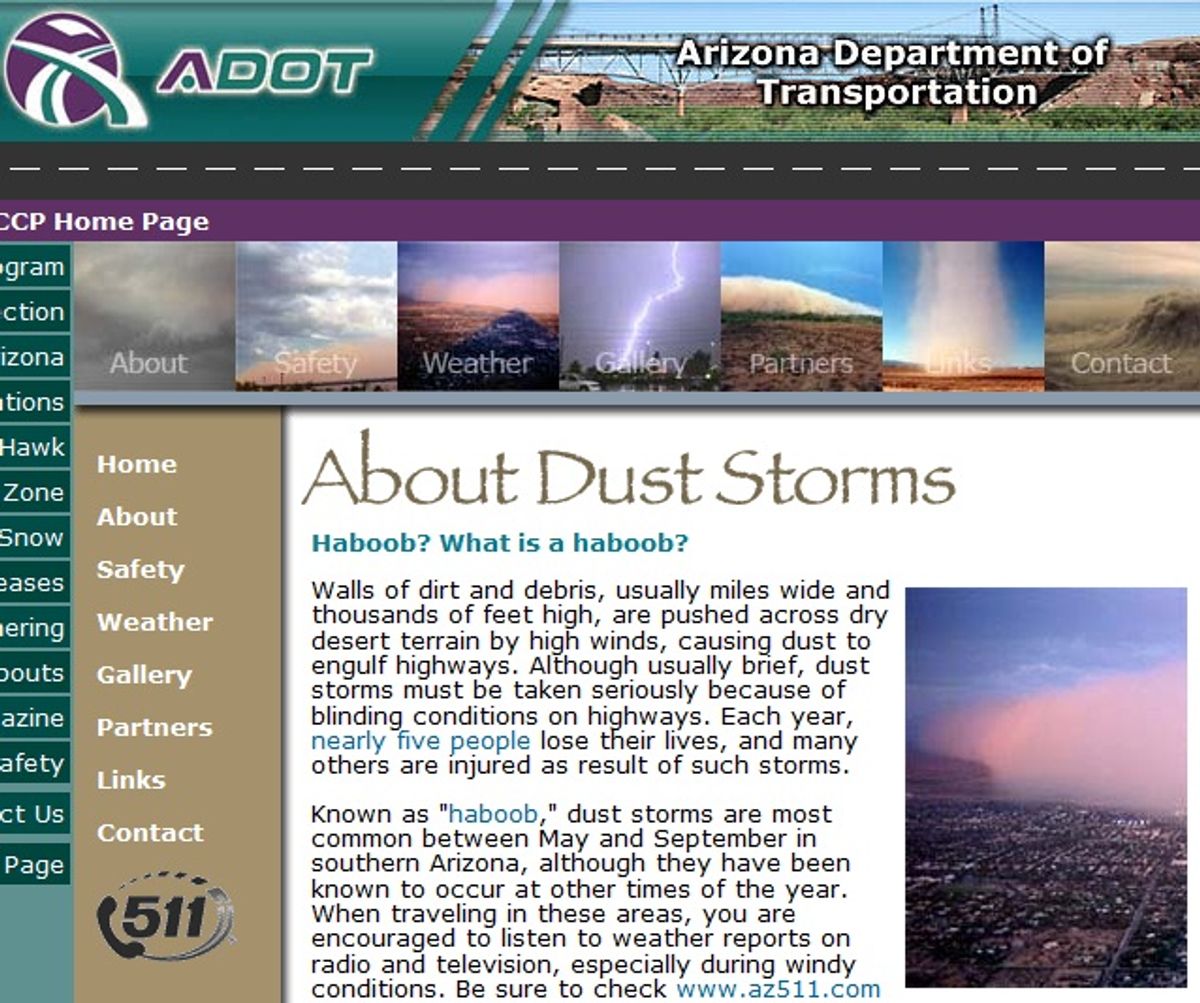 The Arizona Department of Transportation explains what a haboob is
--

A few years back, Arizona got sick of the fact that Texas and Mississippi and Alabama were always the butts of the rest of the nation's jokes about halfwit xenophobic gun-toting pissed-off old white folk, and so The Grand Canyon State decided to really kick it up a notch, in terms of bad craziness and hatred. The tireless work of Governor Jan Brewer, State Senator Russell Pearce and Sheriff Joe Arpaio paid off! Thanks to those three, Arizona is no longer defined by its amazing geography, rich history, and rugged, independent residents. No, when you think of Arizona in 2011, you think of a bunch of armed racist morons.

Yet another example of the hysterical, small-minded stupidity of the people of the great state of Arizona made it to today's New York Times. With massive, dangerous dust storms sweeping through central Arizona, the populace is obviously very worried -- about MUSLIM WORDS.

The blinding waves of brown particles, the most recent of which hit Phoenix on Monday, are caused by thunderstorms that emit gusts of wind, roiling the desert landscape. Use of the term “haboob,” which is what such storms have long been called in the Middle East, has rubbed some Arizona residents the wrong way.

“I am insulted that local TV news crews are now calling this kind of storm a haboob,” Don Yonts, a resident of Gilbert, Ariz., wrote to The Arizona Republic after a particularly fierce, mile-high dust storm swept through the state on July 5. “How do they think our soldiers feel coming back to Arizona and hearing some Middle Eastern term?"

Yep. Think of the soldiers!!! When they come home to Arizona I'm sure they will get very upset at the thought of someone describing these massive wind storms with an Arabic term. An Arabic term that has long been used, in America, by meteorologists and others, to describe these storms. Because it is the word for these storms.

The Arizona Department of Transportation's website has an entire section on haboobs -- a section that dates back to at least late 2005. (Sharia had already crept into the DoT!)

As Adam Serwer pointed out earlier today, English has so, so many Arabic loanwords already. Of course, that's just proof of how long those Muslims have been infiltrating our society!

For a real laugh, check out people moaning about hearing this foreign terrorist word on the Weather Channel's Facebook post.

Steve Schaper: I remember back when they were called "dust storms" an English term. The current preference for Arabic in meteorology is curious.
July 6 at 1:19pm

Dale Stanton: What's the problem with using American English? It's a dust storm. D-U-S-T S-T-O-R-M. This one happened in Arizona, not the middle east.
July 6 at 1:20 PM

Joshua Westbrook: were not in india
July 7 at 1:43pm

Hah, everyone is awful.