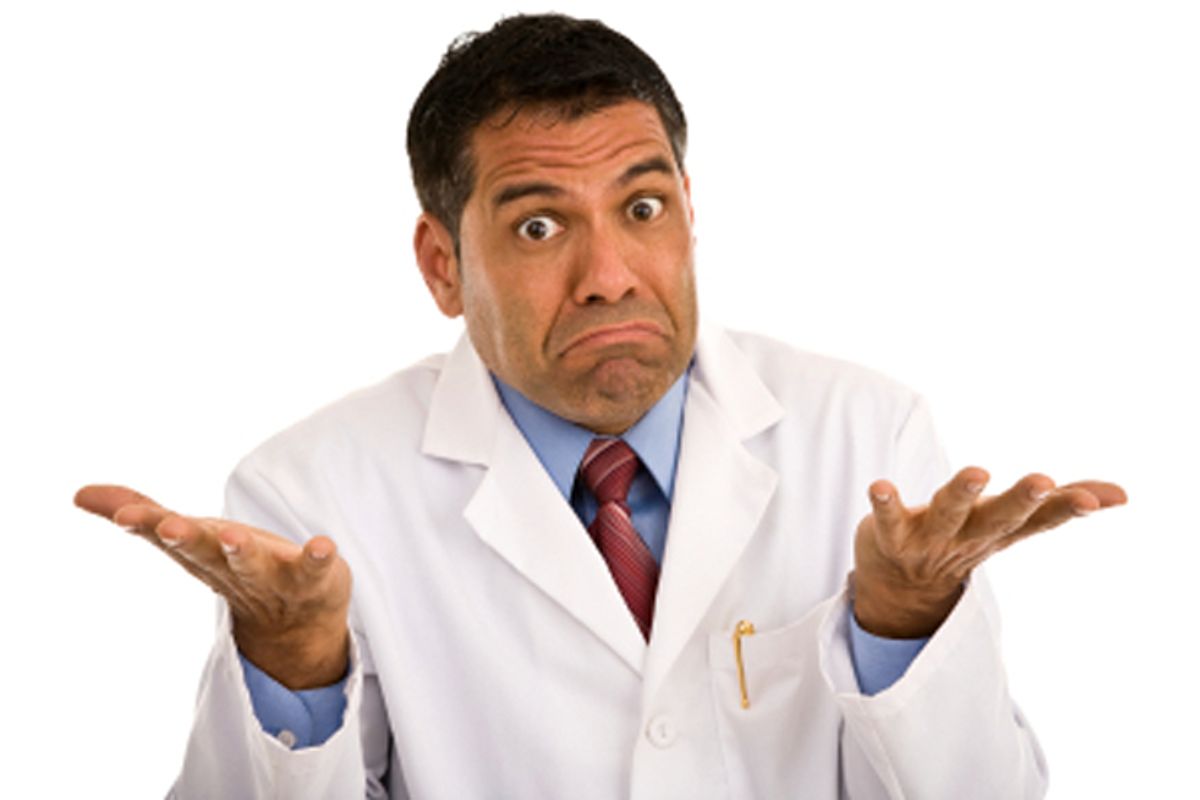 I had a dream last night -- well, a nightmare, actually -- in which the debt ceiling ruckus insidiously morphed into a replay of the battle over healthcare reform. There was John Boehner, declaiming on the House floor, channeling Winston Churchill to express his party's opposition to raising taxes on the rich ("whatever the cost may be, we shall fight on the beaches, we shall fight on the landing grounds, we shall fight in the fields and in the streets, we shall fight in the hills; we shall never surrender!") and then, without missing a beat, the speaker launched into an attack on Obama's socialist takeover of the healthcare system. No, no, I moaned, I already lived through 2009, I can't do this again! Let the courts decide the fate of "Obamacare," or the 2012 election. The debt ceiling showdown is stupid and ridiculous and incredibly dangerous all by itself -- we don't need to get the Affordable Care Act involved.

And then I woke up, and read the New York Times and realized it wasn't a dream. Like a plague of zombies, the GOP assault on Obamacare was back, eager to eat my brain.

Details are in short supply as to the actual nature of the deal under negotiation between President Obama and Boehner. But there appears to be some consensus that Obama is willing to agree to a big package of cuts now, in exchange for a tax "reform" package to be named later.

Ah, but how to make sure that tax reform actually happens, once the debt ceiling deal is cut?

But the president and Mr. Boehner were moving ahead with their plan, aides said, trying to agree on matters like how much new revenue would be raised, how much would go to deficit reduction, how much to lower tax rates and, perhaps most critical, how to enforce the requirement for new tax revenue through painful consequences for both parties should they be unable to overhaul the tax code in 2012.

The White House wants a trigger that would raise taxes on the wealthy; Mr. Boehner wants the potential penalty for inaction to include repeal of the Obama health care law's mandate that all individuals purchase health insurance after 2014.

Interesting! The Bush tax cuts are set to expire in 2012. So if Republicans don't hold to the bargain, something that is legally mandated to happen anyway in 2012 would automatically take place. In other words, there is already a trigger that would raise taxes on the wealthy. It's called the law, as currently written. But if Democrats don't keep their side of the deal, they lose the primary progressive achievement of the Obama administration. This, as Michele Bachmann would say, is a whole lot of chootspah.

First, the hostage-holding bank robbers asked for $10 million in cash and a helicopter ride out of the country. When those demands were met, they asked for another $100 million, a private Lear jet, free massages, and a signed note of apology from the SWAT team that was obnoxiously pointing guns at them during the negotiations.

The individual mandate, readers might recall, was originally a Republican idea, a crucial part of the GOP's strategy to preserve a private market for healthcare insurance and fend off the evil specter of true, government-provided universal healthcare coverage. But once Obama was elected, the notion that everyone should be required to have health insurance so as to make it economically feasible to cover, well, everyone, somehow became a betrayal of all that is good and decent about the United States of America.

It's also probably worth mentioning that the Congressional Budget Office analysis of the Affordable Care Act has scored it as likely to reduce the deficit. This seems like a relevant thing to bring up in the context of a discussion of the debt ceiling. Boehner's proposed penalty is to scuttle a government healthcare reform that, on paper, is supposed to lower the deficit.

Well, heck, why not? If we are to believe current reports, Obama has agreed to significant cuts in Medicaid and Medicare without any quid pro quo except for promises of tax reform in the future. That's a huge win for Republicans. So why not go for broke -- why not gamble everything on knocking out the one triumph Obama can hang his hat on?

If we needed any further demonstration that the fight over the debt ceiling isn't really a fight about how to get government finances in order, but is instead simply about one party's determination to use the threat of economic disaster to wage total political warfare, then we have it now. Congressional Democrats are absolutely correct to be distraught at the direction this evolving mess is headed. But will they show the resolve of their Republican compatriots in the House and draw their own line in the sand? If recent history is any indication, the answer is no.