Boehner and Obama: Can they stand the heat?

Recipe for chaos: Time is running out, and the rank-and-file of both parties don't trust their leaders 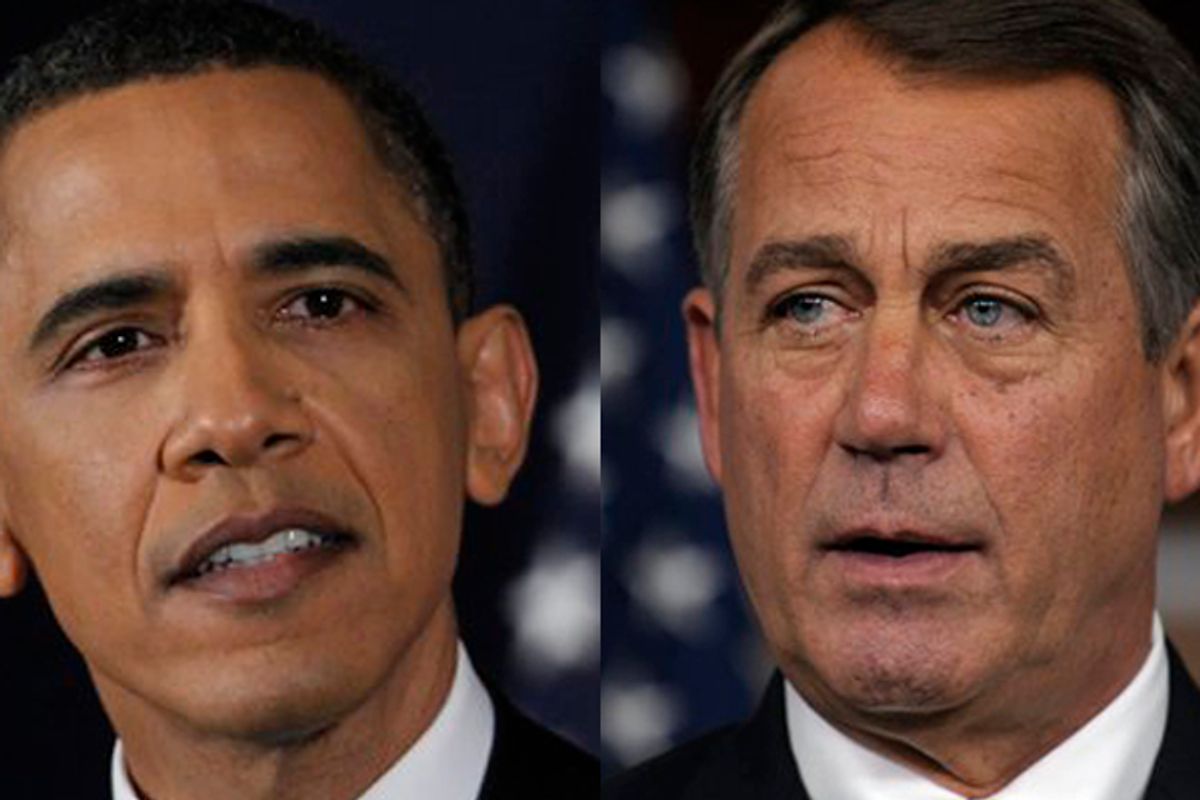 House Speaker John Boehner has a meteorological warning for his fellow Republicans: "It is going to be a hot weekend here in Washington, D.C.," he said Friday, while assuring his colleagues that he was "not close to an agreement" with the White House.

With the temperature cracking 100 degrees in Washington (and nearly everywhere else on the East Coast), his listeners hardly needed the forecast. But as metaphor, Boehner's words were surely dead on. The House of Representatives has adjourned. The Senate will not be in session this weekend. There are barely enough days left on the calendar before the Aug. 2 debt ceiling deadline to move any legislation through the Senate, and the only action in town appears to be a series of meetings between Boehner and the White House. Let's hope they have air conditioning.

In a town hall meeting on Friday morning, President Obama said, "This was a rare opportunity for both parties to come together." But outside of Obama, there's precious little indication that either side is willing to make serious compromises. Nancy Pelosi announced a list of spending cuts she said she was willing to entertain, but cuts to Medicare, Medicaid and Social Security were not on the list. Meanwhile, Republicans continue to oppose any and all revenue increases.

This puts Obama in the unenviable position of offering cuts to entitlements that his own party loathes in return for revenue increases (or a promise to consider revenue increases) that the opposition party considers anathema. Whatever happens, someone will be screaming in agony.

And the debt ceiling deadline keeps getting closer. On Thursday, Republican Rep. Tom Latham introduced a bill aiming to determine who, in the event of a failure to raise the limit, should get paid and who should get stiffed.

Here, in its entirety, is the Protect Spending Priorities Act:

(1) Amounts necessary to carry out the authority of the Department of the Treasury provided in section 3123 of title 31, United States Code, to pay with legal tender the principal and interest on debt held by the public.

(2) Such amounts as the Secretary of Defense (and the Secretary of Homeland Security in the case of the Coast Guard) determines to be necessary to continue to provide pay and allowances (without interruption) to members of the Army, Navy, Air Force, Marine Corps, and Coast Guard, including reserve components thereof, who perform active service.

(3) Amounts necessary for the Commissioner of Social Security to pay monthly old-age, survivors', and disability insurance benefits under title II of the Social Security Act.

(4) Amounts necessary for the Secretary of the Veterans Affairs to pay compensation, as such term is defined under section 101(13) of title 38, United States Code.

(5) Such amounts as the President certifies to the Congress are necessary to carry out vital national security priorities.

(6) Amounts necessary to make payments under the Medicare program under title XVIII of the Social Security Act.

(7) Such amounts as the President certifies to the Congress are necessary to carry out Government functions necessary for protecting public health and public safety.

Last week, I provided my own summary of what would get left out after prioritizing payments for the most politically sensitive priorities. Megan McArdle did an even more lethal job this week, and it bears repeating:

Does the prioritization listed above mean that we don't need to cut politically untouchable programs?

No. Let's think through what would happen if we tried to use this plan:

You know what I think when I read that list? I think that if the White House had made it crystal clear from the beginning what the exact consequences of a failure to raise the debt limit would be, public pressure against Republican irresponsibility would give Democrats a much stronger hand in negotiations. It seems inconceivable that Obama feels he must keep compromising, and must keep making bigger and bigger concessions, when the main leverage enjoyed by the other side is a promise to plunge the United States into politically unacceptable chaos.