The master portraitist, who died this week, evoked indignity and delight from his subjects 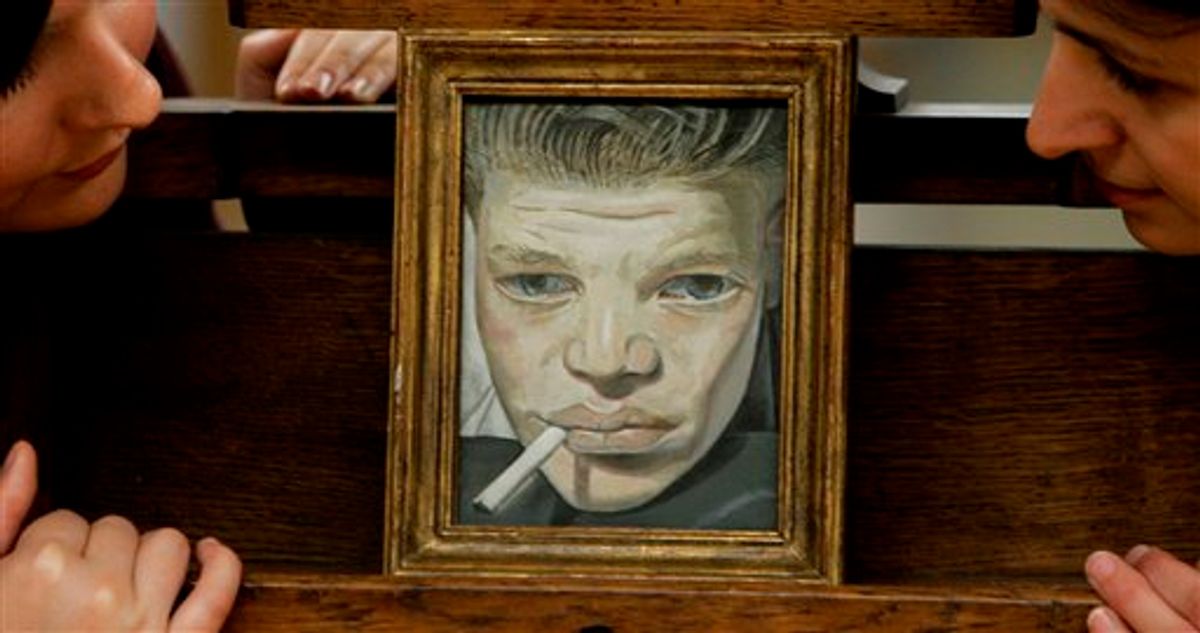 FILE In this Oct. 29, 2007 photo, people look at a painting by Lucian Freud entitled, '"Boy Smoking ", dated 1951-2., part of the Simon Sainsbury Bequest unveiled at the Tate Britain gallery in London. Lucian Freud, a towering and uncompromising figure in the art world for more than 50 years, had died after an illness, his New York-based art dealer said Thursday, July 21, 2011. He was 88. (AP Photo/Alastair Grant) (AP)
--

Lucian Freud, who died Wednesday in London, certainly left behind an artistic legacy that "guarantee[s him] a unique place in the pantheon of late 20th-century art" (as the director of Britain’s Tate Museum has said) -- but that's hardly all.

Though Freud himself was famously press-shy, his subjects weren't; a certain mythology has grown up around the experience of sitting for the painter described as "a beacon for those who still believe in the importance of the painted portrait" and "the foremost figurative artist of his generation."

Perhaps most notably, British critic Martin Gayford described his own seven-month sitting experience in the book "Man with a Blue Scarf" -- and in this shorter article, written last fall for the London Times. (Gayford has also written some reflections on Freud's death, which you can read here.) Here's a short excerpt from Gayford's 2010 Times piece:

After half a year, I remarked that I might have changed since the beginning -- my hair was probably greyer, for instance. “Oh, have we been working for six months?” [Freud] replied, mildly surprised. “It seems like five minutes.”

We talked about everything from Goya and Rembrandt to what was in the day’s newspaper. Freud, who is fond of poetry, quoted from memory works by Larkin and Byron, and recited several of Hilaire Belloc’s Cautionary Tales. One afternoon he gave a creditable rendition of a calypso he heard on a voyage to the Caribbean in the early 1950s: “Well it was love, love alone/Caused King Edward to leave his throne.”

In 2004, the BBC filmed interviews with several Freud subjects for the program "Sitting for Lucian Freud." In a review, The Times' Valerie Grove recounted:

To produce his pitiless portraits, which expose all and never flatter -- he is far more affectionate to dogs and horses -- Freud demands exacting commitment from his sitters.

They tell of long hours (often sprawled in some discomfort and indignity) at Freud’s autocratic bidding, of his feeding them woodcock, snipe and champagne; of how they often fall asleep while he works, and of his “singing and dancing” to entertain a grandchild. One daughter, Isobel Boyt, is asked why she sat a second time, having vowed “never again.” “I guess it’s a way of having a relationship with my dad,” she says. His sitters seem almost hypnotized. “He has done what he wanted throughout his life, and good luck to him,” says Sue Tilley.

You can hear a 2008 BBC interview with Tilley -- the subject of Freud's famous "Benefits Supervisor Sleeping" painting -- here:

"Benefits Supervisor Sleeping" was auctioned for $33.6 million -- a record price for a painting by a living artist -- in 2008.

Finally, here's the painter in his studio.