Time to build a better mousetrap?

In a neat Darwinist twist, European house mice are becoming resistant to the poison used to kill them 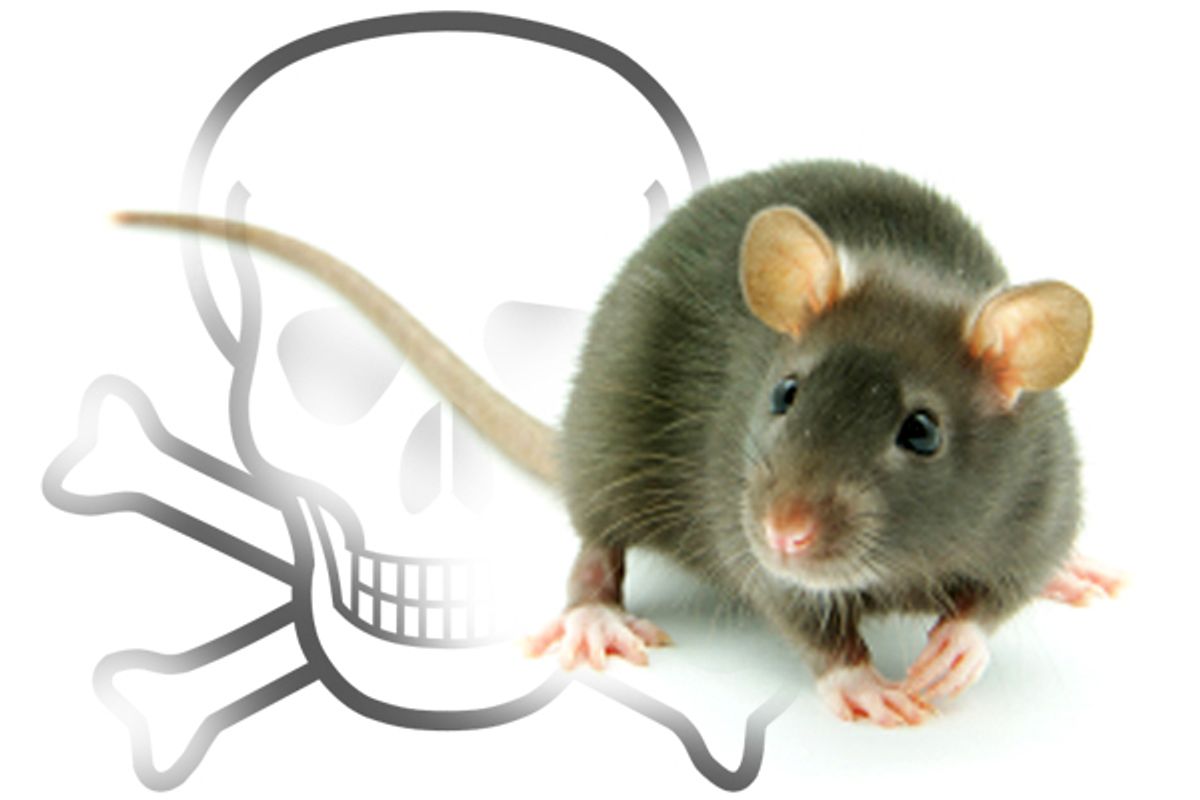 Mice with a new genetic mutation have muted the impact of once-deadly pesticides.
--

Scientists have long worried over bacteria becoming resistant to the poisons we use to destroy them. And we see evidence of the phenomenon all the time. Unremarkable, garden-variety pathogens -- deathly allergic to the best antibiotics medicine can produce -- flick a genetic switch, swapping DNA with unrelated microbes, and evolve into drug-resistant super bugs.

But that's just bacteria. Sure, it's scary, but it's also kind of abstract, and a little difficult to get excited about. What if we told you the same exact thing is happening now in mice?

Researchers at Rice University have completed a study of house mice in Germany and Spain, which, in recent years, have shown remarkable resilience to a pesticide called warfarin, commonly used to kill the rodents. What they found, through a comparison of genetic compositions, was evidence that populations of these European mice have been mating with members of a closely related species from Algeria.

According to the International Business Times:

[The] research team found that a large majority of the German mice's DNA was identical to Mus spretu, an Algerian mouse that has evolved over many years. Similar in features to a common house mouse, the Algerian mouse had previously gone through point mutation ... [which] arose to combat a Vitamin K deficiency, since Algerian mice typically only consume seeds.

The poison in question, warfarin, disables a protein responsible for vitamin-K production called "vkorc1." This thins an exposed mouse's blood, and ultimately leads to death. But the genetic mutation, which European mice inherited from their Algerian mates, renders "vkorc1" resistant to the effects of warfarin.

While this sort of interbreeding -- between different species of closely related animals -- can bequeath certain benefits, it often leaves the progeny sterile. (Mules, a mix of horse and donkey, are a famous example of this biological Catch-22.) But the mice in question have managed to find a loophole, enjoying the benefits of genetic mutation, without the downside of infertility.

"Sometimes there is the occasional odd hybrid that has just about the right novel combination of genomes from two species that renders them, at least temporarily, superior over the pure species," said Michael Kohn, one of the Rice researchers, to Discover News.

"This is a freaky mouse," he added.

Here's the really unsettling part: Algerian and European mice presumably crossed paths in the first place by hitching rides with commercial traders. What's to say they won't do it again? What with their unique resistance to a common pesticide, the European super mouse could "spread across the globe," notes the IB Times.

So, in short, maybe it's time to break out your mousetraps.