The shift in sentiment among refugees could further erode Assad's legitimacy 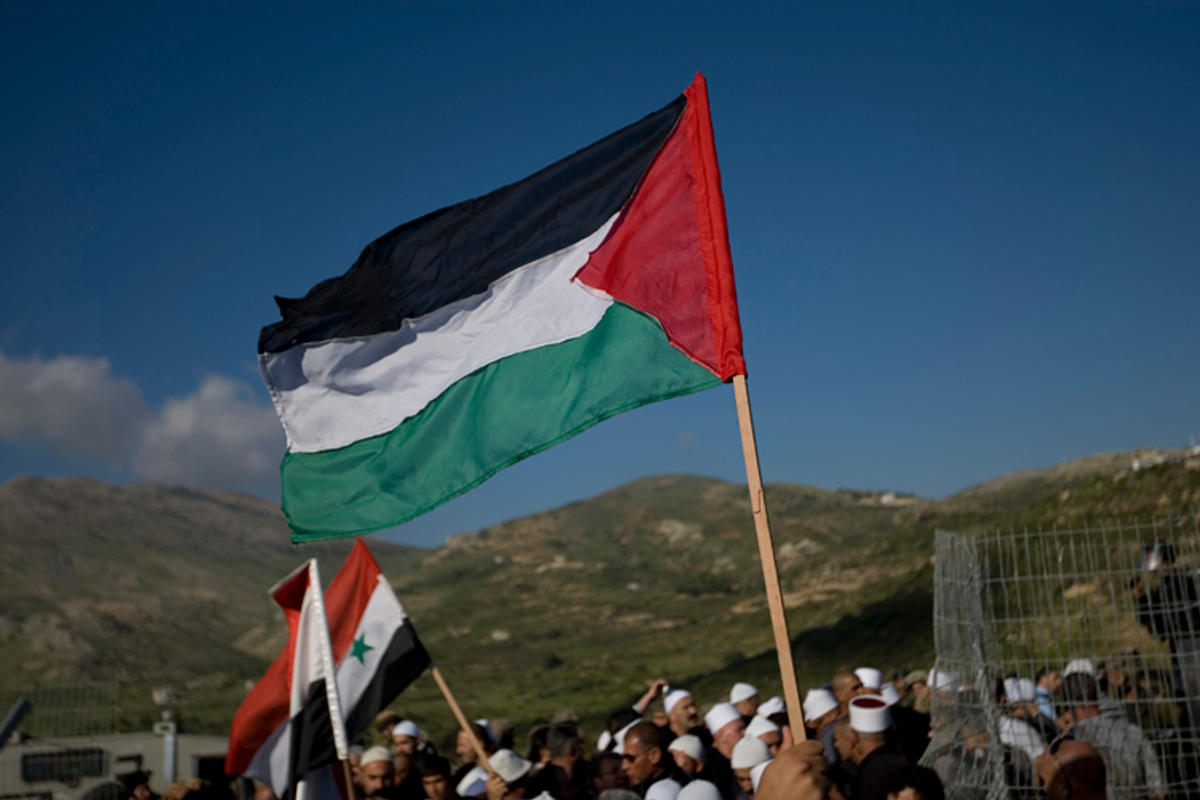 Druze men wave Palestinians and Syrian flags as they stand near the border fence between Israel and Syria on May 15, 2011
--

BEIRUT, Lebanon -- While stripped of their nationality in Jordan and living in Lebanon in the worst socio-economic conditions of any in their community, Palestinian refugees in Syria have long enjoyed comparably better circumstances, including equal rights with citizens.

But in a development that challenges a central pillar of the Syrian regime's legitimacy, Palestinians in Syria are beginning to turn against a dictatorship that for decades used its claims of resisting Israel and fighting for Palestinian rights as justification for the repression of its own people.

"The regime wants to use us against the pro-democracy protesters but I think most Palestinian refugees in Yarmouk now moved from being neutral to being on the side of the Syrian protesters," he said. Ammar is a former militant in Fatah, the dominant secular Palestinian party, and is now a car mechanic in Yarmouk.

The camp is home to some 150,000 registered Palestinians, as well as tens of thousands of Syrians.

As Syrian protesters demanding basic rights continue to be gunned down by President Bashar al-Assad's security forces, Syria's Palestinians are beginning to stand up like citizens themselves, protesting against the ruthless violence of Assad's government.

"Palestinian refugees in Syria live among Syrians, not like in Lebanon. For six decades we have lived together and there are many mixed marriages and a new, mixed generation," said a political activist from the Democratic Front for the Liberation of Palestine (DFLP).

"When the protesters call on us to participate, it shows they consider us partners, not strangers. We have the same rights as Syrians, so we also have the same responsibilities."

On July 1, in the first reported mass participation of Palestinians in the opposition since the uprising began in mid-March, more than 3,000 Palestinians from the refugee camp in the central city of Homs joined the pro-democracy protests.

More than simply a boost to the size of the protests that Friday, the participation of the Palestinians, for some long-time Syria watchers, represented a seismic shift.

"Dictators have used the Palestinians for the last 50 years to get legitimacy, saying to their people, ‘You have to tolerate all this violence, all this lack of freedom, all this brutality because we're going to liberate Palestine.' That's a lie," said Wissam Tarif, director of Insan, a Syrian human rights organization.

"My father bought it. And the fathers and grandfathers of the people protesting on the streets bought it too. But we don't."

Anger is growing among the half a million Palestinians living in Syria as details emerge of the regime's role in pushing Palestinian protesters into a deadly confrontation with Israel last month, in what was widely condemned as a move to divert attention from its own brutal crackdown.

On June 5, the 44th anniversary of Israel's occupation of Syria's southern Golan Heights, the PFLP-GC, a faction long allied with the regime, helped organize hundreds of Palestinians from Yarmouk to travel to the Golan Heights.

The fertile plateau is one of Israel's most stable borders, with barely a shot fired since the end of 1973's Yom Kippur or October War.

The regime regularly justified its near half century application of emergency law, which suspended many basic rights outlined in the Constitution, by the fact that the Golan remains occupied.

When Palestinians attempted to cross the border fence, 20 were shot dead and some 270 others wounded by Israeli soldiers, the second such incident within a month, prompting global headlines. The shootings were all filmed live by state-run Syria TV.

Never before had the regime allowed Palestinians, Syrians or any Arabs to attempt to cross its border with Israel.

Indeed, Damascus has for decades pursued a policy of directing Arab resistance into neighboring Lebanon. In the 1970s, Syria played a role pushing Yasser Arafat's Fatah fighters into South Lebanon, where they launched attacks on Israel from an area that came to be known as "Fatahland."

During the Israeli occupation of South Lebanon beginning in 1982, Syria helped arm Hezbollah in its successful struggle to liberate South Lebanon, before assisting the Iranian-financed group to become the most powerful political and military force in Lebanon. The PFLP-GC, whose headquarters is in Damascus, maintains bases along the mountains of Lebanon's Bekaa Valley.

"All Palestinians know the PFLP-GC organized the trip to the Golan to help Syria," said Nidal Mahmoud, 30, an accountant from Yarmouk.

"In the graveyard I saw the corpses of Palestinians who died for nothing, just to divert attention away from Syria's crisis to the borders with Israel. The Palestinian groups do nothing useful for us; they work for Syria, Iran and other countries."

When PFLP-GC leader Ahmed Jibril, a former captain in the Syrian army, attempted to make a speech lambasting Israel at the funerals in Yarmouk, enraged mourners threw stones at him, accusing Jibril of manipulating the Palestinian cause to serve the Assad regime.

There is unconfirmed evidence that the carefully orchestrated move to allow Palestinian protesters to cross the border with Israel came from the highest ranks of the regime.

An allegedly leaked memo from the office of the Mayor of Quneitra, the closest Syrian town to the Golan border, describes how Assef Shawkat, President Assad's brother-in-law, the former chief of military intelligence and the current deputy head of the armed forces, ordered a military intelligence captain to assist protestors to cross the fence.

"Permission is hereby granted allowing approaching crowds to cross the cease fire line toward the occupied Majdal-Shamms [Golan Heights], and to further allow them to engage physically with each other in front of United Nations agents and offices. Furthermore, there is no objection if a few shots are fired in the air," the memo read.

The leaked document was supplied by Radwan Ziadeh, head of the Damascus Center for Human Rights and a visiting scholar at Harvard University. While it could not be independently verified, Ziadeh has been a consistently reliable source of information on the Syrian uprising.

The U.S. deputy ambassador to the U.N., Rosemary DiCarlo, said the protest in the Golan represented "a transparent ploy by the Syrian government to incite violence along the disengagement line in order to divert public attention from its own indiscriminate killings and abuses of the human rights of the Syrian people."

That position was backed by similar robust statements from German and French U.N. ambassadors.

Despite the deaths in the Golan and Yarmouk, by no means all Palestinians have broken with the regime.

"Syria is the only country in the Arab world which deals with Palestinians as its citizens," said a pro-Syrian Palestinian activist close to the PFLP-GC, who asked to be known only as Ibrahim.

"Syria has been supporting Palestinian groups for more than four decades and now is the time for these groups to reward Syria and stand with it in this big crisis."

Ibrahim said the PFLP-GC and Fatah Intifada, a Syrian-backed radical offshoot of Fatah, would remain loyal to Assad. He criticized Hamas, the powerful Islamist group, for choosing to remain neutral in Syria. Hamas had apparently rejected demands by the regime, quoted in a report by the International Crisis Group, that it provide political and material support to crush the protests.

In an interview with France 24 on May 9, Khaled Meshaal, Hamas' Damascus-based leader, described the Arab Spring as "beautiful" and said freedom and democracy are needed in Syria.

The regime has further deepened animosity among Palestinians by seeking, in the early days of the uprising, to directly blame Palestinians for inciting the instability.

On March 21, the private daily Al Watan, owned by Assad's cousin Rami Makhlouf, said unrest in Daraa was the work of the defunct jihadist group Fatah al-Islam, which rose up in 2007 in a Palestinian camp in Lebanon.

On March 26, Bouthaina Shaaban, Assad's political advisor, claimed Palestinians from the Al-Ramel refugee camp outside the port city of Lattakia had attacked stores in an effort to ignite a civil war.

A Syrian official, quoted in the International Crisis Group report, put it more bluntly: "The regime can no longer claim to be standing up for resistance."

Hugh Macleod and Annasofie Flamand reported from Beirut, with reporters inside Syria.