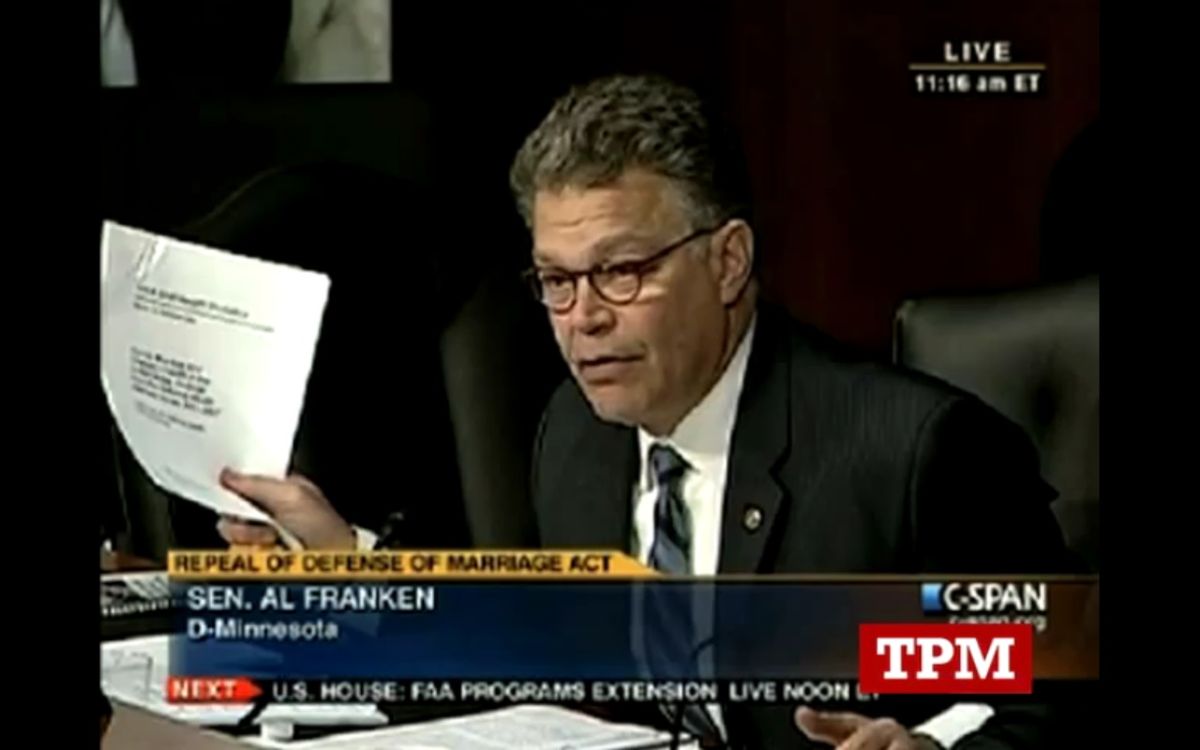 Sen. Al Franken (D-Minn) takes down a witness defending DOMA during a Senate hearing this week
--

The debt ceiling debate has utterly dominated national headlines for the last few weeks now, and with no resolution in sight, the saturation coverage is not likely to let up soon. Believe it or not, though, there are other things going on in politics and national affairs -- important things that haven't gotten nearly the attention they deserve. We thought we'd bring you up to speed on a few of them here:

[via the Huffington Post] -- A bill signed this week by Ohio Gov. John Kasich (R) bans abortions after 20 weeks if the fetus is determined to be viable. However, under Roe v. Wade, fetal viability occurs at 24 weeks at the earliest. Ohio is just the latest in a series of states to ban late-term abortions. Since last year, 20-week bans have been passed in Nebraska, Alabama, Idaho, Indiana, Kansas and Oklahoma -- none of which have so far been challenged in federal court. Ohio is also considering a more extreme bill that would ban all abortions after a fetal heartbeat can be detected, which can happen as early as six weeks into a pregnancy.

The Obama administration sets the record for number of deportations:

The Obama administration set a record last year for the number of illegal immigrants forced to leave the country. Huge increases in deportations came from people arrested for breaking traffic or immigration laws or drunk driving, which raises questions about the administration's claims that it is focusing on the most dangerous criminals living here illegally.

The AP reported Friday: "The U.S. deported nearly 393,000 people in the fiscal year that ended Sept. 30, half of whom were considered criminals. Of those, 27,635 had been arrested for drunken driving, more than double the 10,851 deported after drunken driving arrests in 2008."

The mass prisoner hunger strike that no one is talking about:

Over 400 California prisoners are entering the fourth week of a hunger strike in protest of what they describe as cruel and unusual conditions. The strike, which began at Pelican Bay prison near the Oregan border on July 1., has seen remarkably little national media coverage, despite at its peak spreading to 13 prisons and including 6,600 people.

The short list of prisoner demands includes more lenient treatment in isolation units and an end to "debriefings" -- lengthy interviews that prison officials use to determine inmates' gang member status.

A number of prisoners have gone on and off hunger strike in the past weeks, but almost 20 inmates started showing early signs of starvation this week. Despite reports that the strike ended Thursday at Pelican Bay, prison officials at other facilities relay that 500 inmates continue to refuse meals.

One of the reasons for the scant news coverage may be a ban imposed by prison officials on strikers meeting with the press. Authorities say this is for security reasons.

Real momentum for the end of DOMA:

The Senate Judiciary Committee this week held hearings on the "Respect for Marriage Act," which would repeal the "Defense of Marriage Act." DOMA was signed into law under President Clinton in 1996 after passing Congress with a strong majority. It defines "marriage" as a legal union between one man and one woman and holds that no state has to recognize a marriage between two people of the same sex that was performed in a different state or jurisdiction. DOMA's repeal would lead to federal recognition of any state's valid marriages, including same-sex marriages from states where they are legal.

The White House announced this week that President Obama supports the repeal act, and a Senate hearing on Wednesday showcased strong repeal arguments and a healthy dose of political theater. Notably, Judiciary committee member Al Franken (D-Minn.) eviscerated the testimony of a witness from the conservative Christian group Focus on the Family, who spoke in defense of DOMA. The video of Franken's take-down got some fast online traction:

Despite the hearing and White House support, repealing DOMA faces hurdles: Speaker John Boehner (R-Ohio) indicated on Thursday he wouldn’t allow a vote in the House on the Respect for Marriage Act.

A right-wing think tank may be behind an under-the-radar assault on the EPA's power:

[via TPM] -- A bill that would strip fundamental powers of the Environmental Protection Agency to regulate water toxins passed the House last week and "crept closer to a Senate vote," reported TPM.

The Clean Water Cooperative Federalism Act of 2011 "bears a striking resemblance to several pieces of "model legislation" recently leaked from The American Legislative Exchange Council (ALEC), and might be the newest testament to the organization's potency," TPM noted.

Under the bill, states would no longer be held to federal water quality standards. It would also stop the EPA from blocking new mountaintop removal coal mines in states like West Virginia, pollution from which has been recently linked to "significantly higher" rates of birth defects.

The Center for Media and Democracy last week revealed documents from ALEC, the Washington-based policy institute that brings Republican lawmakers together with lobbyists and right-wing activists to draft model legislation, that suggest the think tank may have inspired the legislation.

This bill is unlikely to pass the Senate and the White House has threatened to veto it in any case, but the episode is a sign of ALEC's growing clout on Capitol Hill.