Amy Winehouse is dead at 27 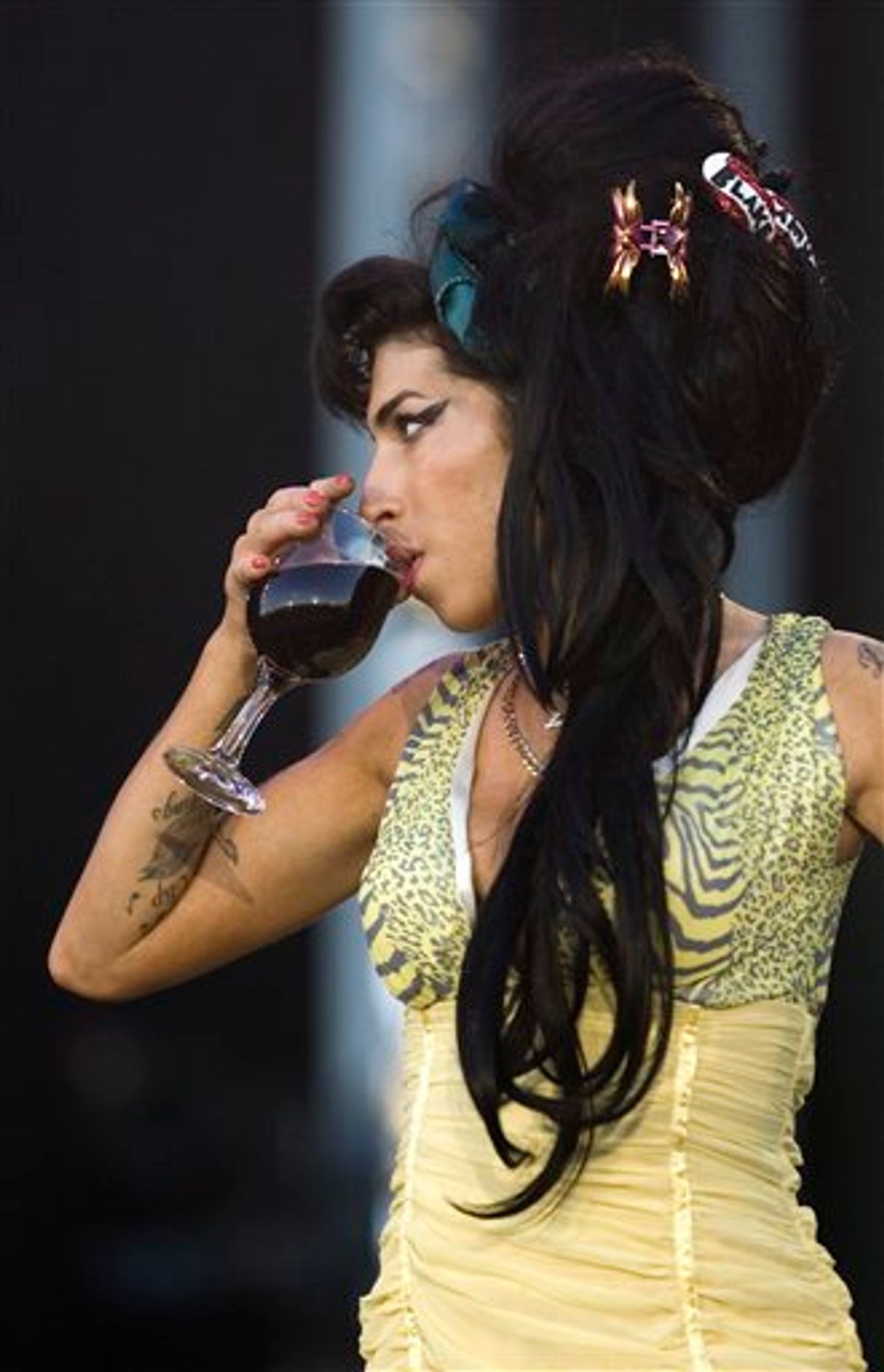 FILE - In this July 4, 2008 file photo, jazz soul singer Amy Winehouse, from England, performs during the Rock in Rio music festival in Arganda del Rey, on the outskirts of Madrid. Amy Winehouse was booed and jeered late Saturday, June 18, 2011 during a concert in Serbia's capital as she stumbled onto the stage, mumbled through her songs and wandered off. (AP Photo/Victor R. Caivano, File) EDITORIAL USE ONLY (AP)
--

Amy Winehouse, the beehived soul-jazz diva whose self-destructive habits overshadowed a distinctive musical talent, was found dead Saturday in her London home, police said. She was 27.

Winehouse shot to fame in 2006 with the album "Back to Black," whose blend of jazz, soul, rock and classic pop was a global hit. It won five Grammys and made Winehouse -- with her black beehive hairdo and old-fashioned sailor tattoos -- one of music's most recognizable stars. But her personal life, with its drug and alcohol abuse, eating disorders and destructive relationships, soon took over her career.

Police confirmed that a 27-year-old female was pronounced dead at the home in Camden Square northern London; the cause of death was not immediately known. London Ambulance Services said Winehouse had died before the two ambulance crews it sent arrived at the scene.

Singer and actress Kelly Osbourne, who helped Winehouse check into a drug addiction treatment facility in 2008, was one of many who grieved for the singer on Twitter.

"I cant even breath right now im crying so hard i just lost 1 of my best friends. i love you forever Amy and will never forget the real you!" she tweeted.

The singer's father, Mitch Winehouse, had arrived in New York this weekend to prepare for his U.S. performing debut Monday night at the Blue Note jazz club, but upon receiving news of his daughter's death was heading back home to London to be with his family, his publicist Don Lucoff said.

An ambulance could be seen parked beneath the trees outside her London home, and the whole street was cordoned off by police tape. Officers kept onlookers away from the scene.

Last month, Winehouse canceled her European comeback tour after she swayed and slurred her way through barely recognizable songs in her first show in the Serbian capital of Belgrade. Booed and jeered off stage, she flew home and her management said she would take time off to recover.

Winehouse was last publicly seen on at a London concert on Wednesday when she joined her goddaughter Dionne Bromfield on stage. In that impromptu appearance, Winehouse danced with Bromfield and encouraged the audience to buy her album, before leaving the stage.

"I didn't go out looking to be famous," Winehouse told the Associated Press when "Back to Black" was released. "I'm just a musician."

But in the end, the music was overshadowed by fame, and by Winehouse's demons. Tabloids lapped up the erratic stage appearances, drunken fights, stints in hospital and rehab clinics. Performances became shambling, stumbling train wrecks, watched around the world on the Internet.

Born in 1983 to Mitch Winehouse, taxi driver, and his pharmacist wife Janis, Winehouse grew up in the north London suburbs, and was set on a showbiz career from an early age. When she was 10, she and a friend formed a rap group, Sweet 'n' Sour -- Winehouse was Sour -- that she later described as "the little white Jewish Salt 'n' Pepa."

She attended the Sylvia Young Theatre School, a factory for British music and acting moppets, later went to the Brit School, a performing arts academy in the "Fame" mold, and was originally signed to "Pop Idol" svengali Simon Fuller's 19 Management.

But Winehouse was never a packaged teen star, and always resisted being pigeonholed.

Her jazz-influenced 2003 debut album, "Frank," was critically praised and sold well in Britain. It earned Winehouse an Ivor Novello songwriting award, two Brit nominations and a spot on the shortlist for the Mercury Music Prize.

But Winehouse soon expressed dissatisfaction with the disc, saying she was "only 80 percent behind" the album.

"Frank" was followed by a slump during which Winehouse broke up with her boyfriend, suffered a long period of writer's block and, she later said, smoked a lot of marijuana.

"I had writer's block for so long," she said in 2007. "And as a writer, your self-worth is literally based on the last thing you wrote. .. I used to think, 'What happened to me?'

"At one point it had been two years since the last record and (the record company) actually said to me, 'Do you even want to make another record?' I was like, 'I swear it's coming.' I said to them, 'Once I start writing I will write and write and write. But I just have to start it.'"

The album she eventually produced was a sensation.

Released in Britain in the fall of 2006, "Back to Black" brought Winehouse global fame. Working with producers Mark Ronson and Salaam Remi and soul-funk group the Dap-Kings, Winehouse fused soul, jazz, doo-wop and, above all, a love of the girl-groups of the early 1960s with lyrical tales of romantic obsession and emotional excess.

"Back to Black" was released in the United States in March 2007 and went on to win five Grammy awards, including song and record of the year for "Rehab."

"A lot of British bands fail in America because they give America something Americans do better -- that's why most British hip-hop has failed," he said. "But they won't have come across anything quite like Amy Winehouse."

She was famously blunt in her assessment of her peers, once describing Dido's sound as "background music -- the background to death" and saying of pop princess Kylie Minogue, "she's not an artist ... she's a pony."

The songs on "Black to Black" detailed breakups and breakdowns with a similar frankness. Lyrically, as in life, Winehouse wore her heart on her sleeve.

Even then, Winehouse's performances were sometimes shambolic, and she admitted she is "a terrible drunk." She acknowledged struggling with eating disorders and told a newspaper that she had been diagnosed as manic depressive but refused to take medication. Soon accounts of her erratic behavior, canceled concerts and drink- and drug-fueled nights began to multiply.

Photographs caught her unsteady on her feet or vacant-eyed, and she appeared unhealthily thin, with scabs on her face and marks on her arms.

There were embarrassing videos released to the world on the Internet. One showed an addled Winehouse and Babyshambles singer Pete Doherty playing with newborn mice. Another, for which Winehouse apologized, showed her singing a racist ditty to the tune of a children's song.

Winehouse's managers went to increasingly desperate lengths to keep the wayward star on the straight and narrow. Before the June concert in Belgrade, her hotel was stripped of booze. It did no good, and the concert was painful to watch.

Though she was often reported to be working on new material, fans got tired of waiting for the much-promised followup to "Back to Black."

Occasional bits of recording saw the light of day. Her rendition of The Zutons' "Valerie" was a highlight of producer Mark Ronson's 2007 album "Version," and she recorded the pop classic "It's My Party" for the 2010 Quincy Jones album "Q: Soul Bossa Nostra."

But other recording projects with Ronson, one of the architects of the success of "Back to Black," came to nothing.

She also had run-ins with the law. In April 2008, Winehouse was cautioned by police for assault after she slapped a man during a raucous night out.

The same year she was investigated by police, although not charged, after a tabloid newspaper published a video that appeared to show her smoking crack cocaine.

In 2010, Winehouse pleaded guilty to assaulting a theater manager who asked her to leave a family Christmas show because she'd had too much to drink. She was given a fine and a warning to stay out of trouble by a judge who praised her for trying to clean up her act.

In May 2007 in Miami, she married music industry hanger-on Blake Fielder-Civil, but the honeymoon was brief. That November, Fielder-Civil was arrested for an attack on a pub manager the year before. Fielder-Civil later pleaded guilty to assaulting barman James King and then offering him 200,000 pounds (US$400,000) to keep quiet about it.

Winehouse stood by "my Blake" throughout his trial, often blowing kisses at him from the court's public gallery and wearing a heart-shaped pin labeled "Blake" in her hair at concerts. But British newspapers reported extramarital affairs while Fielder-Civil was behind bars.

Winehouse's health often appeared fragile. In June 2008 and again in April 2010, she was taken to hospital and treated for injuries after fainting and falling at home.

Her father said she had developed the lung disease emphysema from smoking cigarettes and crack, although her spokeswoman later said Winehouse only had "early signs of what could lead to emphysema."

She left the hospital to perform at Nelson Mandela's 90th birthday concert in Hyde Park in June 2008, and at the Glastonbury festival the next day, where she received a rousing reception but scuffled with a member of the crowd. Then it was back to a London clinic for treatment, continuing the cycle of music, excess and recuperation that marked her career.