The 27-year-old's addictions took her life, but gave her credibility music fans crave 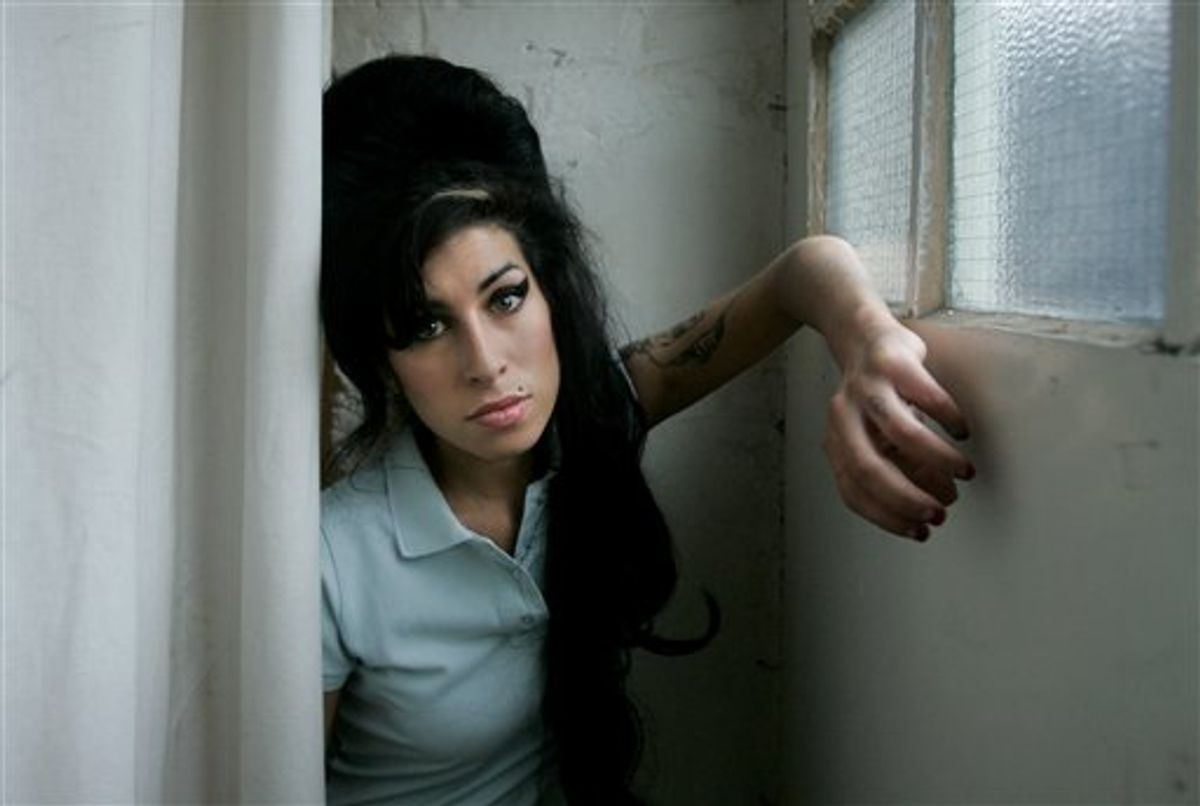 Amy Winehouse’s darkest days were well-documented, and the tone of the coverage -- you could practically hear the cackling -- was often troublingly flip. Such, of course, is tabloid culture; we are all jackals now.

The rate at which the public gobbled up glib Winehouse headlines (Amy Winehouse Performs Drunk and Falls On Stage! Drunk Amy Winehouse Gives Worst Performance In History!) was in line with both the extraordinary number of records she sold and the precise content of those records. "I cheated myself, like I knew I would / I told you I was trouble, you know that I'm no good," Winehouse sang, salty and teasing, outing herself -- gallantly, even -- as a devotee of excess. "They tried to make me go to rehab, I said 'No, no, no,'" she proudly insisted. Her voice was tough, unapologetic.

Offstage, we watched her stumbling around London in a bedraggled beehive and a pair of dirty ballet flats, buying bags of potato chips, her tiny shorts barely supported by her toothpick-thin frame, bloodied and hollering at reporters. It was impossible not to draw easy parallels between Winehouse’s art and her apparently tumultuous life. And while her fans ostensibly blanched at her mistakes, there’s little question that we also let it validate her work: Hey, she means it. She really means it.

It’s a refrain that’s followed the too-soon deaths of a slew of other singers, most notably Kurt Cobain, who, also at 27, pressed a shotgun to his face and fired, lending an eerie air of prescience to Nirvana’s anxious discography. It you didn’t believe him before, you believed him now.

Critics continue to insist that authenticity, as it applies to art (and especially performance), is a sucker’s bet -- it’s a hollow construct, an impossible ideal, a dangerous, nonsensical presumption. Everything is authentic; nothing is authentic. Besides, what matters -- at least theoretically -- isn’t the authenticity of the rendering, it’s the authenticity of the response. If a late-era Britney Spears track makes a listener sob (or dance like crazy), it’s irrelevant whether or not Spears was cogent, or "meant it," or even participated in its creation. The song is the thing.

Art, unfortunately, doesn’t always function that way -- there is no vacuum. Authenticity does matter to fans, even when they’re smart enough to know better, and especially when it’s difficult to pinpoint why. We want to see real blood in exchange for our devotion, every time. The human reaction to music can be so crippling -- who hasn’t accidentally started whimpering in a drugstore, huddled and vulnerable by the cough drops, when a sappy ballad seeps out of the overhead speakers? -- that we need to believe the artist in question, the instigator, felt that pain, too. It becomes a question of solidarity, and to crack that trust -- to fake it -- feels like a smirking betrayal. And we feel stupid for believing so deeply.

Authenticity was an especially dicey thing for Amy Winehouse. Already, she was working within idioms (black American soul, R&B, hip-hop and jazz, with a bit of blues thrown in) that plenty of people feel proprietary about. The story of those genres is often told via hardship: Who could possibly be more qualified to sing the blues, after all, than a black man in Mississippi in 1929? Authenticity can be a distracting and belittling narrative -- it takes an awful lot more than anguish to be a good blues performer -- but our understanding of these traditions is shaped by context. When a supposed outsider tries to appropriate one, it can read, however stupidly, as hubris. On her gutsy 2007 breakthrough "Back to Black," Winehouse was accompanied by the Dap-Kings, the Daptone Records house band, which typically backs up the powerhouse soul singer Sharon Jones. As a young, white, British woman, Winehouse’s cultural "claim" to this music was dubious -- until her personal troubles came into public focus. Addiction is a fundamentally different kind of hardship, but Winehouse’s life wasn’t charmed. She had credibility, suddenly, and that trumped everything else -- race, circumstance, origin. She made dozens of unforgivable professional and personal mistakes, but no one could accuse her of being full of shit.

At some point, pop songwriting became nonfiction by default, and even when an artist decries a song’s personal relevancy, we still hear it as autobiography. Musicians like Paul Westerberg and Lucinda Williams have spoken about the burden of living up to a persona, self-ascribed or otherwise -- of having to embody a character in a song, or inhabit a version of themselves that no longer exists. Raw, boozy, untethered performances are heralded as real; the abstemious professional is yawned off the stage. Good art, the culture insists, comes from a place of pain, and if a singer cleans up, gets married, or finds God, we threaten to stop believing.

That Amy Winehouse never had the chance to betray her music is the saddest kind of epilogue.

Amanda Petrusich is the author of "It Still Moves: Lost Songs, Lost Highways, and the Search for the Next American Music."