Writing the singer off as another celebrity junkie ignores the bigger issue: The failure of the War on Drugs 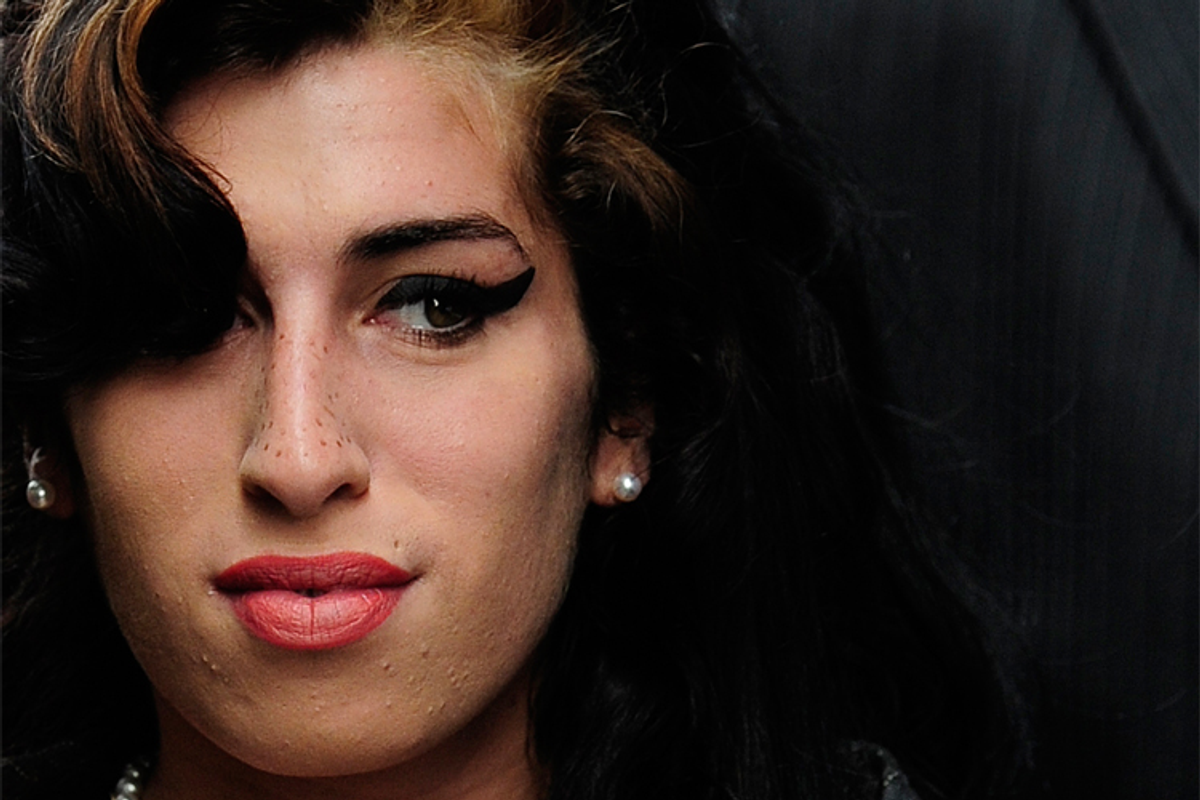 As the news filtered across the social media sphere about the death of singer Amy Winehouse, I found myself strangely saddened by this loss. After all, wasn't this just another celebrity whose life had run amok in a very predictable fashion? But aside from the odd (and perhaps intentional?) fact that she died in her 27th year like so many other famous rock stars of the "27 Club" (including Kurt Cobain, Janis Joplin, Jimi Hendrix, Jim Morrison and Brian Jones), something about Amy's tragic exodus from life struck me in a distinctive way.

Even without knowing the exact cause of death, there really is very little doubt as to what ended the life of the diva most famous for refusing to go to rehab. I'm sure my first impression of "Well I saw that one coming" upon hearing the news was hardly unique.

Winehouse had attended rehab on at least three occasions even though her bluesy, instant hit "Rehab" emphatically stated, "No, no, no." Multiple incidences of staggering intoxication during performances and well-publicized events of drug-induced insanity made it clear this woman was having serious trouble with substances.

What really struck me about this death, following so closely on a horrific scene of mass slaughter in Norway, was how many people opined that we should ignore Winehouse and focus instead on "real" world events: Norway, Libya, Afghanistan, Somalia and our own tens of thousands who die from lack of healthcare at home. After all, what's the death of yet another junkie celebrity when compared to these horrors?

The answer is, of course, there is no comparison. While every needless death is tragic, we can still manage to look at all of these terrible happenings in their own light and realize that acknowledging one does not diminish any of the others. In the case of Winehouse, aside from the fact that we all suffer in an important way when an amazing talent is taken so early, my hope is that her death will help us recognize how the "war on drugs" has left far more casualties than successes.

Since drug abuse in the U.S. alone is purported to cause 19,000 deaths a year, it is clear that this is not a problem we should be ignoring. By outlawing these substances, we have only succeeded in turning huge portions of the population into criminals. Over a million people are incarcerated for drugs in this country every year -- the vast majority of whom are people of color.

All the while it's obvious that the criminalization of drugs does practically nothing to stem the negative outcomes addiction brings. It certainly didn't keep Winehouse away despite her own run-ins with the law. Instead, black market drug money floods into cartels, which have murdered tens of thousands and laid waste to countries across the globe, from Mexico to Afghanistan. As we learned the hard way during the disastrous period of the 18th Amendment in this country, prohibition not only doesn't work, it fosters a criminal underclass of sociopaths who prey on the weak while reaping obscene profits.

As Winehouse was also an alcoholic, it's important to note the role of alcohol too. Abuse of booze is reported to claim nearly 35,000 U.S. lives annually with an additional 40,000 killed in car crashes alone. The costs to productivity, healthcare and society are enormous.

One might ask why I'd advocate for legalizing drugs when we have such horrendous results with our perfectly legal alcohol, so I'll explain the difference.

First of all, alcohol is advertised freely and constantly. The alcohol industry spends over a billion dollars a year on getting the message out to use its products. Per the site U.S.NoDrugs.com:

Each year the typical young person in the United States is inundated with more than 1,000 commercials for beer and wine coolers in addition to several thousand fictional drinking incidents on television

Obviously this depiction of liquor as safe, fun and sexy has an enormous effect on how much the substance is used and abused, much as the unfettered advertising of cigarettes encouraged smoking back in the day. It's time for public perceptions to change concerning alcohol and its potential for abuse. The best way is for advertising to be curtailed and education about the consequences of misuse stepped up.

It's also important to point out that no one is advocating that recreational drugs be advertised. Responsible legalization efforts are clear in their message that drugs should be legal but also taxed and regulated, preferably available in pharmacy-type settings with advertising of any kind forbidden. This makes sense.

The argument that a legal source of drugs will make procurement easier is simply false. I have yet to meet a single drug user who had any trouble whatsoever obtaining his or her product. It's out there and readily available. The sad fact is that along with the immense violence engendered by the trade, users also suffer great harm from unregulated products that vary widely in potency and are often laced with dangerous substances.

Most important, we must ramp up our education and rehabilitation networks to have any kind of success in curbing this incredible waste of human lives. If we took the costs we plow into the drug war and directed even a small fraction of it into prevention and treatment, we'd not only save thousands of lives, we'd even help our deficit situation. One estimate is that legalizing drugs could inject $76.8 billion a year into the U.S. economy, with $44.1 billion from law enforcement savings, and at least $32.7 billion in tax revenue. This doesn't even take into account the savings in healthcare costs and productivity from drug-related disease and disability. Ten years after Portugal decriminalized drugs, the nation, which once had one of the worst records for drug abuse in Europe, cut usage in half -- and saw a huge drop in drug-related crimes. One can only hope that the rest of the world will finally wake up and take notice.

Amy Winehouse obviously was a tortured soul who repeatedly failed in her attempts to get clean. It's a sad fact that even under the best of circumstances not everyone survives their drug and alcohol addiction. She also had an amazing talent that we don't see every day, which makes her death a great loss for the arts. The skinny white chick with the amazing gutsy voice moved thousands, and she is credited with helping launch other unusually creative women artists such as Lady Gaga into the realm of musical success. At the same time, her insane behavior while under the influence both riveted and repelled. But in the end she simply became yet another poster child for just how devastating an unchecked spiral into addiction can be. Perhaps we can take note of this and move toward changes that can save lives and relieve suffering for millions.

While watching this informal and soulful recording of her singing "Valerie" I was moved by an alternative picture of Amy. Here, instead of the defiant and belligerent rock star, we see a vulnerable and even fragile human being who sadly got caught up in a disease that was simply a lot bigger than she was.

So rest in peace, Amy Winehouse. Your battle with your demons is at an end and all we're left with is the music.

But oh what music it is.