What we know about the Norway shooter

The world has learned some shocking details about Anders Behring Breivik, accused of killing over 70 on Friday 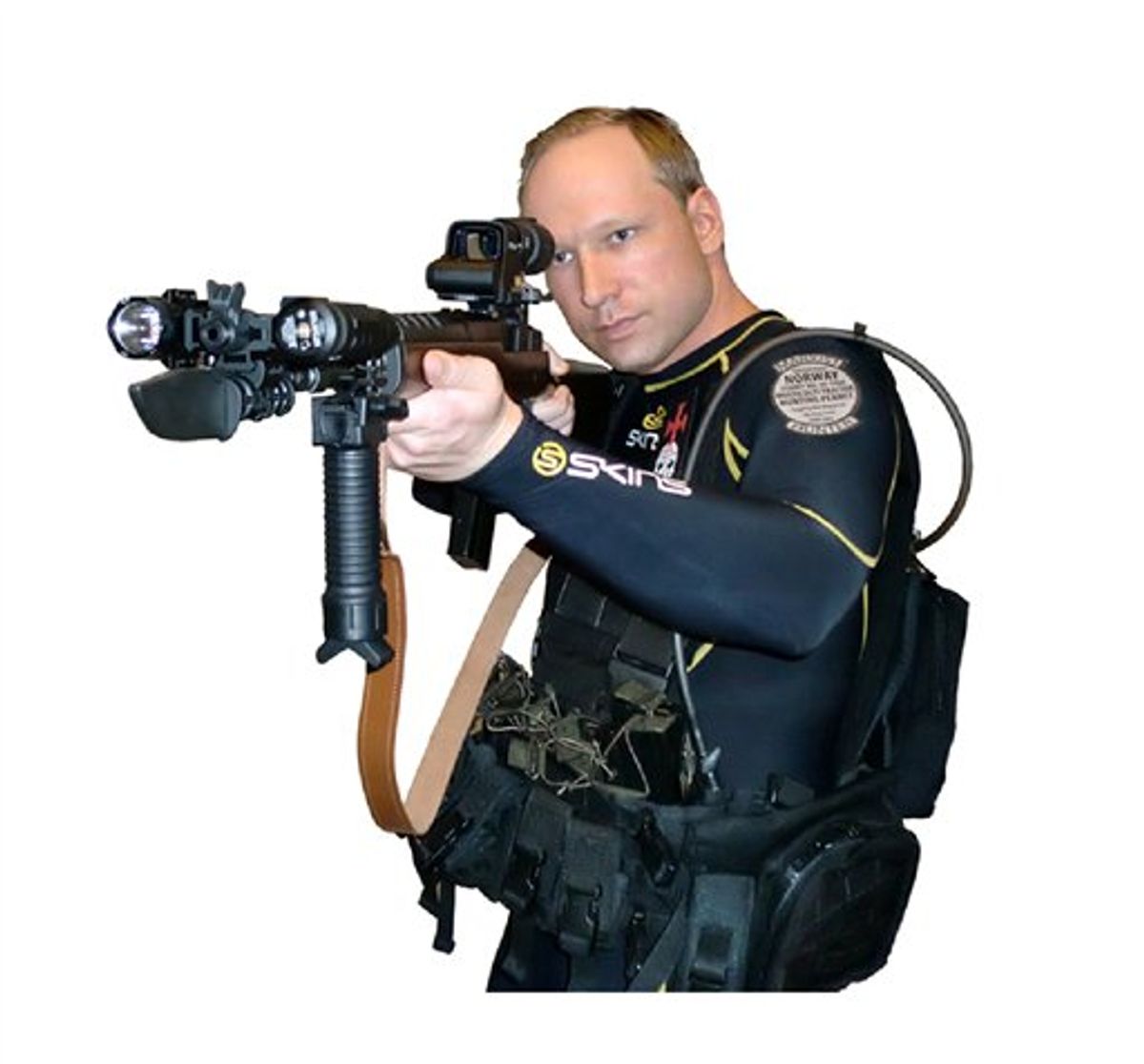 An image of Anders Behring Breivik from a manifesto attributed to him that was discovered Saturday, July 23, 2011. (AP Photo/via Scanpix)
--

The world was stunned Friday by a double tragedy in Norway: An explosion in the nation's capital, Oslo, left seven dead, while a shooting spree on the nearby island of Utoya reportedly claimed the lives of 86, mainly teenagers from a Labor Party youth camp. Though many at first suspected the involvement of international terrorism, both acts of violence have now since been pegged to a 32-year-old Norwegian man named Anders Behring Breivik. Breivik has confessed to orchestrating both attacks, and says he acted alone. (Though he made further statements in a  court hearing today -- where he pleaded not guilty -- that have stoked fears about two more possible terror cells in the country.) Breivik has called his actions "atrocious," but also "necessary."

The facts we've learned about Breivik in the days since the massacre paint a portrait of a disturbed and isolated man. Unearthed documents have shown that Breivik -- the son of a retired Norwegian diplomat -- was fiercely xenophobic, railing against Muslims, women, and cultural and political "leftists." Indeed, ABC News notes that, after his arrest, he told Norway's acting national police chief that he "wanted to attack Norwegian society in order to change it" and that "he wanted to transform the Western world." He also called for a "conservative revolution [... and] armed resistance against the cultural Marxists/multiculturalist regimes of Western Europe."

Per the Wall Street Journal:

In bombing those government buildings and hunting down those campers, Breivik was not taking out people randomly. He considered the Labor Party, Norway's dominant party since World War II, responsible for policies that are leading to the Islamization of Europe—and thus guilty of treason.

The Oslo bombing was intended to be an execution of the party's current leaders. The massacre at the camp—where young would-be politicians gathered to hear speeches by Prime Minister Jens Stoltenberg and former Prime Minister Gro Harlem Brundtland—was meant to destroy its next generation of leaders.

Breivik has left extensive documentation of his anger toward multiculturalism and his violent impetus for radical social change. In particular, a number of outlets have picked up on the fact that the man labeled himself a "modern-day Templar Knight," and a "Christian crusader." In a YouTube video that showed several pictures of Breivik (including one where he was staring down the cross hairs of an automatic weapon), he apparently wrote this suggestive caption (per the Huffington Post): "Before we can start our crusade we must do our duty by decimating cultural marxism." The video has been removed from YouTube since the attacks.

The most shocking testament to Breivik's twisted worldview, however, is a 1,500 page document that he titled "2083: A European Declaration of Independence," and that reveals Breivik's infatuation with American cultural conflicts. (At one point, he lambasted American liberals' "War on Christmas.") Its sections allegedly included the following: "What your government, the academia and the media are hiding from you," "Documenting EU's deliberate strategy to Islamize Europe" and "How the feminists' 'War Against the Boys' paved the way for Islam." The man cited a number of American, Canadian and English writers in his manifesto -- including Robert Spencer, who runs the website Jihad Watch Web, on 64 occasions, the New York Times points out.

He was also inspired by one of America's most notorious domestic terrorists: Theodore Kaczynski, the Unabomber. Breivik lifted passages straight from Kaczynski's manifesto for his own declaration, according to Norwegian website Document.no.

Per the Los Angeles Times:

The website editor noted that the alleged gunman replicated passages 6 through 23 of the Unabomber's manifesto, but made some slight changes.

For example, Breivik replaced the word "leftist" with "cultural Marxist;" while "leftism" was replaced with "Multiculturalism" and "cultural Communism," according to Rustad.

Rarely has the connection between sexual anxiety and right-wing nationalism been made quite so clear. Indeed, Breivik's hatred of women rivals his hatred of Islam, and is intimately linked to it. Some reports have suggested that during his rampage on Utoya, he targeted the most beautiful girl first. This was about sex even more than religion.

Goldberg also points to statements Breivik has made complaining about the influence of his diplomat stepmother, whom he faults with instituting a "super-liberal, matriarchal upbringing, [that] contributed to feminise me to a certain degree." Likewise, he wrote, "The female manipulation of males has been institutionalised during the last decades and is a partial cause of the feminisation of men in women."

Breivik's actions will undoubtedly cast new attention toward a growing body of fiercely nationalist, and sometimes violent, right-wing movements across Europe. Until now, police had downplayed the threat of such groups, but from here on out, they'll likely be facing considerably more scrutiny.

UPDATE: Police have revised down the death toll from both attacks to 76. They now believe 68 people were killed in the shooting on Utoya, in addition to eight dead in the Oslo explosion.

UPDATE II: As the hours pass, enterprising individuals continue to parse through Breivik's massive online "manifesto," helping to fill in the details of the man's life and his twisted motivations.

Literature, reading, and writing sit at the heart of Breivik’s crime. During his years building his bomb and laying the plans for his attack, he was also working on his book, which is not simply his book, but a body of literature he wished to bring to wider attention through violent publicity stunts. Like the Unabomber, he fancies himself a writer-prophet, but he is much more community-minded than Ted Kaczynski.[...]Kaczynski’s manifesto adopts the revolutionary “we,” but it has a lonely feeling. Breivik’s, on the other hand, is a boisterous affair, a clip-job compendium for the digital age, cut and paste with relish and speed from communal blogs around the Internet and intended, as Breivik writes in the introduction, for his seven thousand Facebook friends.

As the Christian Science Monitor notes, Breivik was indeed aiming to start a violent anti-Muslim revolution the world over:

Mr. Breivik’s primary goal is to remove Muslims from Europe. But his manifesto invites the possibility for cooperation with Jewish groups in Israel, Buddhists inChina, and Hindu nationalist groups in India to contain Islam.

Meanwhile, Mark Juergensmeyer at Religion Dispatches seems to have isolated the motivation for the title of Breivik's dissertation, "2086," consistent with his seeming fixation on a global "anti-jihad":

I found the answer on page 242 of Breivik’s manifesto, where he explains that on 1683 at the Battle of Vienna, the Ottoman Empire’s military was defeated in a protracted struggle, thereby insuring that most of Europe would not become part of the Muslim empire. The date in Breivik’s title is the 400th anniversary of that decisive battle, and in Breivik’s mind he was re-creating the historic efforts to save Europe from what he imagined to be the evils of Islam.

In hoping to issue an early assessment of Breivik's place in history, the Guadian's Henning Mankell drives parallels to the Third Reich: "This is a ghastly return of Übermench mentality that was the mark of Hitler's Nazism. An idyllic country is once again exposed to the banality of evil." He goes on to tidily summarize those many personality details we've learned about Breivik since Friday:

[Breivik] is torn apart by an inner rage. He is opposed to Muslims. He is opposed to different types of people meeting in a multicultural society. He detests the ambitions of globalism and is willing to attack the very idea of the modern age. He is a cold-blooded Don Quixote tilting at people who live and breathe.

[...]Perhaps he imagines that, in time, he will become the hero that "saved" Norway. Or perhaps he will be satisfied with being inducted into the hall of fame of human monsters.