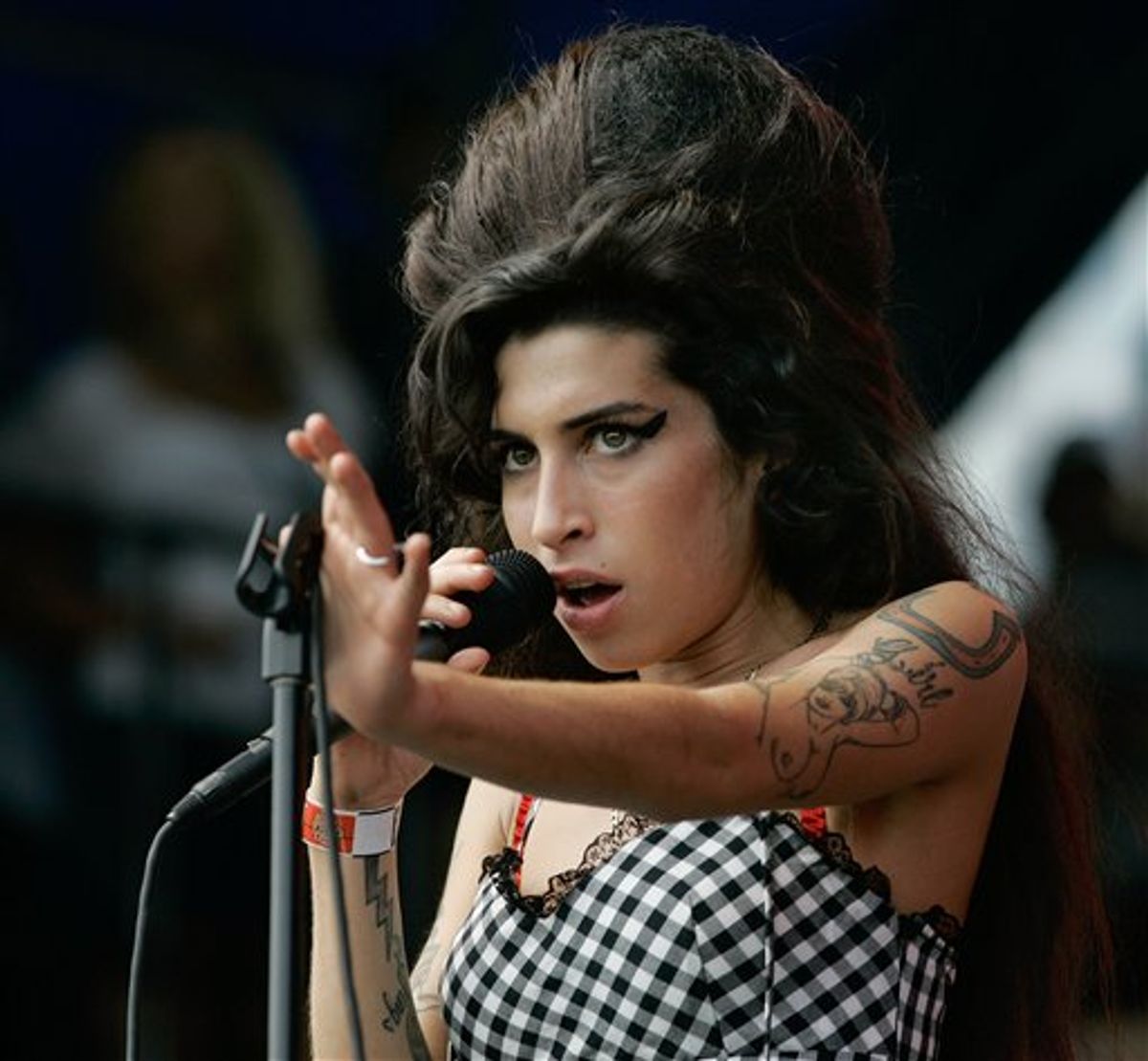 FILE - In this Aug. 5, 2007 file photo, British singer Amy Winehouse performs at Lollapalooza at Grant Park in Chicago. The singer was found dead Saturday, July 23, 2011, by ambulance crews who were called to her home in north London's Camden area. She was 27. (AP Photo/Brian Kersey, File) (AP)
--

An autopsy on singer Amy Winehouse Monday failed to determine what killed the 27-year-old star, leaving fans and family with a weeks-long wait for the results of toxicology tests.

Winehouse's devastated parents visited mourners outside her north London home to thank them for their support, ahead of a private family funeral that could be held as early as Tuesday.

The singer, who had struggled with drug and alcohol abuse for years, was found dead Saturday at home by a member of her security team, who called an ambulance. It arrived too late to save her.

The Metropolitan Police said Monday that a forensic post mortem "did not establish a formal cause of death and we await the results of further toxicology tests." Those are expected to take two to four weeks.

An inquest into the singer's death was opened and adjourned at London's St. Pancras Coroner's Court. During the two-minute hearing, an official read out the name, birth date and address of Winehouse, described as "a divorced lady living at Camden Square NW1."

"She was a singer songwriter at the time of her death and was identified by her family here at St. Pancras this morning," said coroner's officer Sharon Duff.

Duff said the scene of Winehouse's death "was investigated by police and determined non-suspicious."

In Britain, inquests are held to establish the facts whenever someone dies violently or in unexplained circumstances. Assistant Deputy Coroner Suzanne Greenaway said Winehouse's inquest would resume on Oct. 26.

The singer's father, mother and brother visited her home on Monday, stopping to inspect the mounds of bouquets, candles and handwritten notes across the road from the Victorian house.

Her father, Mitch Winehouse, thanked mourners for their tributes.

"I can't tell you what this means to us -- it really is making this a lot easier for us," he said.

"We're devastated and I'm speechless but thanks for coming."

The singer's mother, Janis, was in tears as she examined the flowers, candles, vodka bottles, flags, drawings and handwritten cards left by neighbors, fans and well-wishers. Many of the offerings expressed the same sentiment: "What a waste."

"I'll remember her as a troubled soul," said fan Ethna Rouse, who brought her 4-year-old son to leave a bouquet. "Like many artists in the world -- they are tortured souls, and that's where the talent comes from."

The singer had battled her demons in public, too often making headlines for erratic behavior, destructive relationships and abortive performances.

But she was remembered fondly by her neighbors in Camden, the creative but gritty neighborhood where she lived on and off for years.

"She was too young to die and too talented, and too beautiful," said Peggy Conlon, landlady of the Dublin Castle pub, where Winehouse occasionally stopped for a drink. "She's sorely missed by everyone, not one person had a bad word to say about that kid."

Last month, Winehouse canceled her European comeback tour after she swayed and slurred her way through barely recognizable songs in her first show in the Serbian capital, Belgrade. Booed and jeered off stage, she flew home and her management said she would take time off to recover.

Her last public appearance came three days before her death, when she briefly joined her goddaughter, singer Dionne Bromfield, on stage at The Roundhouse in Camden, near her home.

Actor Russell Brand, a former drug addict, wrote a lengthy tribute in which he urged the media and public to change the way addiction is perceived -- "not as a crime or a romantic affectation but as a disease that will kill."

"Winehouse and I shared an affliction, the disease of addiction," he wrote. "Addiction is a serious disease; it will end with jail, mental institutions or death."

Winehouse released only two albums in her lifetime -- 2003's "Frank" and the chart-topping "Back to Black" in 2006. Both shot up the music charts as fans bought them to remember her by.

Gennaro Castaldo of music chain HMV said "Back to Black" was the retailer's best-selling album. It was also iTunes' No. 1 album in more than a dozen countries including the U.S., Britain, France, Germany and Canada.

Celebrity fans continued to pay tribute to an artist whose appeal crossed genres and generations.

On Twitter, singer George Michael called her "the most soulful vocalist this country has ever seen."

Soul singer Adele -- one of a generation of British chanteuses whose success Winehouse helped make possible -- said Winehouse "paved the way for artists like me and made people excited about British music again whilst being fearlessly hilarious and blase about the whole thing."

"Although I'm incredibly sad about Amy passing I'm also reminded of how immensely proud of her I am as well, and grateful to be inspired by her," Adele wrote on her website.

Jill Lawless can be reached at http://twitter.com/JillLawless