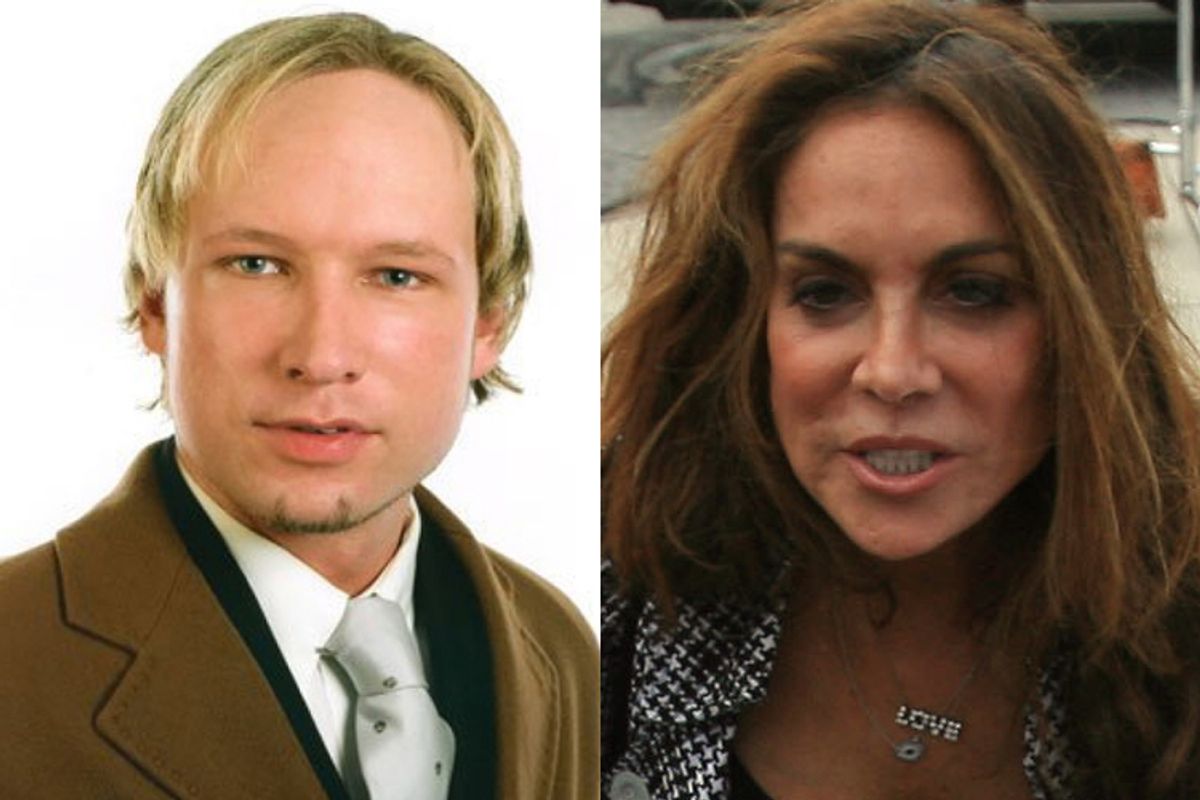 After just about every professional conservative chatterer with a blog or a Twitter account rushed to blame Islamic jihadists for the bombing and gun massacre in Norway last Friday, it was revealed that the actual killer was, in fact, a white, Christian, Norwegian-born man, named Anders Breivik. It was further revealed that Breivik is, politically, more or less a Scandinavian Tea Partyer, obsessed with the imagined threat of the Islamification of Europe, and an avowed opponent of "multiculturalism."

Breivik is a psychopath, but he is a psychopath whose politics are indistinguishable from Pamela Geller's, to name one American right-winger whose work was approvingly cited by Breivik in his extensive writings.

While I don't expect a bunch of Islamophobic pundits to take responsibility for a massacre committed in their name, it would be nice if people maybe apologized a little bit for blaming Muslims, first?

Eh, no. Jennifer Rubin, whose initial post on the attack is a monument to complete, colossal wrongness, followed up with a post in which she absolved herself of responsibility (those damn "early reports" are to blame) and blamed generic "evil" for the attack instead of a specific, dangerous ideology. And, she added, we should still totally be afraid of Muslims: "There are many more jihadists than blond Norwegians out to kill Americans[.]." Since then it's been all debt ceilings and 2012 horse-race bullshit -- I imagine if this crime had been perpretrated by a Muslim, Rubin would've had a lot more to say about it.

Mark Steyn wrote the stupidest thing I've read in at least a month. See, Breivik quoted Steyn, and a bunch of Steyn's friends and peers, in his "manifesto" -- because these conservative writers influenced his thinking -- but Steyn says Breivik doesn't count as Islamophobic because he didn't specifically kill Muslims. Steyn's argument is that because Breivik plagiarized portions of his manifesto, he ... didn't actually mean it? And quoting his writing to explain his motivation is apparently the irresponsible work of the liberal media, looking, as always, to smear conservatives:

So, if a blonde blue-eyed Aryan Scandinavian kills dozens of other blonde blue-eyed Aryan Scandinavians, that’s now an “Islamophobic” mass murder? As far as we know, not a single Muslim was among the victims. Islamophobia seems an eccentric perspective to apply to this atrocity, and comes close to making the actual dead mere bit players in their own murder.

Opposition to Islam was the killer's stated motivation. He targeted other white Scandinavians because he considered them race traitors. He wrote all of this down, too, so we don't even have to make guesses about it! He blamed liberals for enabling jihad by supporting "multiculturalism." (Funnily enough, that is also exactly what Mark Steyn thinks.)

If Steyn's intentionally obtuse response is the dumbest I've read, the Jerusalem Post's editorial is the most shocking. Because it basically says Breivik is right. He probably shouldn't have murdered almost 100 people, JPost says, but now is a good opportunity for politicians to enact Breivik's preferred policies.

Perhaps Brievik’s inexcusable act of vicious terror should serve not only as a warning that there may be more elements on the extreme Right willing to use violence to further their goals, but also as an opportunity to seriously reevaluate policies for immigrant integration in Norway and elsewhere. While there is absolutely no justification for the sort of heinous act perpetrated this weekend in Norway, discontent with multiculturalism’s failure must not be delegitimatized or mistakenly portrayed as an opinion held by only the most extremist elements of the Right.

They want this act of politically motivated violence to ... work.

If there's any humor in this miserable news, it is to be found at Pamela Geller's place, where she compares herself to the Beatles and Jodie Foster. The comparison isn't quite apt, though, as Charles Manson and John Hinkley were notorious for misinterpreting harmless pop cultural artifacts. The Beatles song was about a fair ride, it was not actually titled "There Is a Race War Coming." Breivik seems to have interpreted Ms. Geller's writing correctly -- he just decided to address the "problem" through horrible, violent means.

But right-wingers generally agree that no one should blame right-wing beliefs for Breivik's horrible crime. Instead, as one RedState contributor argues, we should blame the pro-choice movement. And euthanasia. And `... Al Gore. Is it any wonder that people kill people in a world where Al Gore something something overpopulation? No, no it isn't. Ye gods.

To sum up: This tragedy can obviously be blamed solely on one truly evil, insane person, and nothing else. Besides multiculturalism. And abortion. It is disgusting to pin responsibility for this massacre on anything besides one crazy person and multiculturalism and abortion. And Al Gore.

I can understand how the self-preservation instinct would make sober reflection among the professional hate-mongering Islamophobia crowd unlikely, but I didn't really expect everyone to be blaming the liberals for getting shot by a fucking Norwegian Freeper.