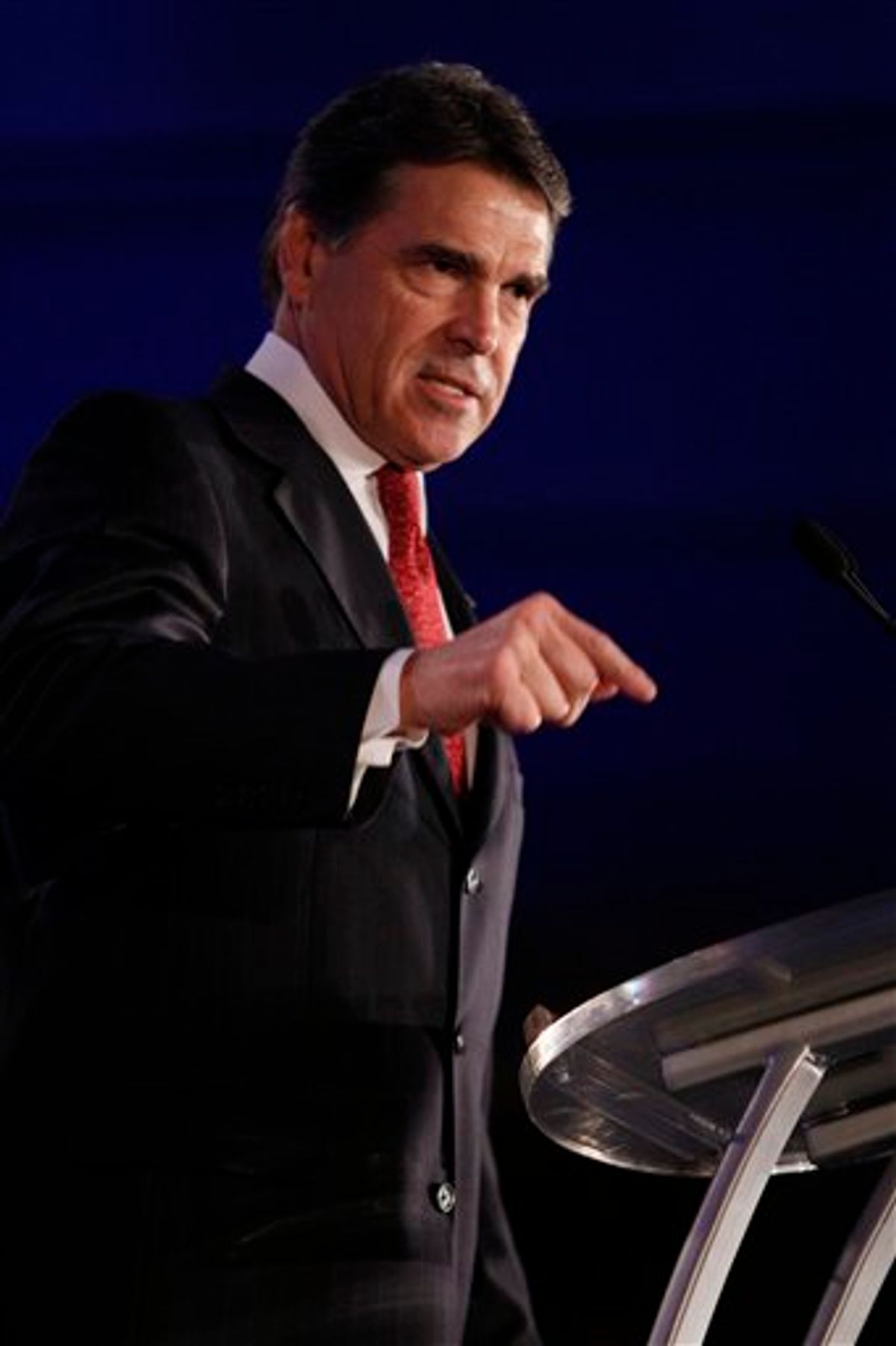 FILE - In this June 18, 2011 file photo, Texas Gov. Rick Perry speaks at the Republican Leadership Conference in New Orleans. If Perry decides to run for president, he'll attack from the Republican Party's right flank, as he would be among the GOP field's most conservative candidates. (AP Photo/Patrick Semansky, File) (AP)
--

The GOP's religious fundamentalist wing has been praying super hard for Texas Gov. Rick Perry to enter the 2012 race, because Perry is the Republican Party's foremost theoretically electable theocrat. But Perry's neoconfederate 10therism may outweigh his commitment to establishing the Christian equivalent of Shariah law in the United States, if his comments to the Aspen Institute are any indication.

"That's New York, and that's their business, and that's fine with me," Perry reportedly said, when asked about marriage equality in the Empire State.

That wasn't good enough for professional equality-opponent Maggie Gallagher, who linked to Perry's comments and approvingly quoted a bitchy response from Rick Santorum, who'd never let "state's rights" get in the way of enshrining his small-mindedness in law.

Texas’s Republican Gov. Rick Perry on Friday said he’s "fine" with New York’s approval of gay marriage because such decisions should be left up to states.

That prompted a response from Republican presidential candidate Rick Santorum, who tweeted overnight: "So Gov Perry, if a state wanted to allow polygamy or if they chose to deny heterosexuals the right to marry, would that be OK too?"

Good point, Rick! (Though I would've gone with, "if a state wanted to allow human beings to be bought and sold as property," because Perry's position on that particular constitutional question still seems kind of fuzzy.)

Kathryn Lopez is obviously disappointed in Perry, and I imagine her carefully tearing out the glittered Perry photos she glue-sticked into her scrapbook, shortly after hitting publish on this post:

I realize that Rick Perry is a big state’s rights’ guy, but that is a fascinatingly shocking thing for someone supposedly running for the Republican nomination to say, and the weekend a new definition of marriage debuted in the state of New York. Seems to be conflict with the idea that he would be an obvious choice for social conservatives.

A fascinatingly shocking thing, for Perry to decide that whatever those freaks in New York want to do is their own damn business.

Perry's constitutional answer to the gay marriage question might actually be a sign of seriousness about the 2012 race. He can see how well Santorum's doing as the official candidate of the social cons, after all.