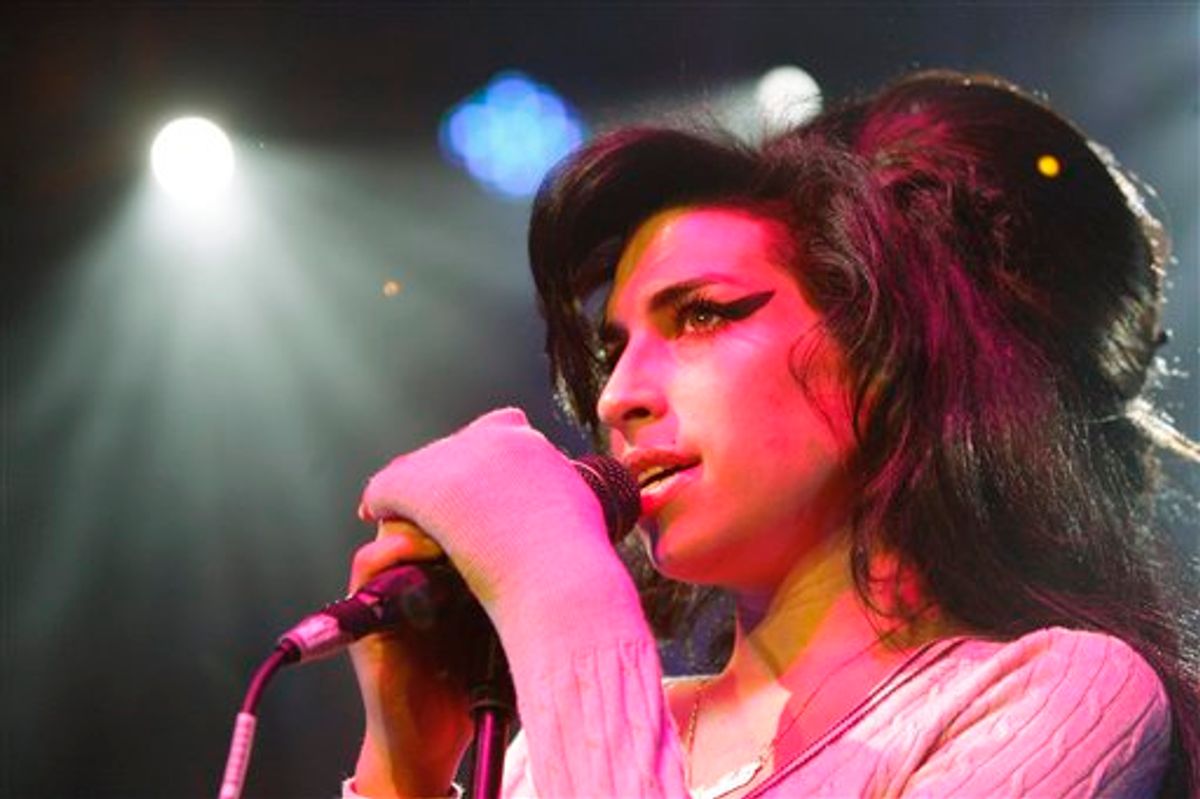 FILE - In this Oct. 25, 2007 file photo, British singer Amy Winehouse performs during her concert at the Volkshaus in Zurich, Switzerland. Winehouse was found dead Saturday, July 23, 2011, by ambulance crews who were called to her home in north London's Camden area. She was 27. (AP Photo/Keystone, Steffen Schmidt, File) (AP)
--

Friends and family said goodbye to Amy Winehouse Tuesday with prayers, tears, laughter and song at a funeral ceremony in London.

The singer's father, mother and brother and close friends, along with band members and celebrities -- including producer Mark Ronson and media personality Kelly Osbourne, her hair piled beehive-high in an echo of the singer's trademark style -- were among several hundred mourners attending the service at Edgwarebury Cemetery in north London.

Photographers and a few fans lined the lane outside.

The Jewish service was led by a rabbi and included prayers in English and Hebrew and reminiscences from Winehouse's father, Mitch Winehouse. The cab driver and jazz singer, who helped foster his daughter's love of music, ended his eulogy with the words "Goodnight, my angel, sleep tight. Mummy and Daddy love you ever so much."

It ended with a rendition of Carole King's "So Far Away," one of Winehouse's favorite songs.

"Mitch was funny, he told some great stories from childhood about how headstrong she was, and clearly the family and friends recognized the stories and laughed along," said family spokesman Chris Goodman.

"He stressed so many times she was happier now than she had ever been and he spoke about her boyfriend and paid tribute to a lot of people in her life."

The service was being followed by cremation at London's Golders Green Crematorium before the family begins Shiva, a Jewish traditional period of mourning.

The soul diva, who had battled alcohol and drug addiction, was found dead Saturday at her London home. She was 27.

An autopsy held Monday failed to determine the cause of the singer's death. Police are awaiting the results of toxicology tests, which will take two to four weeks.

On Monday the singer's father, mother and brother visited the house where she died, thanking mourners who had left flowers and cards.

Father Mitch Winehouse said "Amy was about one thing and that was love."

"Her whole life was devoted to her family and her friends and to you guys as well," he told fans.

Winehouse released only two albums in her short career -- winning five Grammy awards for the second, "Back to Black" -- and often made headlines because of drug and alcohol abuse, eating disorders, destructive relationships and abortive performances.

Since her death, her records have re-entered album charts around the world, and tributes have poured in from fans and fellow musicians.

George Michael called her "the most soulful vocalist this country has ever seen," and soul singer Adele said she "paved the way for artists like me and made people excited about British music again."

Mesfin Fekadu in London contributed to this report.