The rise of Europe's extreme right

In the wake of the attacks in Norway, we take a look at the continent's rabidly anti-immigrant groups 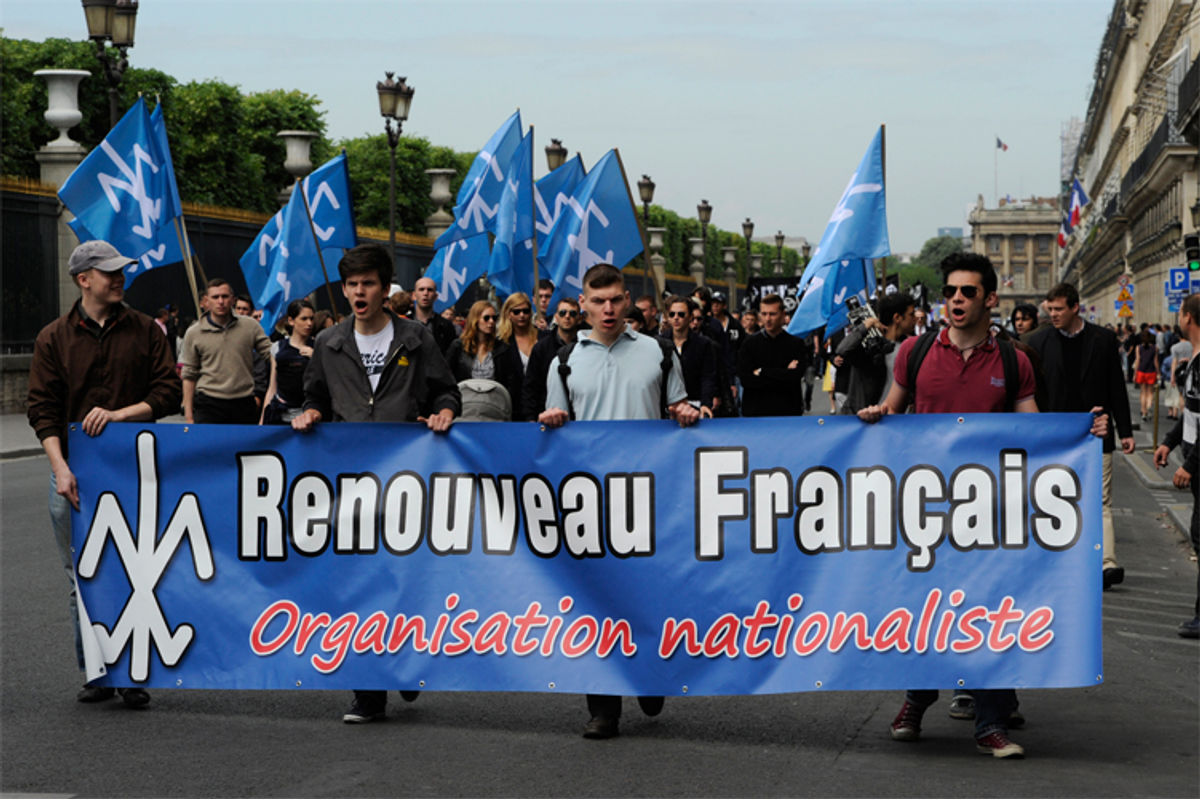 Members of French far right organizations take part in a protest march in Paris May 8, 2011
--

The horrific acts attributed to Norwegian Anders Behring Breivik appear to have been motivated by a hatred of Muslims and distaste for cultural diversity. While Breivik distanced himself from organized politics, his rhetoric has put Europe's growing far-right parties in the spotlight. Here is a roundup of what's happening on the extreme right in some key European countries:

Ethnic tensions in Bulgaria have led to violence against Muslims. This spring supporters of the far-right Ataka party hurled stones at Muslims gathered for prayer. While the party's leader, Volen Siderov, denies that he has incited ethnic or religious hatred, experts worry that far-right political leaders are using xenophobic rhetoric to rile up supporters prior to this fall's elections.

The French government has responded to Islamophobia by sponsoring debates on religion and national identity. But politicians evidently don't see xenophobia as a path to political power. Taking over leadership of the far-right National Front from her father, Jean-Marie Le Pen, earlier this year, Marine Le Pen eschewed anti-Semitism in favor of a less controversial support for secularism. She is considered a threat in France's 2012 presidential election.

While Breivik had lost faith in democratic politics and decided that only violence would overthrow multicultural society (a decision detailed in a rambling manifesto attributed to him), others are joining organized anti-Islam movements. One thousand people attended a conference held in Paris last December described as the birth of a pan-European anti-Islam movement, according to organizers.

Last fall, German Chancellor Angela Merkel's comment that multiculturalism had "utterly failed" sparked an international debate. Her remarks followed the publication of a book by Thilo Sarrazin that argued that immigration was bringing about Germany's demise. They tapped into a growing anti-Islam sentiment in Germany, which has a new anti-Islam party. Germany's Freedom Party has ties to the Dutch Freedom Party, headed by anti-Islam firebrand Geert Wilders.

While the world focuses on Greece's debt crisis, racial tension is rising along with the population of immigrants. Far-right parties have gained support while immigrants from Afghanistan and elsewhere have been targets of violence.

Dutch anti-Islam leader Geert Wilders called Norway's Breivik a "sick psychopath" and insisted that his Freedom Party, "abhors everything the man stands for." Breivik had called Wilders a "steadfast" defender of Western values and listed him among the people he'd most like to meet.

Last month a Dutch court decided Wilders didn't incite hatred of Muslims and that his rhetoric -- such as comparing the Quran to Adolf Hitler's "Mein Kampf" -- is protected under freedom of speech.

Violent nationalism has been growing in Russia since the fall of the Soviet Union. For the most part, it shows itself in the form of attacks on immigrants and people from Russia's troubled Caucasus region. But nationalists have also taken responsibility for major attacks, including the 2009 bombing of the Nevsky Express train from Moscow to Saint Petersburg, which claimed 27 lives. Two nationalists were convicted of the 2009 shooting deaths of human rights lawyer Stanislav Markelov and journalist Anastasia Baburova. Far-right nationalists get political representation in the form of the LDPR party and its longtime leader Vladimir Zhirinovsky, known for his over-the-top rhetoric. But violent nationalists have plenty of informal groupings to choose from. Earlier this year, two main groups that were banned by the Russian government -- Slavic Union and the Movement Against Illegal Immigration (DPNI) -- joined forces to form a new group, called Russians. Each year, the far-right is allowed to hold a rally in Moscow, which draws thousands of nationalists and skinheads. Russia saw some of its biggest nationalist violence in years in December, when far-right activists, along with football hooligans, marched on the Kremlin and beat non-Slavic passersby, killing at least one person.

Last fall, the anti-immigration Sweden Democrats won 5.7 percent of the vote and, for the first time, seats in the parliament. At the time, many Swedes said the party's success would be short-lived, saying voters were protesting mainstream parties and didn't understand what the Sweden Democrats stood for. But in December a botched terrorist attack in central Stockholm -- which only took one life, of the Iraqi-born Swedish attacker -- gave new impetus to Sweden's far-right, anti-Islam groups.

The English Defence League (EDL), founded in 2009, is the latest in a line of far-right parties to surface in England at the interface of racist organizations and football hooliganism since the early 1980s. The most prominent of these was the National Front. But where the Front was overtly anti-Semitic and racist, the EDL claims it is just against Muslim extremism, Sharia law and greater Muslim immigration.

The EDL has garnered headlines by organizing demonstrations that march through heavily Muslim neighborhoods in provincial cities like Luton and Bradford. Its first demonstration was organized in Luton, a provincial city about 35 miles north of London, in response to a protest against troops returning from Afghanistan by the Muslim extremist group al-Muhajiroun. If its intention is to provoke fights with Muslims and confrontations with police, it has been relatively successful. Over the last two years it has held about 25 demonstrations, the majority of which have provoked violence.

It has worked hard to differentiate itself from the traditional anti-Semitism associated with most blood-and-soil, far-right groups and has even invited a rabbi to address one of its rallies. Today on its website it denies any links with the Norwegian Anders Behring Breivik. In a statement it says. "It would seem shameful that journalists have been all too quick to link the English Defence League to this murderous creature."

Miriam Elder in Moscow and Michael Goldfarb in London contributed to this report.