What will "the male pill" change?

Experts explore how a contraceptive for men could impact relationships, condom use, infidelity and more 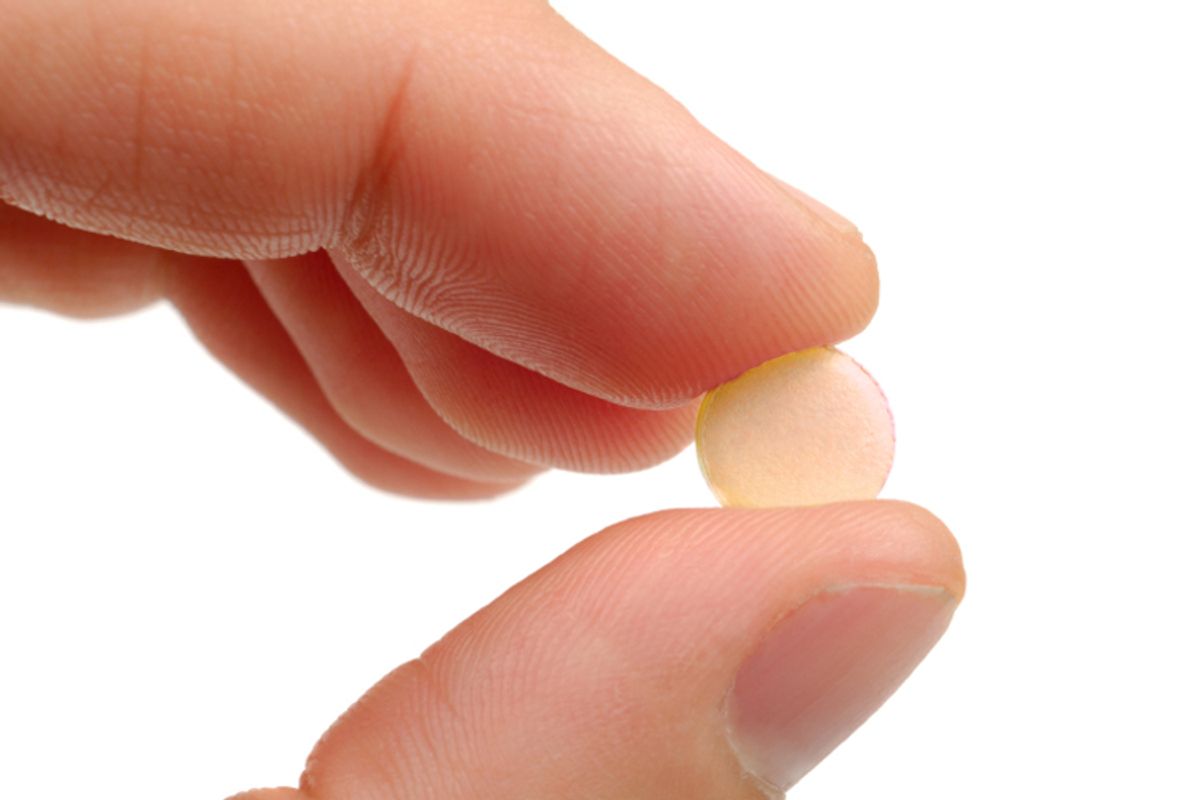 The birth control pill changed everything for women, allowing greater freedom to pursue higher education, careers and, yes, sex. Now just imagine what kind of social change a contraceptive for men would bring.

That's one question that has largely been ignored amid a recent up swell in buzz about promising scientific advances in the search for "the male pill" -- just as it is every time this perennial topic is raised. Once again, the conversation centers on why we don't have it already (Big Pharma doesn't see it as profitable), how soon this innovation will happen (the joke in the medical community: It's been five years away for the past 30 years) and whether or not men will actually go for it (50 percent say they're interested). If we're going to try to make social forecasts based on a hypothetical future innovation, we might as well consider the more compelling issue of what it could mean for relationships and sex.

So, I went to a range of experts -- from anthropologists to sociologists to sexologists (and even some not ending in "-ogist") -- and asked them to, well, predict the future.

Sorry, fellas, but they do not prophesize a sexual revolution comparable to the one brought about by the Pill. No big surprise there, right? As historian Andrew Russell told me, "The liberating effect of the Pill in the 1960s was magnified in many ways by the distance that it created between that decade and the repressive norms of the 1950s and earlier decades," he says. "I don't think the 2010s need emboldened men as much as the 1960s needed liberated women." Elaine Lissner, director of the Male Contraception Information Project, agrees: "It'll be more subtle, because when the Pill was introduced, you were starting closer to zero."

That it won't compare to the upheaval brought by the Pill isn't to say that it won't have a significant cultural impact. Carol Queen, a Good Vibrations staff sexologist, told me that it might allow men to "aspire" to have more sex, perhaps with more partners. She says this "may free up women to further explore sexual possibilities" as well as "further challenge monogamy and hasten the open discussion of positive alternatives to monogamy." Most experts expect it would decrease the rate of unplanned pregnancies, but Queen suggests that comes with the risk that "contraception will feel more immediate and necessary than safer sex prophylaxis." The result could be "that pill-popping males may be even less inclined to use condoms," she says, "maybe especially when they're out on the town, not at home with partners where they'll have to wonder what room to put the bassinet in if sperm should meet egg."

That raises the dreaded issue of infidelity: A male birth control pill could certainly come as a relief to cheaters who would rather not have their lives complicated by a so-called "love child." A man who expects to stray but doesn't trust himself to reliably use a condom could rely on a long-term form of birth control, one that doesn't have to be taken as a pill every day. While on the subject of lies and deception, we might as well consider that it would be of great comfort to men who worry about partners intentionally missing pills in order to get pregnant without their consent, as well as those troubled by that classic male problem of paternity uncertainty. In an AskMen.com message board conversation about the potential for "the male pill," one user writes, "i want to be there the first time a girl says to her bf 'im pregnant, we need to get married' and he goes 'well it cant be mine, so have fun marrying the other guy.'"

Queen is most interested to see whether a male contraceptive will mean that men will "begin to identify more as responsible for any potential pregnancy," she says. "If women were to have men around who would gladly step up to the plate on this issue, it would, perhaps, shift a ground-level dynamic in male-female relationships having to do with power and trust." That could have a profound impact on the way that we approach reproductive rights in this country. Consider, for example, the recent argument over whether insurance companies should be required to cover birth control as preventative care: A male contraceptive would evade the opposition's argument that certain forms of birth control are actually abortion. "As far as the abortion issue, this is about as far away from an egg as you can get," says Lissner. "Only if you believe that every sperm is sacred and no seed should be spilled can you be against a method like this" -- or if like the Catholic Church you oppose "artificial" contraception.

Typically, women have had extra motivation as the caregiver to prevent unplanned pregnancies, but Linda Gordon, a history professor at New York University, points out that men are increasingly sharing parental responsibility. She says, "I think the main reason people want to have fewer children now is economic, so I think that's going to give men more incentive." Still, it's the woman whose body is transformed by pregnancy and, indeed, Gordon points to a survey by one of her students showing that women -- or at least female college students -- trust men less than men trust women to reliably take oral contraceptives. In fact, "a lot of men don't trust themselves," Gordon, author of "Woman's Body, Woman's Right: The History of Birth Control in America," says. "They will say, quite frankly, that they think they're not as disciplined as women are with things having to do with sexual reproduction."

It may be some time yet before we find out for sure. Despite the recent flurry of optimistic press coverage, Carl Djerassi, a chemist who helped develop the very first oral contraceptive, says there are impassable practical, economic and legal obstacles still in the way. In an email, he told me, "I do not see the faintest chance of one being approved in the next couple of decades."