President Obama could theoretically use the 14th Amendment to end the crisis. But he won't -- and here's why 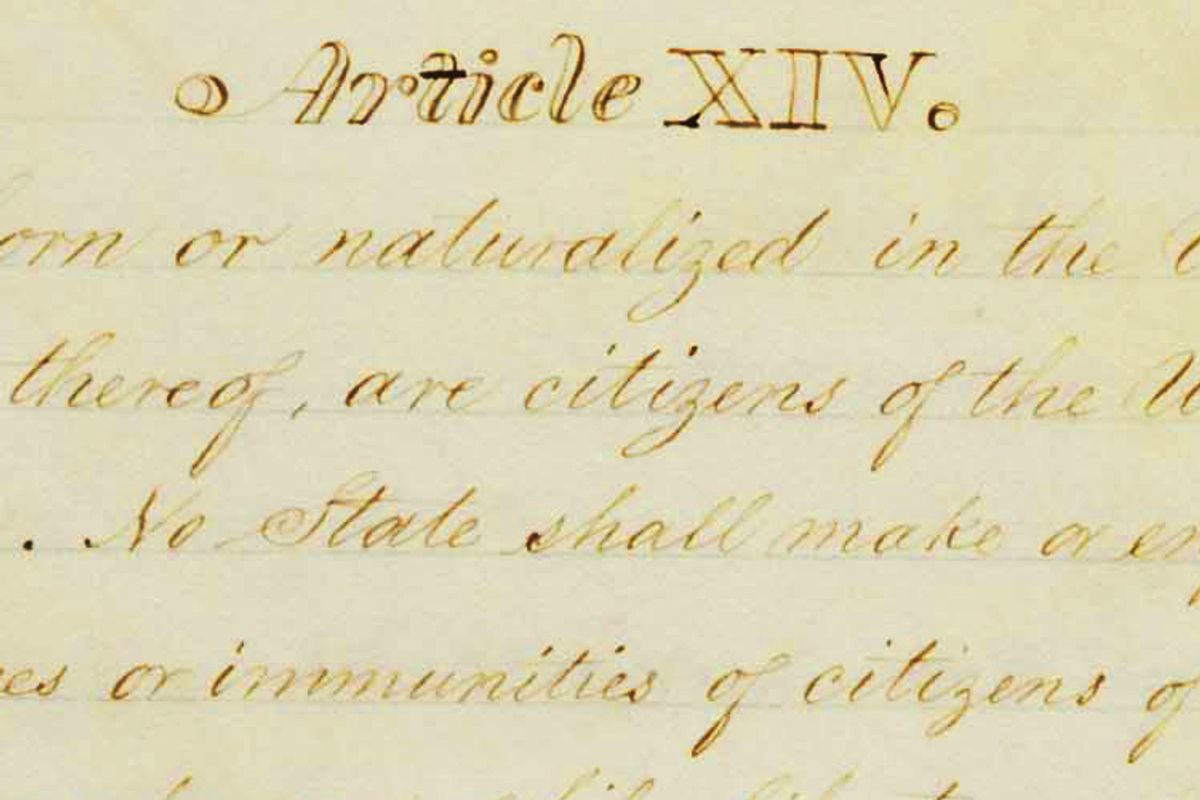 That, at least, is the theory that suggests Obama could cite the 14th Amendment of the U.S. Constitution as requiring that the government continue to pay its bills, even if Congress fails to raise the debt ceiling.

The relevant language, from Section 4 of the 14th Amendment, seems clear enough:

"The validity of the public debt of the United States, authorized by law, including debts incurred for payments of pensions and bounties for services in suppressing insurrection or rebellion shall not be questioned."

The original intent was to prevent the South, should it ever regain control of the U.S. government, from repudiating Civil War debts. Does it apply now? No one really knows, but Bill Clinton made some news recently when he declared to Joe Conason that if he were president, "he would invoke the so-called constitutional option to raise the nation's debt ceiling 'without hesitation, and force the courts to stop me' in order to prevent a default, should Congress and the President fail to achieve agreement before the August 2 deadline."

Even more aggressively, two law professors argued in the New York Times on Saturday that Obama didn't even need to bother with the 14th Amendment -- he should just unilaterally raise the debt ceiling while citing "the necessities of state."

When Abraham Lincoln suspended habeas corpus during the Civil War, he said that it was necessary to violate one law, lest all the laws but one fall into ruin. So too here: the president may need to violate the debt ceiling to prevent a catastrophe -- whether a default on the debt or an enormous reduction in federal spending, which would throw the country back into recession.

It is easy to understand the attraction of imagining the president getting all up in Congress' business and acting, well presidential (although, I must say, it is a little queasy-making to imagine what, oh, President Michele Bachmann might think justified by "necessities of state"). The 14th Amendment solution represents a kind of get-out-of-debt-ceiling-jail-free card that Obama could employ at the last second, when partisan gridlock threatens the security of the nation. Or, perhaps more plausibly, at least the threat that Obama might take the 14th Amendment path could erase his "President Pushover" image and call the Republican bluff once and for all.

But there are two compelling reasons why we are very unlikely to see Obama take this route. First, it might not solve the problem, and second, Barack Obama just hasn't established himself as a unilateral, constitutional-crisis-causing kind of guy (except maybe in cases where leaders of al-Qaida are concerned).

So, first: Would taking action under the 14th Amendment make the debt ceiling crisis go away? Highly dubious. Not only would the House GOP immediately start impeachment proceedings, but, as several commentators have observed, there's a real question as to whether investors would continue to buy U.S. Treasuries while the legalities of the president's action were settled. Pretend you are China -- do you think it's a wise move to keep buying U.S. government debt while the U.S. goes through a constitutional crisis? Using the 14th Amendment to protect the ability of the U.S. to pay its debts becomes a lot less attractive if as a consequence, borrowing costs for the U.S. government rise sharply.

Second: Is President Obama the kind of leader who would pursue this route? All we need to do to answer this question is review his speech to the nation Monday night. He made a big point of criticizing the Boehner debt ceiling plan, but there was one word he did not mention. Veto. He never said explicitly that he would veto a short-term debt ceiling hike, even though for months he has repeatedly expressed strong opposition to short-term solutions.

Monday night's speech was a huge cop-out. If the president wants to establish credibility on the debt ceiling fight, he needs to draw some firm lines. If he thinks the Boehner plan would be a disaster for the nation, he needs to tell us, in no uncertain terms, that he will veto it if it ever reaches his desk.

And if he can't tell us as much as that; if he can't even threaten to veto the Boehner plan, then why in the world would anyone imagine that he would be likely to take the much more dramatic step of unilaterally declaring the debt ceiling null and void? It just is not a plausible scenario.

UPDATE: Well, that was quick. A tweet from NBC's Jesse Rodriguez informs us that the Associated Press is reporting that the White House has threatened to veto the Boehner bill.

Does that mean Obama is ready to go the next step, and declare the debt ceiling unconstitutional? Still seems doubtful, but the news is an encouraging sign of backbone.