The return of a zero-sum world

Reaganomics and Rubinomics are both doomed. What will replace them? 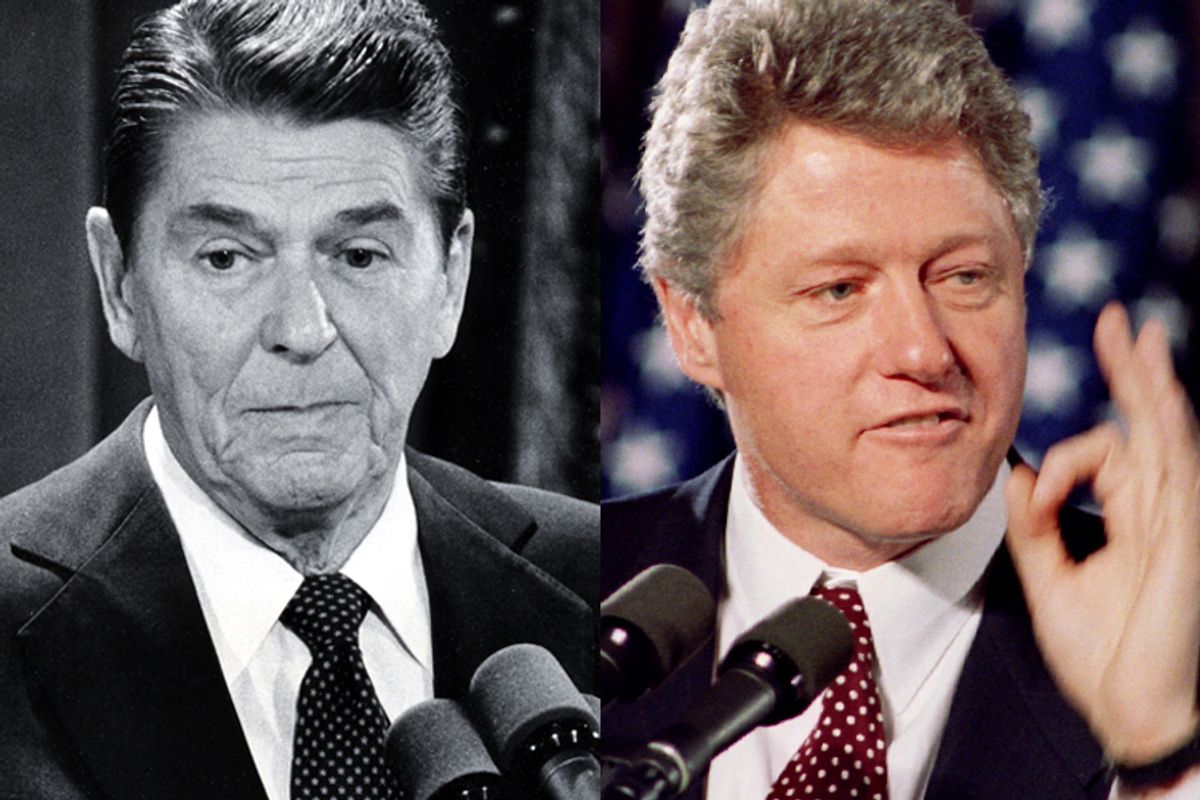 In his short story "The Facts in the Case of M. Valdemar" (1845), originally published as a hoax, Edgar Allan Poe described a dying man who was hypnotized precisely at the moment of his death. The hypnosis preserved him for some time, until the hypnotist broke the spell. As a result, "his whole frame at once -- within the space of a single minute, or even less, shrunk -- crumbled -- absolutely rotted away beneath my hands. Upon the bed, before that whole company, there lay a nearly liquid mass of loathsome -- of detestable putrescence."

At the moment, the American body politic resembles the body of M. Valdemar. To be more precise, both American conservatism and American progressivism in their familiar forms are dead, but decay has not caught up with them yet, because both are in a state of suspended animation.

The world changed radically when the global economy crashed in 2008, but the news has not yet reached Washington. The Republicans are giving long-discredited Reaganomics another good old college try, while Barack Obama, having surrounded himself by veterans of Bill Clinton's economic team, is practicing, or malpracticing, 1990s style neoliberalism, or "Rubinomics," named after Democratic Party fundraiser and Clinton Treasury Secretary Robert Rubin.

Reaganomics and Rubinomics were both toxic political byproducts of the generation-long asset inflation of the late 20th century in the United States. As long as the bubble lasted, their exploding wealth permitted Wall Street "bundlers" or fundraisers to capture both national parties by dominating campaign finance. Financialized conservatism differed from financialized progressivism, but the two schools of thought were both based on cheerful happy-talk scenarios in which there were no deep conflicts of interests between the rich and the rest in America.

Robert Wright, borrowing the concept of cooperative "non-zero-sum" and competitive "zero-sum" games from mathematical game theory, caught the utopian spirit of the Bubble Era in his bestseller "Non Zero: The Logic of Human Destiny" (2000). Both Reaganomics and Rubinomics depend on a non-zero-sum economy in which everybody goes home with a prize and "a rising tide lifts all boats." The right's trickle-down theory assumes that as the few get richer, the many will get richer as well, eliminating distributional conflicts among classes.

New Democrat neoliberalism in the tradition of Rubin, Clinton and Obama also posits a non-zero-sum game -- it might be called "social promotion" theory rather than trickle-down theory. In social-promotion progressivism, the New Deal project of progress through more money for the majority -- higher market wages and more contributory tax-based social insurance -- has been replaced by the New Democrat project of redefining social mobility as educational credentials and high-paying professional jobs for the majority. According to the neoliberal happy-talk narrative, as the children of the working class go to the university and join the ever-expanding college-educated professional class, there will be a labor shortage at the bottom. The labor shortage can be filled not only by the native poor but also by vast numbers of immigrants, whose entry into the labor market will not lower wages or raise the costs of welfare. The outsourcing of American industry doesn't matter, the neoliberals told us, because even if everything is made in China, the inventors, bankers and consultants will stay in America, and their posh ranks will include the upwardly mobile children of former manufacturing workers. Win-win, zero-sum, everybody's happy!

But the world of Reaganites and Rubinites collapsed in 2008, when it became clear that much American and global wealth had been illusory. In the past few years, the government has sought to prevent investors who bought toxic junk and homeowners who bought overpriced houses from simply eating their losses, as speculators are supposed to do when they make bad bets. But this policy has merely kicked the can down the road. At some point, as in the case of M. Valdemar, the mass of dead money will have "shrunk -- crumbled -- absolutely rotted away." A lot of Americans, most of them rich people or affluent professionals, will face the prospect of being much poorer, permanently.

The most probable outcome, when the depth of wealth destruction becomes clear, is likely to be crony capitalism -- the use of political power to provide jobs and income for a much greater number of self-styled "venture capitalists," corporate managers, nonprofit workers, university professors and highly paid public sector managers (not ordinary civil servants like schoolteachers and police officers) than the slowly growing, post-crash economy can actually afford. The right will try to preserve and expand a simulacrum of free enterprise, in the form of defense contractors and privatized welfare state functions. The left wing of the elite will try to create a zombie economy based on taxpayer-subsidized "green industries" that would collapse without tax subsidies and mandates on utility rate-payers. Each party will try to cut the zombie sector of its rival in order to fund its own pet zombies. In the long run, the attempt to prevent an elite economy that is already dead from decomposing, by putting it into suspended animation, is unlikely to succeed, but the project could last a decade or two. Bubble Conservatism and Bubble Progressivism will morph into Zombie Conservatism and Zombie Progressivism.

Less in the spirit of Adam Smith or John Maynard Keynes than of Edgar Allan Poe, self-described "conservatives" and "progressives" will struggle to create an American zombie economy with protected enclaves for the managerial and professional elites. Meanwhile, most ordinary Americans will work in industries that, unlike elite zombie sectors like defense, private healthcare, higher education, the higher civil service and the subsidized green economy, are not rigged and protected from competition. American workers in the dwindling manufacturing sector will continue to face competition from low-wage workers and state capitalist regimes abroad. Many more American workers in the domestic service industry will face competition from immigrants, particularly in low-wage jobs. As the "classes" wall themselves off from competition in their protected, subsidized crony capitalist and nonprofit and public sector jobs, the masses are likely to insist that they, too, deserve to be protected from zero-sum competition with foreign workers and immigrants.

To make matters worse, if the crony capitalists of the right succeed in cutting back Social Security and Medicare, American wage-earners will be compelled to pay more of their stagnant incomes to private mutual fund managers and insurance companies. And if the green crony capitalists of the left succeed, working Americans will be forced permanently to pay artificially higher utility bills to subsidize politically-connected "venture capitalists" who will derive a permanent, rigged stream of income from zombie green corporations, whose uneconomical solar and wind energy will be purchased by utility companies under legal mandates written by green lobbyists.

At the moment, the Tea Party has tapped into popular anger, but it represents the last gasp of a dying Reaganism, not a genuine populist alternative. At some point, a national populist movement in the spirit of Ross Perot, Patrick Buchanan and Lou Dobbs will almost certainly reappear in the United States. As in Europe, the next American populism is likely to focus on immigrants, who compete with many American workers, more than on trade, which affects comparatively few. Needless to say, the servant-bossing elites of both parties can be counted on to cry "Racism! Nativism!" at the prospect of having to pay Americans to perform tasks done now by Central American maids, European au pairs and East Asian tutors.

Protectionism and immigration restrictionism have been the typical responses of nations to depressions before, in the 1870s, the 1890s and the 1930s. These policies don't work well, in the theoretical sense that they do not promote long-term global growth as well as would a combination of liberal trade and immigration policy with coordinated, demand-expanding Keynesian expansionary policies among all nations at the same time.

But protectionism and immigration restriction can succeed in the short run. If you preserve your domestic market for domestic producers, you encourage domestic investment and create domestic jobs, as multinational companies, whether nominally American or foreign, are forced to locate production in the U.S. in order to have access to American consumers. This assumes that many if not all customers will have no choice but to buy necessary goods from the protected national industries. Similarly, if you reduce the flow of immigrant labor, you create domestic jobs, assuming a fixed demand for necessary, labor-intensive services in sectors like healthcare. In the long run, your country and others will be worse off than they would be in an imaginary world without barriers to the free flow of goods, labor and capital. But that is like arguing that we would all be better off in "Star Trek's" imaginary United Federation of Planets.

Which side will ultimately prevail in America and other Western democracies -- the crony capitalists or the national populists? In some Western countries, national populists may successfully combine support for the welfare state with restrictions on outsourcing and mass immigration. In others, like the United States, the crony capitalists of the oligarchic left and oligarchic right may create Latin America-like societies, in which a cosmopolitan, globe-trotting elite dwells in fortified communities and downtowns and rural manors, surrounded by a mass of the poor and near-poor, for whom the "progressive" crony capitalists seek slightly higher levels of means-tested welfare.

My guess is that in most first-world countries the national populists will eventually succeed. The depressions of the 19th and 20th centuries produced waves of nationalism, protectionism and immigration restriction; why should this recession, which is looking more and more like a depression, be any different? Such an outcome would be resisted by America's financial elite and its professional elite, including liberal professionals. But both of these economic elites are much too big to be sustained by a slow-growing U.S. and world economy. Both elites will be downsized in the years to come, and while their political power will remain disproportionate, it will weaken.

You can be certain of one thing. If you think that today's American politics is bitter and polarized, wait until upscale crony capitalists of left and right who seek to tax America's impoverished workers to subsidize their zombie economic sectors collide with working-class Americans demanding labor-market protection from immigrant competitors and imports. Fasten your seat belts. Things are going to get nasty.