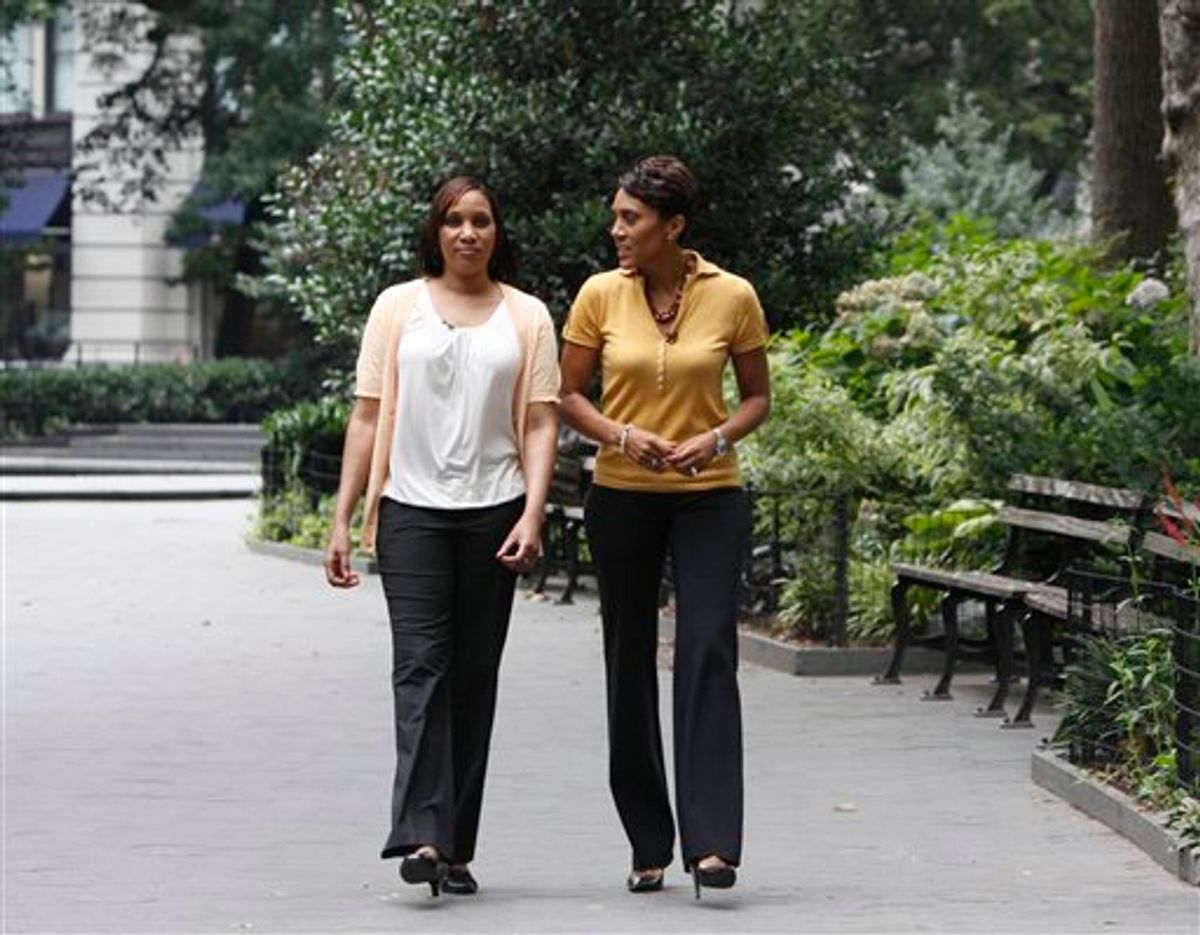 In this undated photo provided by ABC News, Robin Roberts, right, talks to Nafissatou Diallo, the alleged victim in the Dominique Strauss-Kahn assault case. Diallo told the network she never wanted to be in the public eye but had no choice, amid questions about her credibility. Lawyers for Strauss-Kahn told ABC that the interview was "an unseemly circus" designed to inflame public opinion. (AP Photo/ABC News, Heidi Gutman) (AP)
--

The top prosecutor handling the sexual assault case against former International Monetary Fund leader Dominique Strauss-Kahn wouldn't talk Monday after the hotel maid at the center of it made the unusual move of going public with her story.

Manhattan District Attorney Cyrus R. Vance Jr.'s office refused repeated attempts to discuss the case, which has grown shaky in recent weeks after questions about the credibility of the maid, who claims Strauss-Kahn forced her to perform oral sex.

"I want justice," Diallo told ABC News. "I want him to go to jail."

With her interviews, the 32-year-old Guinean immigrant, prosecutors' star witness, ripped off the veil of privacy that authorities had kept around her. Prosecutors have provided her with housing and paid her daily expenses to keep her from the media maelstrom.

She defied prosecutors' conventional wisdom about accusers speaking publicly before trial -- it's generally seen as providing defense lawyers material to mine for contradictions and questions. Her move could widen a rift between prosecutors and their key witness, who hasn't spoken with them since late June while her lawyer called for a special prosecutor after the district attorney's office said it had developed doubts about her trustworthiness.

It's a daring and chancy strategic move for the maid and her lawyers, legal observers said.

"On the one hand, her lawyers felt they needed to up the ante because they feared the DA had lost his resolve," said Bradley Simon, a Manhattan criminal defense attorney and former federal prosecutor. "On the other hand, this has to make the DA's office quite unhappy. The more you talk, the more there's fodder for cross-examination and impeachment. That's a big problem."

Strauss-Kahn, who was considered a top contender for France's presidency, denies the attempted rape and other charges. His lawyers decried Diallo's interviews Monday as a distraction from what prosecutors have said was her history of lies about her background and inconsistencies about her actions right after when she says she was attacked.

Diallo's interviews could make the prospect of pursuing the case against Strauss-Kahn less attractive to prosecutors simply because defense lawyers could paint her as a publicity-seeker, said Pace Law School professor and former Manhattan assistant prosecutor Bennett L. Gershman.

Since prosecutors told a judge July 1 that Diallo's fabrications and inconsistencies had undermined the case, they have been reassessing evidence, analyzing the legal framework surrounding the case and gathering new information before an Aug. 1 court date.

The district attorney's office declined to comment Monday on Diallo's statements or its plans for the case.

For Strauss-Kahn, there's motivation to press for an answer on whether prosecutors plan to pursue the case. But defendants who think a case against them is weak sometimes agree to give prosecutors more time to investigate, on the theory that the more they learn, the more likely they might be to drop the case.

In the meantime, defense lawyers Benjamin Brafman and William W. Taylor denounced Diallo on Monday for waging "a media campaign intended to force a prosecutor to pursue charges against an innocent person."

Diallo's lawyer, Kenneth Thompson, said in a statement Sunday that Strauss-Kahn's lawyers "have conducted an unprecedented smear campaign against the victim of a violent sexual attack."

Adding details and her own voice to the basics authorities have given, Diallo said the former IMF leader grabbed and attacked her "like a crazy man" in his $3,000-a-night Manhattan hotel suite on May 14 as she implored him to stop. She said he pulled up her uniform dress and grabbed her crotch.

In the interviews, Diallo addresses some of the inconsistencies that already have rocked the case.

She testified to a grand jury that after the attack she cowered in a hallway and watched Strauss-Kahn leave, then told a supervisor. Prosecutors said earlier this month that she later told them she actually had gone on cleaning rooms before consulting her boss. Diallo told Newsweek she was disoriented and went into the rooms briefly before a supervisor appeared and asked why she was upset, but she denied changing her account.

Diallo also lied about her life story, telling prosecutors a story of being gang-raped in her homeland, they said. She told Newsweek she was raped by two soldiers but acknowledged she had embellished her life story in 2003; prosecutors have said she told them she repeated the lies to them to be consistent.

Before Sunday, Diallo's name had been reported by some French media outlets but not by major U.S. media, which generally protect the identities of people who say they've been sexually assaulted. The Associated Press does so unless the people agree to be named or identify themselves publicly, as Diallo has done.