My waking dream of Amy Winehouse

Maybe nothing can keep an addict from destroying herself. But I couldn't help wondering how things might have been 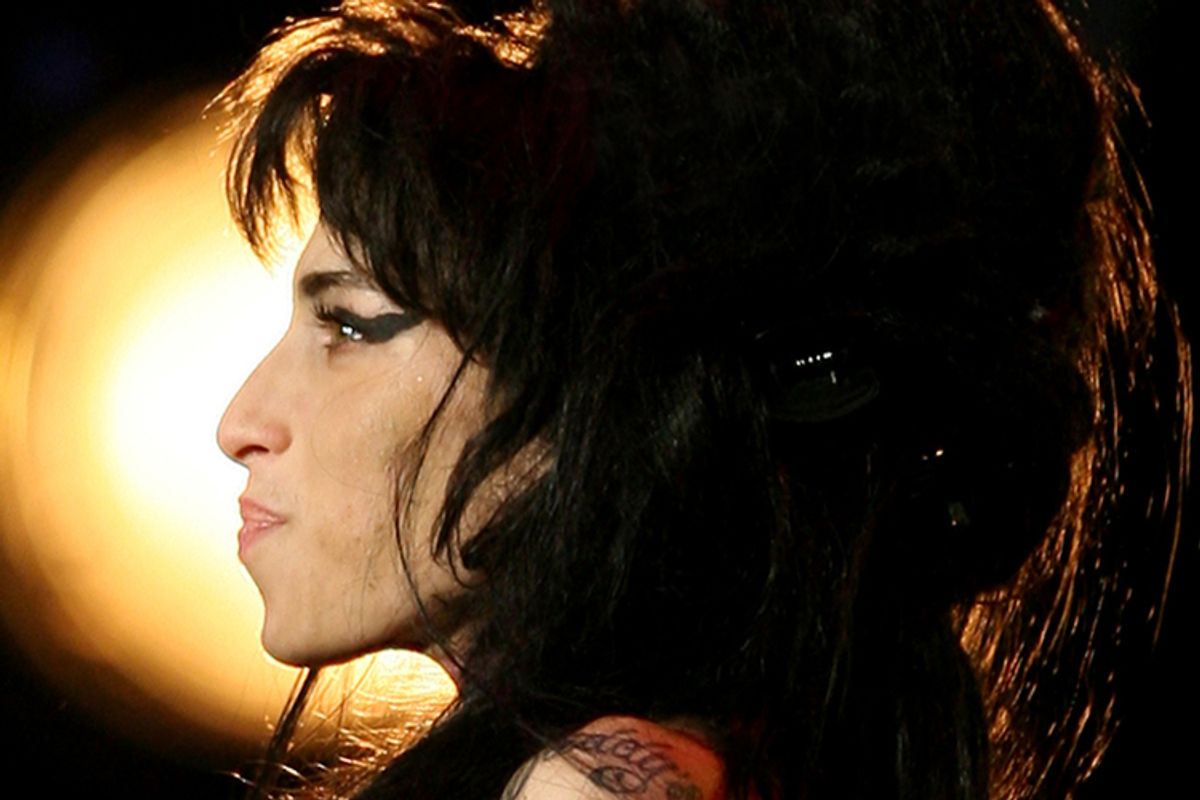 We were doing errands on Saturday morning at this shopping complex down in Daly City. I was buying galvanized gate hinges for our gate whose hinges had rusted away in the salt air. Norma was buying yarn for a sweater. Then she said Amy Winehouse had died.

What was unexpected was not the death but the crippling physical weight of grief upon grief finally piled too high, finally too much. I wanted to scream and cry. The flesh on my arms prickled. We went to the parking garage and got in the car and drove home along the coast and I emailed Salon's editors and said I had been unexpectedly moved by this death and wanted to take time off from the column to write about it.

I never knew Amy Winehouse personally, never interviewed Amy Winehouse as a journalist, was not even a big Amy Winehouse fan but as I wondered why the news had hit so hard I realized I loved her somehow. Even my passing acquaintance with her voice had made me love her. She was a lovable mess. I knew who she was. I've known people like her. I love people like her, people who are scrappy and fucked up and fearless and hopeless and brilliant and sick. Some survive. Some don't. I've been like her, too. I've been one of those people who you wonder if he'll show up, and what condition he'll be in, and if there will be trouble.

I survived being like that. So I always like it when one of us lovable screw-ups survives. It's sad when they don't make it.

Enough has been said already. So I will make this concise. I will tell you my fantasy. In my fantasy, someone at Island Records with the power to do controversial things decides that for once they are going to take a principled stand. Maybe it's somebody in the company like me who lives half the time in a dream and the other half running a company. Maybe it's somebody who has thought about some of the big changes of the past and how they happened because of an idea or gesture. This person knows how easily one can die from taking too much drugs. He senses the inevitable and has seen it happen too many times and feels fed up and exhausted and decides, in this case, with Amy Winehouse, he's going to stake his reputation on a hunch and a principle.

So this person tells the company what he plans to do. There is much arguing and derision. But the person is adamant, intoxicated by principle, and stubborn, and since the person runs the company there is nothing the rest of them can do.

So after Amy Winehouse has her suboptimal performance in Belgrade, the person running the company puts out the following statement:

"Here at Island Records, the health and well-being of our artists is absolutely paramount. It matters more to us than sales figures or our reputation for artistic excellence. Therefore, today we are taking the extraordinary step of severing our business relationship with Amy Winehouse.

"This will remain in effect until she completes one year of residential treatment for substance abuse.

"This is not a business decision. This is a moral decision.

"We realize we cannot force her to accept potentially lifesaving treatment. But neither can we in good conscience continue business as usual. Knowing what we do about addiction to alcohol and narcotics, we refuse to profit from her work any longer.

"All proceeds from her work currently due us will be donated to substance abuse rehabilitation programs for musicians, such as the Sims Foundation program currently in place in Austin, Texas."

So that was my waking dream.

Nothing we humans can do can ultimately keep an addict from destroying herself. But circumstances sometimes collude with conscience to spark that moment of clarity. It happens. It does happen, over and over. So I wonder how things might have been. I wonder about new treatments based on biochemistry and behavioral medicine. I wonder about what happens when you keep a person away from toxic insanity long enough that rehab really takes hold.

Before Amy Winehouse did her last concert, the one in Belgrade, her manager said she was OK, she'd done a week of rehab.

A week. A fucking week. Don't make the devil laugh.

She needed more than a week. She needed to go longer than a week. Because here is how it works: You keep screwing up and screwing up but eventually as long as you don't die you keep screwing up until you get it right, at least right enough that you don't need 24-hour doctors checking your pulse and guards emptying your bottles, and then, out of all that screwing up, what you end up with is a beautiful, screwed-up gift wrested from the scaly hands of demons, a one-of-a-kind curio from the beyond that shows in your voice or manner or choice of words, a memento from hell that is also a coded message to your fellow sufferers that you have been to the bottom and stared into its face and here you are, scratched up but telling the tale.