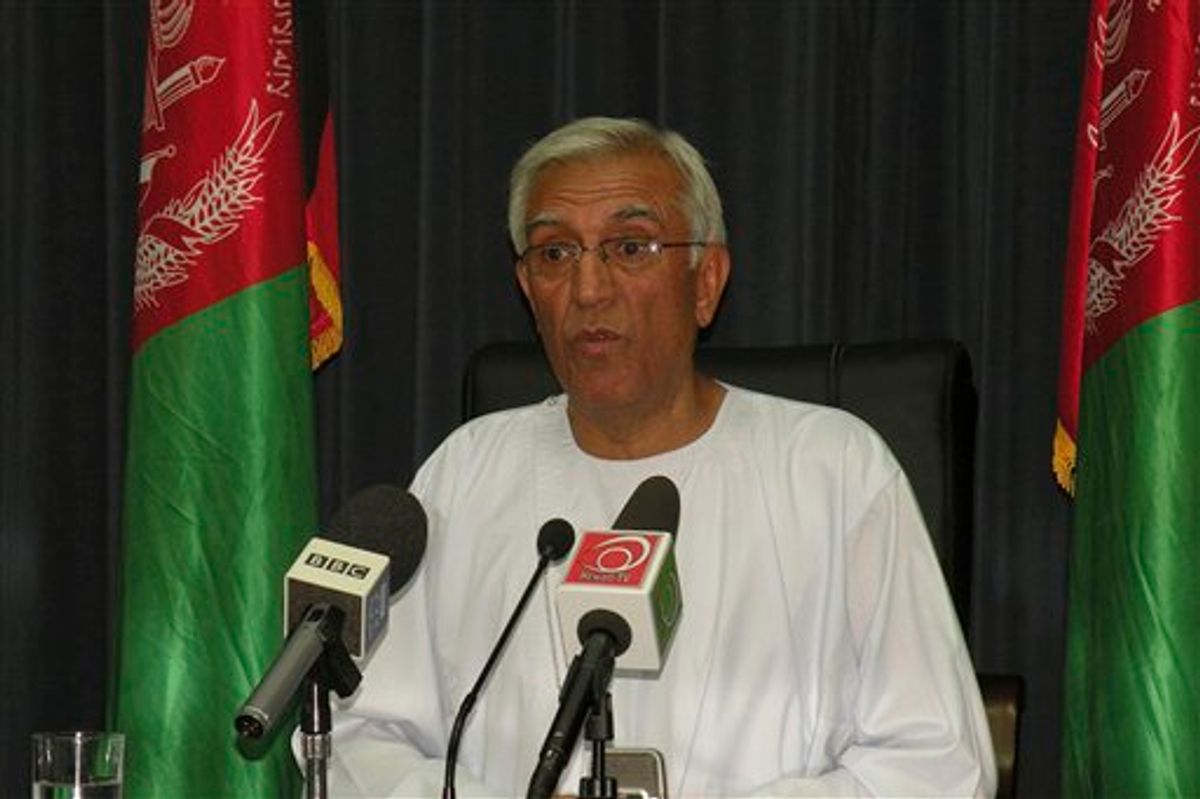 In this undated image made available by the provincial media center Kandahar Mayor Ghulam Haider Hamidi addresses a press conference in Kandahar south of Kabul, Afghanistan. The mayor of Kandahar was assassinated on Wednesday July 27, 2011 by a suicide bomber who hid explosives in his turban Afghan officials said. The Taliban say they sent the suicide bomber who killed the mayor of Kandahar in southern Afghanistan. Hamidi was the third major powerbroker from the south to be slain this month. (AP Photo/Provincial Media Center ) (AP)
--

A suicide bomber hiding explosives in his turban assassinated the mayor of Kandahar on Wednesday, just two weeks after President Hamid Karzai's powerful half brother was slain in the southern province that is critical to the U.S.-led war effort.

Mayor Ghulam Haider Hamidi, 65, was the third powerbroker from southern Afghanistan to be killed in just over two weeks, underlining fears of a surge in violence in the wake of the slaying of the president's half brother. The Taliban have claimed responsibility for all three attacks, yet the area is rife with tribal rivalries and criminals and it is not yet certain who is behind the trio of killings.

Ahmed Wali Karzai was gunned down in his home in Kandahar by a close associate on July 12, leaving a power vacuum in Kandahar and dealing a blow to the strength of the president's support as well as the stability of the south where the Taliban hold the most sway.

Five days later, Karzai's inner circle suffered another hit when gunmen killed Jan Mohammad Khan, an adviser to the president on tribal issues and a former governor of Uruzgan province, also in southern Afghanistan. A member of parliament also was killed in the July 17 attack at Khan's home in Kabul.

Taliban spokesman Qari Yousef Ahmadi told The Associated Press that they killed the Kandahar mayor because he had ordered the destruction of homes that city officials claimed had been illegally constructed. Ahmadi said the mayor was killed to avenge the deaths of two children who were killed during the demolition work.

Kandahar Gov. Tooryalai Wesa said the two children were accidentally killed by a bulldozer knocking down the homes.

During his four years as mayor, Hamidi became the enemy of the Taliban as well as others involved in criminal activities.

The mayor's son-in-law, Abdullah Khan, said Hamidi had launched a campaign against warlords and criminals and was particularly harsh on people who took illegal control of property. Just two days before the killing, he said his father-in-law had ordered several large homes torn down because they had been built illegally.

"I don't know who did this," Khan told the AP in a telephone interview. "From day one I was afraid. Even I wanted to put pressure on him to leave."

"It is up to the police to investigate, but we don't really have police that can do a good investigation," Khan said.

Ryan Crocker, the new U.S. ambassador to Afghanistan, and Gen. John Allen, the new commander of U.S. and NATO forces in Afghanistan, both condemned the assassination.

Crocker told reporters during his first briefing at the U.S. Embassy in Kabul that the assassination was indicative of the challenges ahead in Afghanistan.

"Assassinations are horrific acts -- they are acts of terror and can have major impacts," he said. "But I don't think you can chart a straight line that says that three assassinations guarantees a total unraveling either of international support or Afghan confidence. It could very well go the other way."

The mayor was killed inside the heavily fortified compound of a government building in the heart of the city just before he was to meet with citizens involved in the land dispute, according to Mohammad Nabi, an employee of the mayor's office. The explosion occurred when somebody holding a piece of paper approached him as he was walking with another person, Nabi said.

"He tried to say something to the mayor and then suddenly the explosion happened," according to Nabi, who said the man with the paper was the bomber. "After that there was some shooting. I hid behind a wall. The windows were shattered. There was dark smoke."

Black cloth with thin gray stripes that the bomber had used to wrap his turban could be seen on the ground where he detonated his explosives. Blood was spattered on the dirt ground of the compound and the trunk of a nearby tree.

The governor's spokesman, Zalmai Ayubi, said one civilian also was killed and another civilian and a security guard were wounded in the explosion.

"The suicide bomber put explosives inside his turban," said Sher Shah Yousafzai, deputy police chief in Kandahar province. "As soon as the mayor came to work, the attacker detonated his explosives."

Militants have targeted scores of government officials in Kandahar, heightening fears that security in the already volatile south is unraveling.

In April, a suicide bomber wearing a police uniform killed Khan Mohammad Mujahid, the Kandahar provincial police chief and one of the most prominent law enforcement officials in the nation. Two deputy mayors also have been killed -- one in April 2010 as he knelt for evening prayers in a mosque and another during an insurgent attack in October 2010.

Two days after the president's half brother was slain, a suicide attacker -- also with explosives hidden in his turban -- blew himself up inside a mosque where Afghan officials were attending a memorial service for him.

Hamidi, who worked in the U.S. financial sector for many years and was a U.S. citizen, was considered to be Wali Karzai's ally in Kandahar. But Hamidi operated behind the scenes and his tribal contacts were not considered strong, leading some to speculate that he could not take over for Wali Karzai, a master operator who played Kandahar's hard-line tribal and political factions against one another to retain ultimate control over the restive province.

According to the Kandahar governor's office, Karzai had offered Hamidi other posts, but that he had chosen to remain mayor. Karzai had offered to appoint Hamidi as a deputy finance minister, the head of the government's local governance unit in Kabul as well as the governor positions in Herat and Kandahar provinces.

"He was struggling with all the powerful people in Kandahar -- the land grabbers and people who were breaking the law," the governor's office said in a statement. "That's why the militants targeted him."

The gray-haired Hamidi, who was from Kandahar's Arghandab district, attended high school in Kandahar and Kabul University. He worked for 13 years in the Afghan Finance Ministry's budget department and was employed at a government bank. He moved to Pakistan and later to the United States and then returned after the collapse of the Taliban regime in 2001.