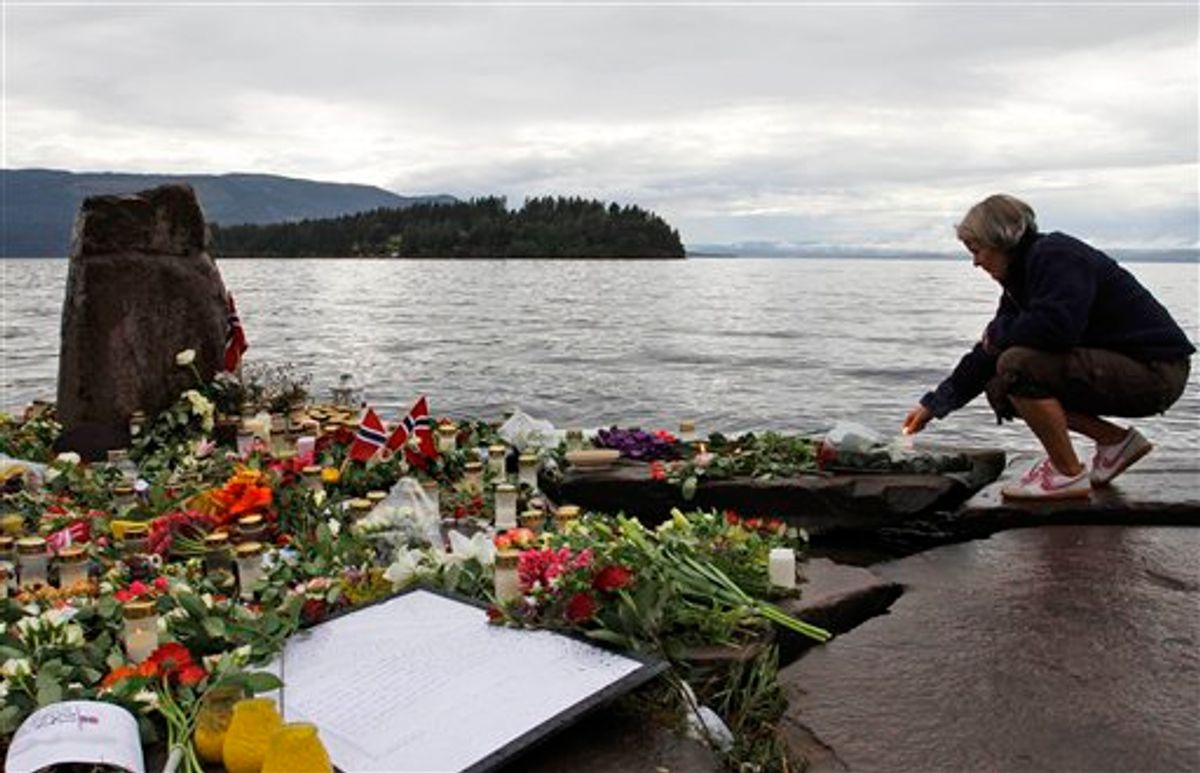 Norway's prime minister says that extremist views are legitimate but implementing them violently is not.

Jens Stoltenberg also told reporters Wednesday that Norwegians will defend themselves by showing they are not afraid of violence and that the response will "more democracy, more openness."

Last week's twin attack in the normally placid country has left Norwegians appalled and shaky, but determined to move forward. Some government workers were planning to return to work in their offices in the buildings where the bomb blasts blew out most windows.

At least 76 were killed in the attack on government buildings in Oslo and a rampage on an island youth camp.

Meanwhile, the leader of Norway's Delta Force defended the special operations team, saying the breakdown of a boat didn't cause a significant delay in efforts to reach the island where Anders Behring Breivik's shooting rampage killed 68 people.

Police have come under close scrutiny over how long it took them to reach the island after first reports of shots being fired at the island youth camp Friday. Although the island is only about 25 miles (40 kilometers) from the Norwegian capital, police needed 90 minutes to get to the scene.

A media helicopter was already hovering over the island when police arrived. Marius Arnesen, a cameraman for broadcaster NRK who shot video of the massacre at Utoya island, told The Associated Press that his helicopter arrived some time between 6 p.m. and 6:10 p.m. Police say got to the island at 6:25 p.m.

Police were already grappling with the wide damage inflicted by a bomb in the downtown government quarter that Breivik claims to have set off. When word of the shooting came, police drove rather than take a helicopter because the crew of the sole chopper available to them was on vacation. Then the first boat they tried to take to the lake island broke down.

Anders Snortheimsmoen told reporters the team immediately jumped into another, better boat. He said his team arrived at the harbor at the same time as local police and the boat mishap caused no delay.

At the same news conference, Justice Minister Knut Storberget praised the team, saying it helped "limit the tragedy" on Utoya island and the bombing in the city center. Friday's twin terrorist acts together claimed at least 76 lives.

Norwegian media are suggesting that police knew Breivik's identity even before they reached the island, tracing him through a rental car company from which he rented the panel van in which the bomb was planted.

Dag Andre Johansen, Scandinavian CEO of Avis car rental company, told The Associated Press that Breivik had rented two vehicles, including a Volkswagen Crafter van. He said police contacted the company after the bombing and got Breivik's identity confirmed. But he declined to say whether that contact came before Breivik was arrested on the island.

The vicious attack in the normally placid country has left Norwegians appalled and shaky, but determined to move forward. Some government workers were planning to return to work in their offices in the buildings where the bomb blasts blew out most windows.

But many in Oslo felt a new twinge of worry on Wednesday morning when parts of the capital's rail and bus complex was evacuated because of a suspicious abandoned suitcase. Police later said no explosives were found and that the evacuation order had been lifted. The Norwegian news agency NTB said a bus driver turned in the alarm after seeing a passenger leave the suitcase and walk into the station at a fast clip.

Police officially released the first four names of victims on Tuesday, and Norwegian media published the names and photos of some of the other victims. At least some were immigrants or their descendants.

Tens of thousands of Norwegians have rejected the suspect's rhetoric, laying thousands of flowers around the capital in mourning. Entire streets were awash in flowers, and Oslo's florists ran out of roses.

"Everyone realizes that terrorism and this kind of activity doesn't have anything to do with any religion," he told the AP. "They are individuals who can be found in any community who don't represent the majority at all."

Many of those killed were involved in the governing Labor Party, which suspect Breivik rails against in his manifesto for allowing Muslims to immigrate to Norway.

One of the victims on the island of Utoya was Gunnar Linaker, a regional secretary of the party's youth wing, which organized the camp there. His father, Roald, called the 23-year-old from the northern village of Bardu "a calm, big teddy bear with lots of humor and lots of love."

A lover of the outdoors and a devoted Labor Party member, Gunnar Linaker had been to the annual Utoya camp several times and had taken leave from his political-science studies at the university in the northern city of Tromsoe to work full time in politics, his father said.

His voice weak and trembling, Roald Linaker said he was on the phone with his son when the shooting started: "He said to me: 'Dad, dad, someone is shooting,' and then he hung up."

That was the last he heard from his son. Gunnar Linaker was wounded and was taken to a nearby hospital, where he died on Saturday. His 17-year-old sister also was at the camp but survived, Roald Linaker said. He declined to speak any further.

Police identified Gunnar Linaker and three victims of the bombing: Tove Aashill Knutsen, 56, Hanna M. Orvik Endresen, 61, and Kai Hauge, 33. Police say they're being cautious in releasing the names and are making sure families are notified and approve.

Knutsen, a secretary with the electricians and information technology workers' union, had left the office and was on her way to a subway station when the bomb exploded in Oslo's government office quarter, union head Hans Felix said.

Hauge owned a downtown Oslo bar and restaurant that was dark Tuesday. A flower arrangement outside the bar included notes from friends and a photo of him. A note beside the locked front door, handwritten in black marker, read: "Closed due to death."

The national newspaper Dagbladet posted the names and photos of 30 people it said were killed in the attacks or missing. The information, apparently received from friends or relatives, showed three victims who did not appear to be ethnic Norwegians, including Ismail Haji Ahmed, who the newspaper said had recently appeared on the "Norway's Talents" television show. Another, reported as missing, was a 20-year-old native of Iraq, Jamil Rafal Yasin.

Breivik has confessed to the attacks, according to police and his lawyer, but he has pleaded not guilty. His lawyer said Breivik sees himself as a warrior and savior of the Western world, and is likely insane.

NTB said police detonated explosives at Breivik's farm about 100 miles (160 kilometers) north of Oslo on Tuesday. Breivik said in his manifesto that he had rented the farm and created a fake business there as cover for ordering six metric tons of fertilizer -- an integral component of the Oslo bomb.