The New York Times columnist seems to be on autopilot, to judge from his latest debt ceiling contribution 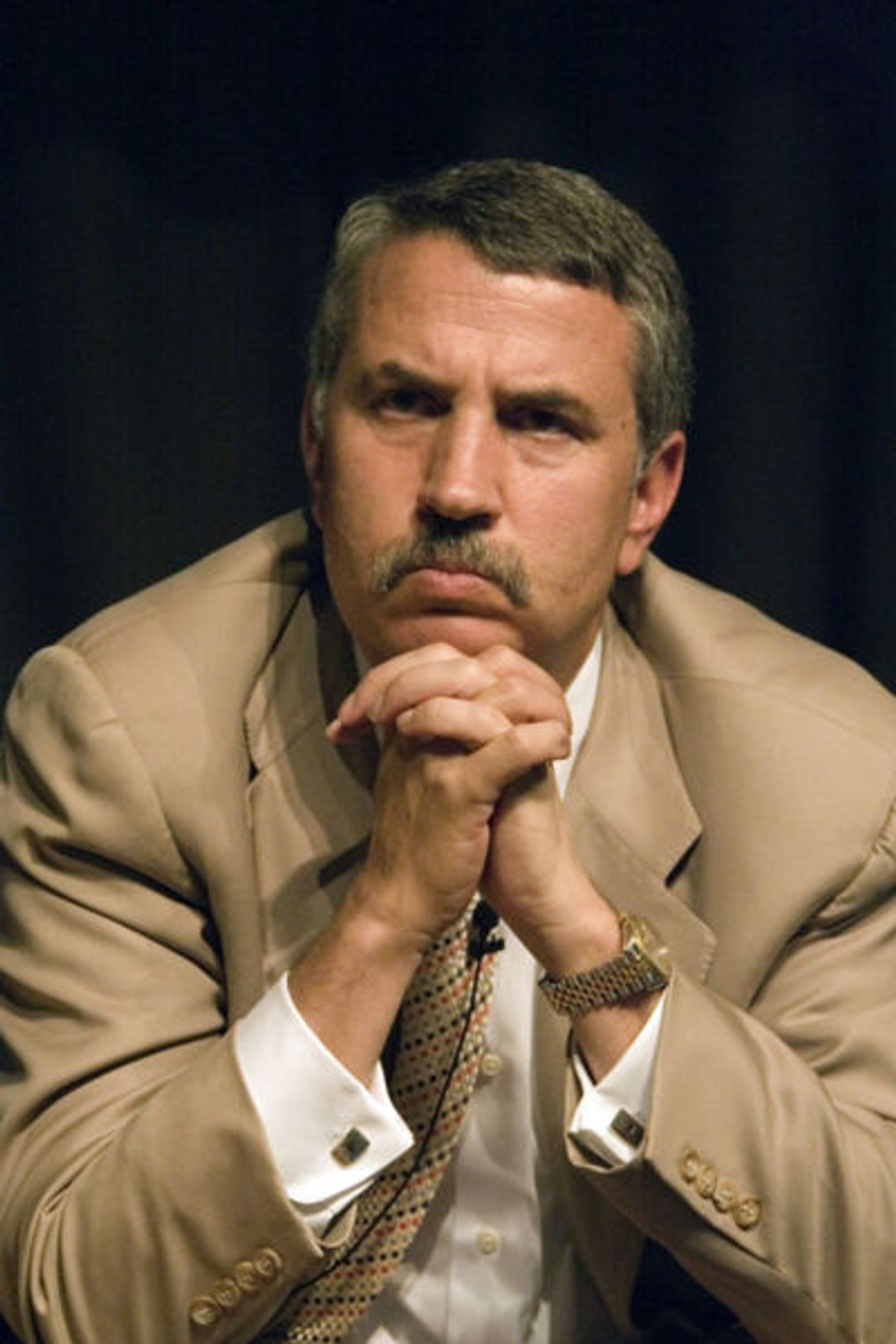 Tom Friedman's column in Wednesday's New York Times raises a fascinating question: Does he even follow the news?

The Cliff's Notes version of his piece goes something like this: Our excessively partisan leaders in Washington are about to plunge the country into a financial crisis by failing to raise the debt ceiling. Or even worse, they're going to reach an agreement to raise the debt ceiling "without a well-thought-out plan and with hasty cuts." If only there was a real leader in Washington, willing to stand up and call for the reasonable and proper solution to this impasse, one that involves making cuts to Social Security and Medicare and increasing revenue:

That is why we need to raise new tax revenues as well — so we can simultaneously shrink the entitlements programs, but still keep them viable, and generate the funds needed to strengthen all five parts of our growth formula. Anyone who says that either entitlement reform or tax increases are off the table does not have a plan for sustaining American greatness and passing on the American dream to the next generation.

Perhaps Friedman was away last Friday, when some guy named President Obama explained exactly what he was willing to do in order to raise the debt ceiling:

Essentially what we had offered Speaker Boehner was over a trillion dollars in cuts to discretionary spending, both domestic and defense. We then offered an additional $650 billion in cuts to entitlement programs -- Medicare, Medicaid, Social Security. We believed that it was possible to shape those in a way that preserved the integrity of the system, made them available for the next generation, and did not affect current beneficiaries in an adverse way.

And if that wasn't clear enough, Obama added this:

In other words, the basic contours of Friedman's dream debt ceiling deal -- the one that all of our national leaders are too blinded by ideology and partisanship to see -- are identical to the basic contours of the debt ceiling deal that Obama offered congressional Republicans. And Obama's position likely would have enjoyed significant support (however grudging) from congressional Democrats, as he also noted last Friday:

And to their credit, Nancy Pelosi, Harry Reid, the Democratic leadership, they sure did not like the plan that we are proposing to Boehner, but they were at least willing to engage in a conversation because they understood how important it is for us to actually solve this problem.

But there's not a word in Friedman's column about any of this -- no credit to the president for being willing to endure abuse from many liberals in the name of pursuing a "grand bargain" on revenues and entitlements, and no acknowledgment that this is not just another case of "Washington" being broken. Sure, he does mention that Tea Party intransigence has been a problem and urges "sane Republicans" to stand up to their base. But from reading Friedman's column, you'd think the crisis is equally the making of both parties, and that none of the principals have been willing to bargain in good faith with the other side. This just isn't the case at all.  The reality is that Obama risked alienating a chunk of his own base in order to reach across the aisle and make a deal and Republicans responded by saying no and walking away.

Friedman closes with this:

But if neither Republicans nor Democrats can see that we need a hybrid politics today -- one that requires cutting, taxing and investing as part of a single nation-building strategy (phased in over time) -- then I’ll hope for a third party that does get it and can take us where we need to go.

Because that's what would make all the difference right now -- a brand-new president to come in and ... make pretty much the same offer that Obama has already made (and an offer he was prepared to force a good number of Democrats to accept). We can certainly argue over whether Obama should have put Social Security and Medicare on the table. But you'd think we could all at least agree that he did do it.