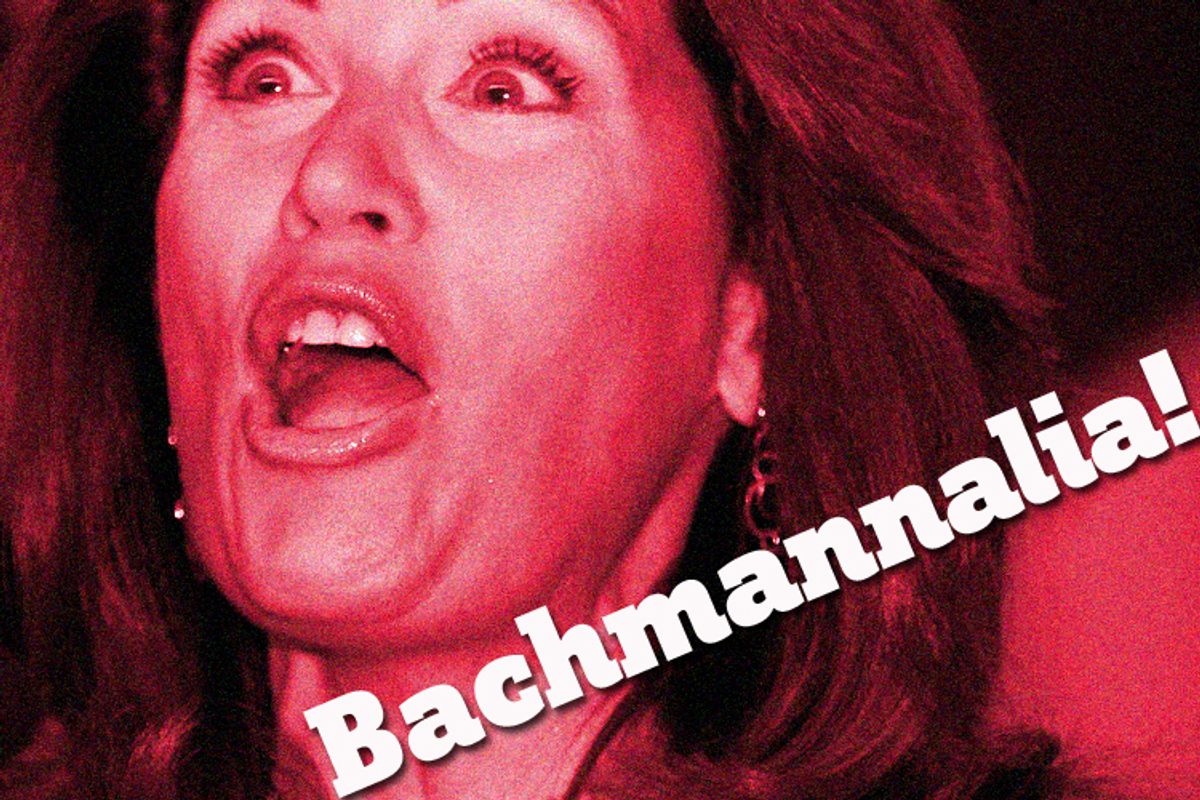 Michele Bachmann has said that the Founding Fathers tried to end slavery; has claimed that John Quincy Adams was among those Founding Fathers; and has confused John Wayne the actor with John Wayne Gacy the notorious serial killer. And those are just her most egregious flubs to date. Bachmann's slip-ups, shocking statements and false historical claims seem to just keep coming. That's why we decided to put them all in one place -- and to keep updating the list with every new bizarre, outrageous or just plain wrong utterance from the White House hopeful. So check back often -- and if you see anything that belongs on this list, send us an email at bachmann@salon.com.

Here is our celebration of Bachmannalia ... so far:

July 27: Speaking in Iowa, she says, "I know you're not used to seeing a president without teleprompters ... But I'm just here to tell you President O'Bach -- President Bachmann will not have teleprompters in the White House."

Yes, flubbed her own name while arguing that teleprompters aren't useful.

July 27: It is reported that in 2010 Bachmann said, "One thing we know about Fannie and Freddie is that they cost the already overburdened and financially strapped taxpayer a pretty penny."

However, as the Washington Post reported, in 2008 the Bachmanns signed for a $417,000 home loan that experts say was backed by Fannie Mae or Freddie Mac (and so was part of the very federal home-loan program she pushed to dismantle that same year).

July 24: Mother Jones reports that Bachmann opposed anti-bullying efforts as a Minnesota state legislator. In 2006 she said: "[T]here have always been bullies, always have been, always will be ... Will it get to the point where we are completely stifling free speech and expression? Will it mean that what form of behavior will there be -- will we be expecting boys to be girls?"

A spate of teen suicides in a school system in Bachmann's district are being linked by teachers, counselors and activists with anti-gay bullying. Efforts to combat the bullying have been obstructed by local Christian groups closely allied to Bachmann, who say anti-bullying proposals are "gay indoctrination."

July 12: Marcus Bachmann, Michele's husband, says that he is not "anti-gay" and that at his Christian therapy clinic (co-owned by Michele) therapists "don't have an agenda or a philosophy of trying to change someone."

Contrary to his claims, testimony of former patients and footage covertly captured from a therapy session proves the clinic has engaged in "reparative therapy" -- using prayer and therapy techniques to try to turn homosexual people straight. Bachmann says she is "very proud" of the clinic.

June 28: Appearing on ABC News, Bachmann tries to defend an earlier claim (see below) that the Founding Fathers fought slavery: "If you look at one of our Founding Fathers, John Quincy Adams, that's absolutely true."

However, John Quincy Adams was certainly no Founding Father: He was the sixth U.S. president who was 9 years old when the Declaration of Independence was signed.  When this was pointed out to Bachmann, she tried to counter: "Well, John Quincy Adams most certainly was a part of the Revolutionary War era. He was a young boy but he was actively involved."

June 27: Speaking from her childhood home of Waterloo, Iowa, Bachmann says, "Well, what I want them to know is just like, John Wayne was from Waterloo, Iowa. That's the kind of spirit that I have too."

As our own Alex Pareene pointed out, however, John Wayne the actor was actually from Winterstet, Iowa, which is 150 miles southwest of Waterloo. Waterloo was the home, for a time, of John Wayne Gacy, the disturbed children's performer who killed 33 people.

March 21: While in New Hampshire, the presidential hopeful says, "What I love about New Hampshire and what we have in common is our extreme love for liberty. You're the state where the shot was heard around the world in Lexington and Concord."

However, the Battles of Lexington and Concord and the shot heard 'round the world took place in Massachusetts, not New Hampshire.  Bachmann took to her Facebook page to address her flub: "So I misplaced the battles Concord and Lexington by saying they were in New Hampshire. It was my mistake, Massachusetts is where they happened. New Hampshire is where they are still proud of it!... And by the way... That will be the last time I borrow President Obama's tele-promoter!"

Jan. 25: In Iowa, discussing the Declaration of Independence, Bachmann says, "We also know that the very founders that wrote those documents worked tirelessly until slavery was no more in the United States."

However, slavery in the United States continued for generations after 1776 and a number of the founding fathers themselves owned slaves -- Thomas Jefferson fathered a child with one of his slaves.