The Republican machine is busy faulting the president in ads and Op-Eds, but the facts tell a different story 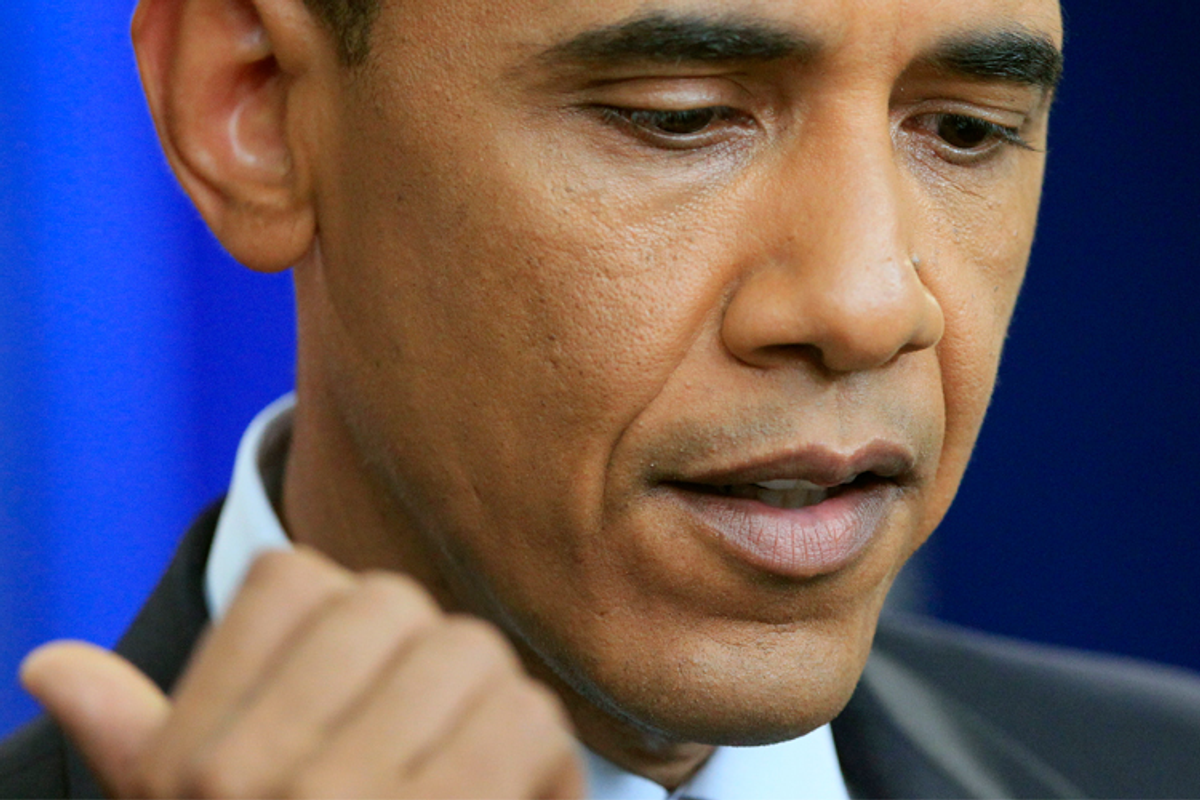 It's 3:01 a.m., and the sexy young woman in the white lace nighty just can't seem to sleep.

She's tossing and turning, worried "about our jobs, our home, even mom's healthcare," according to the saccharine-but-anxious voiceover. She's uneasy about retirement, about how everything costs more, and about her kids -- the two curly-haired wonders there in the photo on the night table.

She supported Obama "because he spoke so beautifully," but now she's disillusioned. Cue the ominous background music. She pushes the covers back, and the camera follows her to the bathroom. "Our country's got this huge debt, and Obama says raise taxes and keep spending more? Doesn't Washington know we can't afford more taxes and debt?" Cut to her shapely, milky white legs as she walks across the bedroom. "If they don't figure it out, it will be even tougher for our kids. There's got to be a way to take away President Obama's blank check."

The ad, airing in key political districts, is convincing, concerning and very easy on the eyes. Funded with millions from Republican strategist Karl Rove's political advocacy group Crossroads GPS, it has a straightforward, populist message: Washington has a runaway spending problem, and Obama is to blame.

It's a message that has cropped up in recent weeks, as the debt ceiling debate pushes the country to the edge of economic abyss. And it seems to justify the Tea Party brinksmanship in Washington, which has threatened to force the country to default on its obligations next week unless Obamacare is rolled back, entitlements are slashed and a multitude of other demands are met.

The trouble is, the message is simply not accurate. It was President George W. Bush who ran up America's debt, by cutting taxes and dramatically growing the size of the government. Obama hasn't solved the problem he inherited. On the contrary, he's added to it, but at a much slower pace than Bush did.

Let's recall that when Bush came to office in 2001, the government's budget was in the black. Washington was actually paying down the national debt. Back then, the Congressional Budget Office projected that America would have amassed a war chest of more than $2 trillion by this year -- money that could be used to strengthen the country or provide for baby boomers' retirement. But the Bush administration, and Karl Rove chief among them, wanted to return that projected surplus back to the people, and especially to the wealthy.

Bush's tax cuts -- along with a rapid increase in defense spending, a prescription drug plan for the elderly and other big-government policies -- saddled the country with some $8 trillion in publicly-held debt by 2009 (the current figure has risen to $10.4 trillion, according to the Washington Post, not including several trillion dollars the government effectively owes itself). A separate analysis by the NY Times tallies Bush's contribution to the debt at $5.07 trillion, and Obama's (including projections through 2017) at $1.44 trillion.

Incidentally, estimates of the stimulus' contribution run between $711 billion (the NY Times) and $830 billion (Congressional Budget Office). While not a small number, it's a fraction of the debt problem, and about half of what the US has spent on wars in Afghanistan and Iraq. Moreover, tarring Obama for spending a fortune to restore the economy conveniently ignores the fact that the Great Recession was hatched on Bush's watch, not Obama's. Likewise, no one bothers to mention that the financial meltdown has forced the government to shell out about $400 billion in unemployment benefits over the past few years -- a problem that Obama clearly inherited.

So the worries of the woman in the ad are misplaced.

But it's not only Karl Rove and the Republican political machine that are blaming Obama for America's economic woes. In the Financial Times, Harvard professor Martin Feldstein slams Obama's policies, and suggests that the administration is to blame for unemployment and much of the debt crisis.

Feldstein wields gravitas as a former chairman of the Council of Economic Advisers. He is also an ideological beacon of the Reagan right. He rejects "the Obama 'stimulus' package" as "too badly designed to add much to national spending" without offering any evidence or analysis. Asked via email to back up his assertion, he told GlobalPost, "There is a very large body of research on the impact of fiscal policies. I think short run increases in government spending have a bigger impact than one time tax cuts."

So was the stimulus really a grand waste of money?

According to figures compiled by the non-partisan Congressional Budget Office, the Recovery Act, as it's known, contributed between 1.5 and 4.2 percent to the country's economy last year. It added 1.3 million to 3.3 million full time jobs as well, shaving unemployment by 0.7 to 1.8 percent. The stimulus has also cut taxes by $260 billion according to the White House, and has invested more than $216 billion in infrastructure, clean energy, research and other economy-building projects. And it has transferred $186 billion to help cash-strapped states retain teachers, provide healthcare to poor children and support other initiatives, according to the Government Accountability Office. Would the country really have been better off without these programs? And would the economy have recovered as much as it has?

Further, in a nod to long-discredited trickle-down theories, Feldstein blames high unemployment on, "Mr. Obama's call for higher taxes [that] discourages spending by business and households." That statement ignores the $425 billion in tax cuts that Obama has already signed into law -- most recently in December 2010.

Of all the policies that have added to America's debt, the Bush tax cuts are the single largest contributor, according to the Pew Fiscal Analysis Initiative. Looked at from another angle, unless lawmakers raise taxes on the wealthy, there's no choice but to borrow more (which is clearly not popular) or to cut entitlements such as Medicare, Medicaid or Social Security. Many economists (Feldstein included) agree that to get the US economy moving again, people and businesses need to spend more money. The question is, who's more likely to do that, a senior citizen who needs every dollar in her paycheck to make ends meet, or a family that already earns more than $250,000 a year?

Nor is it clear that more tax cutting would help business. US corporations are already sitting on some $2 trillion in cash, according to the Federal Reserve. Relative to the size of their assets, that's a bigger pile of cash than they've held any time since 1959. Could it really be that the threat of higher taxes on hedge fund managers and other top earners are what's keeping that money on the sidelines?

For another take on what ails America, check out this opinion piece by GlobalPost's Philip S. Balboni. Here's the money quote on taxes: "The United States is mired in a revenue drought brought on by President George W. Bush and the Republican Congress who engineered two massive income tax cuts, the first in 2001 and the second in 2003. Whatever one's point of view may be about the justification for these tax cuts, it is indisputable that they have added huge new sums to the nation's debt and deficit problem."