As the Tea Party pushes Boehner further to the right, the Dow drops 198 points 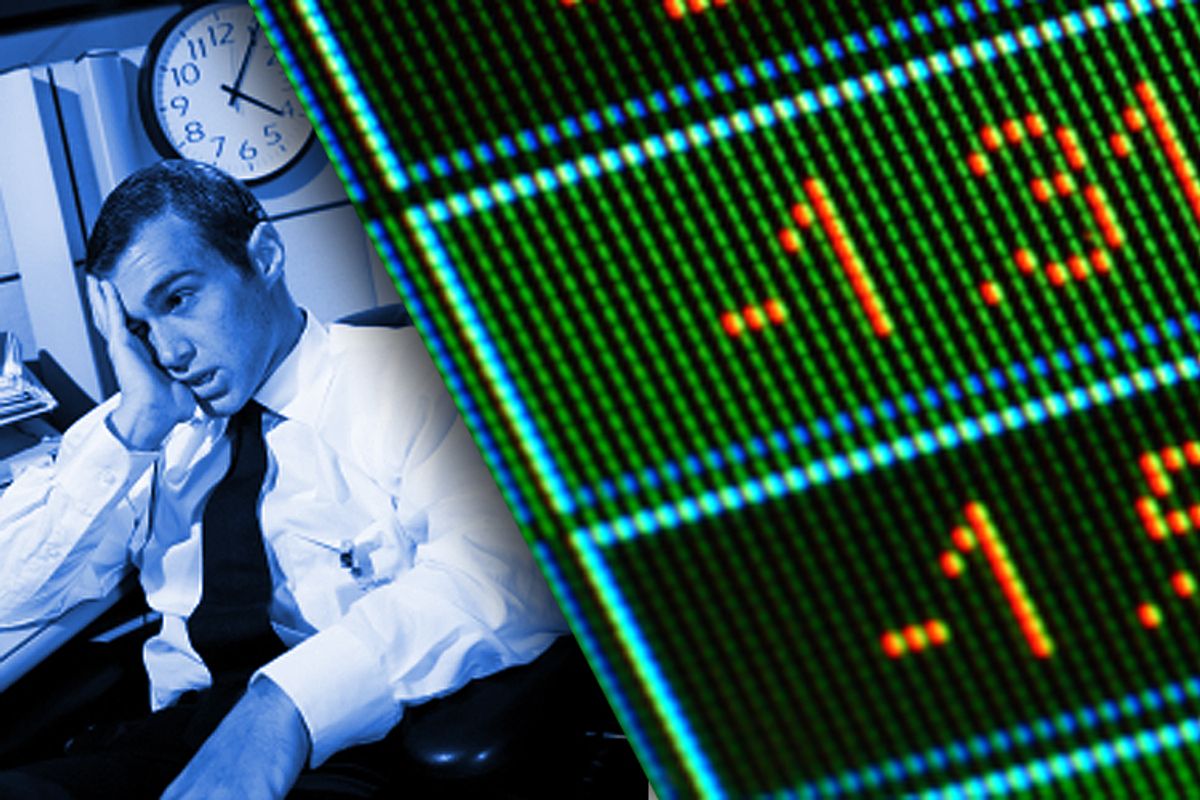 Next, start the blame game.

On the Laura Ingraham radio show Wednesday, House Speaker John Boehner acknowledged that "a lot" of Republican House members "believe that if we get past August the second and we have enough chaos, we could force the Senate and the White House to accept a balanced budget amendment."

Boehner then said that he disagreed with that theory. In his view, "the closer we get to August the second, frankly, the less leverage we have vis a vis our colleagues in the Senate and the White House." But the damage was done. As the news of his comments spread through social networks, the Dow Jones Industrial Average began to fall sharply. It closed down 198 points.

OK, we don't know for sure that traders finally got spooked at this latest proof that  that House conservatives are actively looking forward to debtpocalypse. The steady drumbeat of negative economic data could just as easily be taking its overdue toll? Or maybe it's all the Democrats' fault. Reliable right-wing propagandist Larry Kudlow argued that Harry Reid's attack on the Boehner plan was the real culprit. Nyah nyah nyah.

We have no definitive way to decide the true driver for today's sell-off. But if Wall Street investors are paying close attention to the state of the debt ceiling tug-of-war, then they have good reason to be nervous. Here's why:

The normal way Congress works on a big, controversial piece of legislation is to patch together a last-second compromise after months of huffing and puffing. Reid and Boehner call each other nasty names, and then cut a deal. On the surface, the current deadlock is a perfect setup for just such a denouement. Let's outsource to political scientist Jonathan Bernstein.

The truth is that Boehner's plan is a totally legitimate, if many months late, opening offer. But if he's presenting it to his conference as a done deal -- if he's arguing that if only they vote for this, the Democrats are sure to fold and accept it -- then he's just not telling them the truth. I'm not sure I agree with those who say that Boehner's plan is very similar to Harry Reid's proposal, but I do agree that it's not hard at all to picture a compromise between them. However, it's just not true that the Senate will vote for Boehner; indeed, as of now it looks as if Boehner won't get a single Senate Democrat while losing four or more Senate Republicans. Reid might have 50 votes for his own plan, but probably doesn't have 60. So the two plans, after the votes are taken, are headed for another round of deal-making. Which, of course, is how this stuff is supposed to go.

Except -- what we've just witnessed in the last 48 hours is a conservative rebellion in the House that forced Boehner to rewrite his plan and seek deeper, quicker cuts. The new plan looks likely to pass in Thursday's vote, but anyone watching must appreciate that the Tea Party has just demonstrated its power to push Boehner to the right.

So what are the odds that these folks are going to be willing to suck it up and do the traditional thing and cut a compromise deal that moves to the left at the last minute?

The obvious conclusion to draw from today's events is that the only thing capable of changing minds is chaos. At that point, the pressure on John Boehner to put together a coalition of Democrats and not-Tea Party Republicans who will vote for a compromise that can pass the Senate will be intense. But if he gives in to that pressure, he seems virtually certain to face a leadership challenge that could result in the end of his speakership.

So. The Dow dropped 200 points today, and the real tussle has hardly started. Fun!