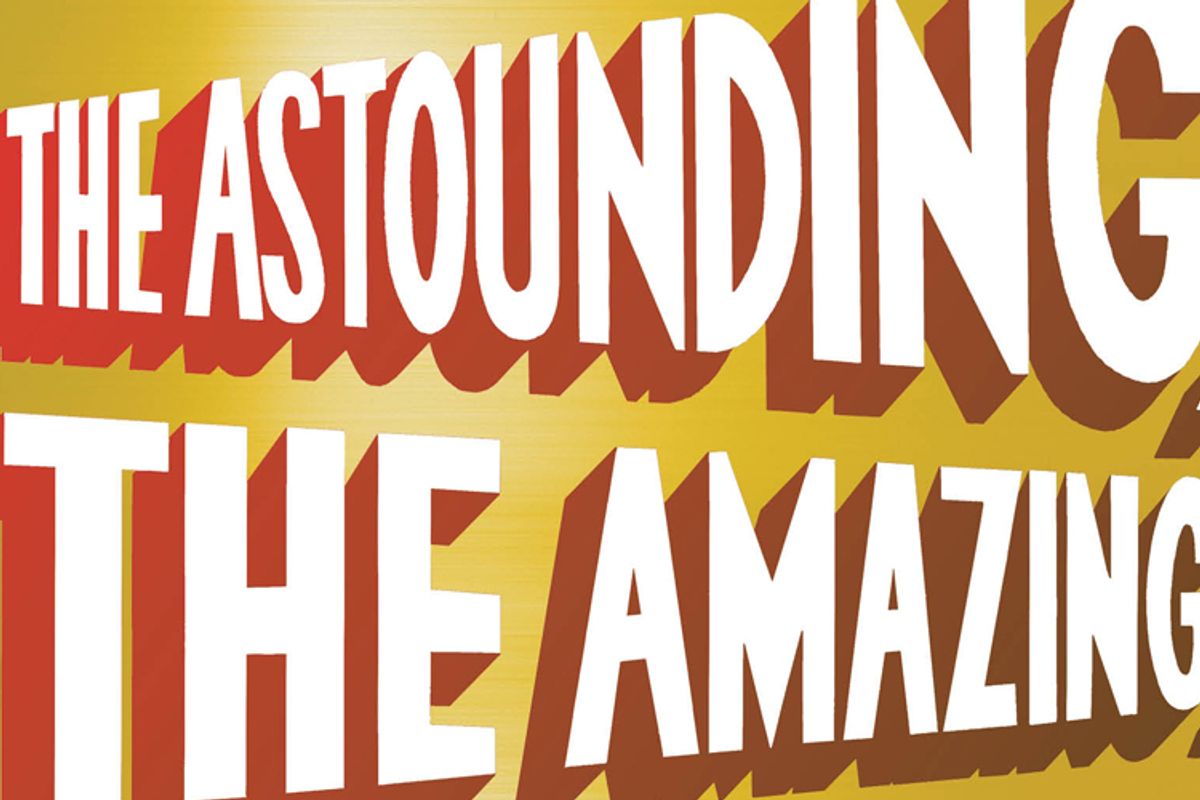 Writers like to write about writers almost as much as moviemakers like to make movies about moviemakers. On second thought, maybe more. Considering only 20th-century books and films, the litany of famous directors who have created cinema about Hollywood is considerably smaller than the catalog of famous writers who have fictionalized fellow scribblers. From Thomases Wolfe and Mann, through Herman Wouk and Philip Roth, down to David Lodge and Jay Parini, authors like nothing better than writing about the glories and sufferings of themselves and their peers.

Many times the author protagonist is an emblematical invention, even if roman à  clef elements might exist. But equally often, and especially of late, the ink-stained hero or heroine of such books is an actual historical personage, shanghaied willy-nilly into the living author's schemes. If Poe or Twain had heirs, there'd be identity-theft lawsuits galore!

Using a famed author as one's protagonist is as enticing as it is problematical. Such figures come with ready-made biographies and fan bases, both of which can aid the living writer in constructing the story and securing a readership. On the other hand, so many ineluctable biographical facts can constrain the imagination. Incorporating ready-made historical quirks and incidents into one's narrative can look like cheating, a default on the fiction writer's primary responsibility to invent. And any perceived inability to capture the subject's definitive personality and charisma can turn off readers as well.

I speak knowledgeably, as an unrepentant, veteran committer of such literary sins. My story collection "Lost Pages" features over a dozen tales starring such writers as Robert Heinlein, Thomas Pynchon, Franz Kafka and Philip K. Dick. Additionally, I've employed Albert Camus, Robert Frost, Emily Dickinson and Walt Whitman in other outings. The creation of new adventures for beloved scribes is a dicey business, but incredible, invigorating fun when you can bring it off. At least it feels like that from my self-centered writerly perspective -- and also, I hope, from the viewpoint of like-minded readers.

Novelist Paul Malmont boldly and outrageously doubled down on the whole author-as-protagonist gamble with his 2006 adventure "The Chinatown Death Cloud Peril." Not only did Malmont daringly feature an entire salon's worth of real authors as his troupe, he set his tale in the pulp era, circa 1938, that Golden Age of Magazines when fiction writers were arguably more respected and democratically influential than they ever were before or since. His novel managed to be both a total immersion in the pulp-writer lifestyle, objectively viewed, and a thrilling adventure of the sort commonly produced by those folks. (Malmont's wild-eyed scenario involved poison gas, revenants, and a wily Oriental Menace, to name a few aspects.)

The story's main heroes were Walter Gibson, creator of the Shadow; Lester Dent, Doc Savage's amanuensis; and L. Ron Hubbard, of later Scientology infamy, but in the late-Depression year of our story merely a brash and upcoming pulpster. Along with these mainstays we also encountered such figures as H. P. Lovecraft, John W. Campbell, Robert Heinlein, and, briefly, Siegel and Shuster peddling their crazy "Superman" property, a cameo appearance that instantly reminds us of Michael Chabon's allied outing in "The Amazing Adventures of Kavalier & Clay."

The style of Malmont's writing is, by turns analytical, journalistic, affectionate, elegiac, philosophical, and, well, pulpish. He reconstructs his characters and their era with historical fidelity and empathy without feeling chained to total textbook accuracy. The rivalry between Gibson and Dent comes off as highly believable, as do Hubbard's outsize ambitions. Likewise, Dent's passion for his wife, Norma, and Gibson's wavering love affair with magician's assistant Litzka provide plenty of authentic romance. Malmont blends this verisimilitude with outlandish blood-and-thunder action, thus illustrating his central conundrum: "Where does pulp end and reality begin?" Taken all in all, the book delivers both thrills and meditative reflections on the writerly condition.

He is not, of course, the first author to utilize elements of this particular cast and era. Notably, Richard Lupoff gave HPL an outing in "Lovecraft's Book," and David Barbour and Richard Raleigh sent both Lovecraft and Robert E. Howard afield in "Shadows Bend." But Malmont trumps his predecessors by the intensity of his novel's immersion in the pulpster milieu, and possibly in sheer storytelling virtues as well.

Malmont's new "The Astounding, the Amazing, and the Unknown" (its title harking back to three SF magazines of the era) leaps ahead a few years after the "amazing adventures of Gibson & Dent" to the middle of World War II and the venue of the Philadelphia Naval Yards, where several conscripted SF authors are at work for the military: Robert Heinlein, Isaac Asimov and L. Sprague de Camp. This historical nexus is well known to many fans of the genre, and Malmont's choice was anticipated in "Green Fire," a similarly premised novella co-authored by Eileen Gunn, Michael Swanwick, Pat Murphy, and Andy Duncan. Can Malmont bring new verve and insights to the scene?

We begin with a framing story, as physicist Richard Feynman and friends are being feted, postwar, on Long Island. Prompted, Feynman launches into the account of these 1943 adventures, asking his listeners, in a phrase that parallels the prior book's enigma, to determine "where the science ends and the science fiction begins."

The cast is introduced through the lens of their most personal relationships. Pedantic and jokerish young Isaac Asimov and his new bride, Gertrude, are experiencing marital troubles, partly due to her parochial loneliness and lack of sophistication. Confident Bob Heinlein, in charge of this R&D gang of scribes, is cosseting his mentally disturbed wife, Leslyn. Only elegant L. Sprague de Camp and his beautiful spouse, Catherine, seem at ease. Together, the men enthuse about science fiction, dishing dirt on their peers, dreaming of the fabulous stories they will write, and trying to apply the ethos and technics of SF to the war effort.

This sequel is more naturalistic than its predecessor, with interpersonal drama coming to the fore, as if to reflect the changing zeitgeist. None of the writers emerge as caricatures of their public personas, but as earnest, breathing men and women. Malmont plainly has a blast re-creating this dangerous, promising era and putting its inhabitants through their larger-than-life paces.

But for all of Malmont's scrupulous research and loving devotion to period detail, he makes one grievous error of speech, and not to mention it would invalidate my praise of his authenticity. He has our authors toss around the term "sci-fi," which, alas, was not coined and popularized until the late 1950s, by master fan Forrest J. Ackerman. Putting it in the mouths of Heinlein and Asimov in 1943 is one of the more incredible features of an outlandish pulp plot.

The most fascinating thing about this book, once we applaud its vigorous storytelling and historical acumen, is its publication by Simon & Schuster as a non-genre release of distinction, rather than within as a science fiction novel per se. When the protagonists begin debating the obscure controversies among the Futurians -- a fan group that included Asimov and Damon Knight among many other notables -- I experienced a surreal moment of deracination. Even 20 or 30 years ago, such material would have been relegated to the pages of fanzines or novels from specialty small presses. Now it's mainstream. Has the geekification of the planet actually progressed to this incredible point?

Or is Malmont simply honoring the dream of science fiction's potency, as articulated by Heinlein in "Issue 1, Episode 6" of the novel?

An incredible future is just waiting for us; about to unfold. Everyone feels it. I think what we do as writers is lay out a conceptual framework for people who want to build that bridge to tomorrow... I think what we're doing is helping inspire and guide people past the perils and pitfalls to a better day.

If Asimov and Heinlein and their peers are truly among the 21st century's Founding Fathers, then Malmont is their Ken Burns.