Despite the rising cost of fuel, ticket costs are down over the last decade. Plus: American goes shopping 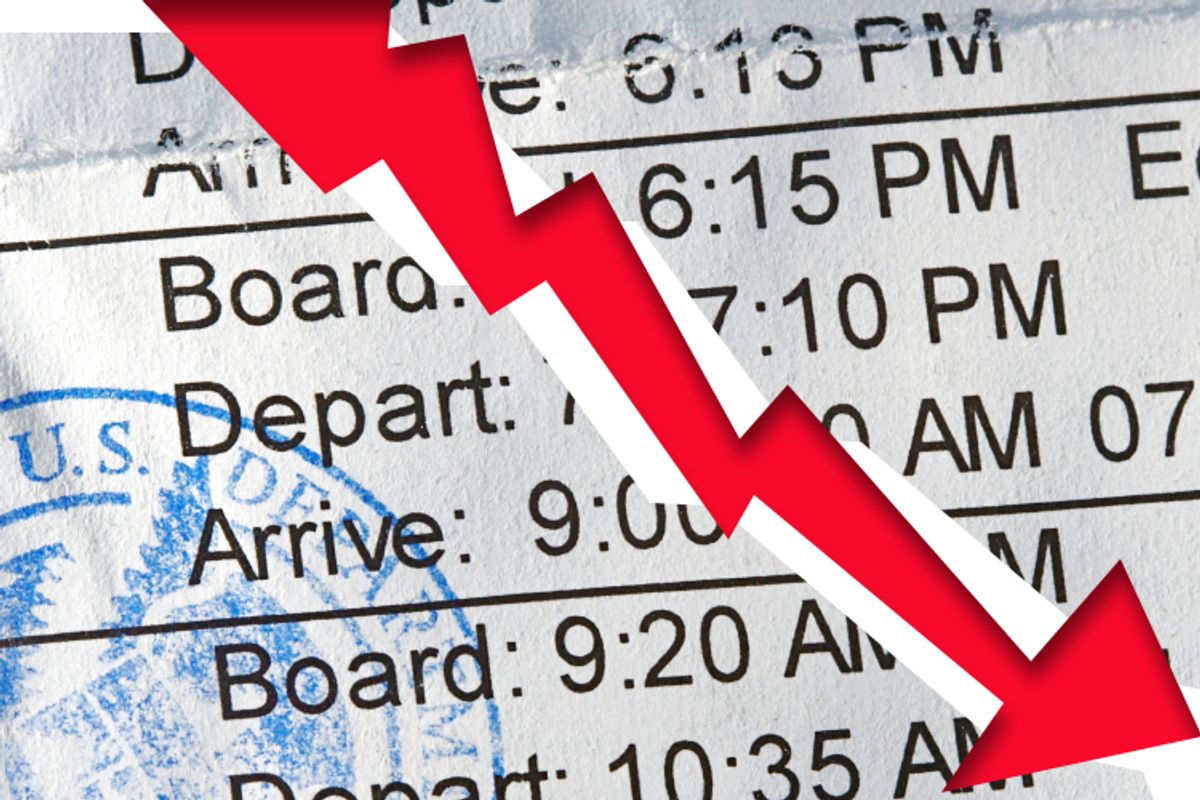 That's the number of new airplanes ordered last week by American Airlines. Beginning in 2013, in a deal worth up to $40 billion, American will take delivery of 200 Boeing 737s and 260 Airbus A320s -- with options for another 460 planes over the coming two decades.

According to American, the deliveries will "pave the way for American to have the youngest and most fuel-efficient fleet among its U.S. airline peers."

The average age of AA's planes is 15 years. That's roughly on a par with the rest of the U.S. legacy carriers -- though substantially older than the typical fleet overseas. A younger fleet is always more desirable than an older one, I suppose, but as discussed in this column before, efficiency and amenities are the drivers here, not safety.  Fifteen might sound old for an airplane -- few people hold onto their cars for anywhere close to that long -- but remember that planes are built to last more or less indefinitely, provided they are maintained, inspected and upgraded in accordance with programs laid out by the manufacturer and regulators.

And those A320s, incidentally, bring American back into the Airbus fold after a temporary hiatus. The carrier has been one of the few global majors operating without a single Airbus-built plane on its roster. It sold off its remaining A300s a couple of years ago and has relied on a fleet of Boeings (737, 757, 767, 777) and McDonnell Douglas MD-80s.

Supposedly this is the largest commercial aircraft order in history.

It is also, in my pouty opinion, one of the least exciting. Perhaps it's the little kid in me, but somehow a giant order consisting entirely of the industry's most aesthetically boring,  single-aisle narrow-body planes just doesn't bowl me over -- especially when airlines elsewhere in the world are wowing us with their 777s, 747s and 787s.

Eventually, all of the U.S. mainstays (United/Continental, Delta and American) are going to be looking at large-scale replacement of their long-haul fleets if they hope to remain competitive against their Asian and European counterparts.

Of course, people don't necessarily care what model of plane they're flying on, so long as it's reasonably clean and comfortable. What they care about, mostly, is getting a good deal on their ticket. Which brings us to an additional number, courtesy of the Bureau of Transportation Statistics.

That number is 21 percent. In 2010 -- the last year for which complete data is available -- the average airfare, adjusted for inflation, was down 21 percent compared to 2001.

Jet fuel prices have gone up an average of 10 percent annually over the past decade. Per-barrel oil prices were about $30 in 2001, increasing to around $125 by 2011, overtaking labor as the industry's single biggest operating expense. Still, fares fell.

2010 was a slightly more expensive year than 2009, and 2011 is trending that way too, but graphs show an overall steady decline in ticket prices over the past 10 years. Think about how remarkable that is in light of two things:

2. The industry's bottom line over that same span -- one punctuated by record losses and multiple bankruptcies. Airlines are yet to perfect a business model that keeps them from pricing themselves out of business.

One way they've stayed afloat is through their reliance on the regional sector. A lot of the flying that was once performed by mainline carriers themselves has been farmed out to their regional affiliates -- those Connection and Express operators, whose costs are lower. Measured by the number of arrivals and departures, regional flying has more than tripled since 2001, with capacity at least doubling. Regional planes now account for half of all commercial flights in this country.

And the average trip lengths for these planes have grown by a startling 60 percent. In the old days, "commuter planes," as we called them, ferried passengers from small, outlying cities into major hubs, and the big airlines took it from there. Today, you can hop a 70-seater from New York to Chicago; Denver to Dallas.

More and more people are flying than ever before, and, oddly enough, they're doing so aboard smaller and smaller planes. On the one hand this has helped keep fares down and vastly increased the number of departure options available to travelers. On the other hand, it's an inefficient use of air and ground space, and thus a prime contributor to the airport congestion that leads to paralyzing delays. The system works reasonably well, until a thunderstorm comes rolling through or it starts to snow.