Dozens dead after massive rainfall in and around Seoul 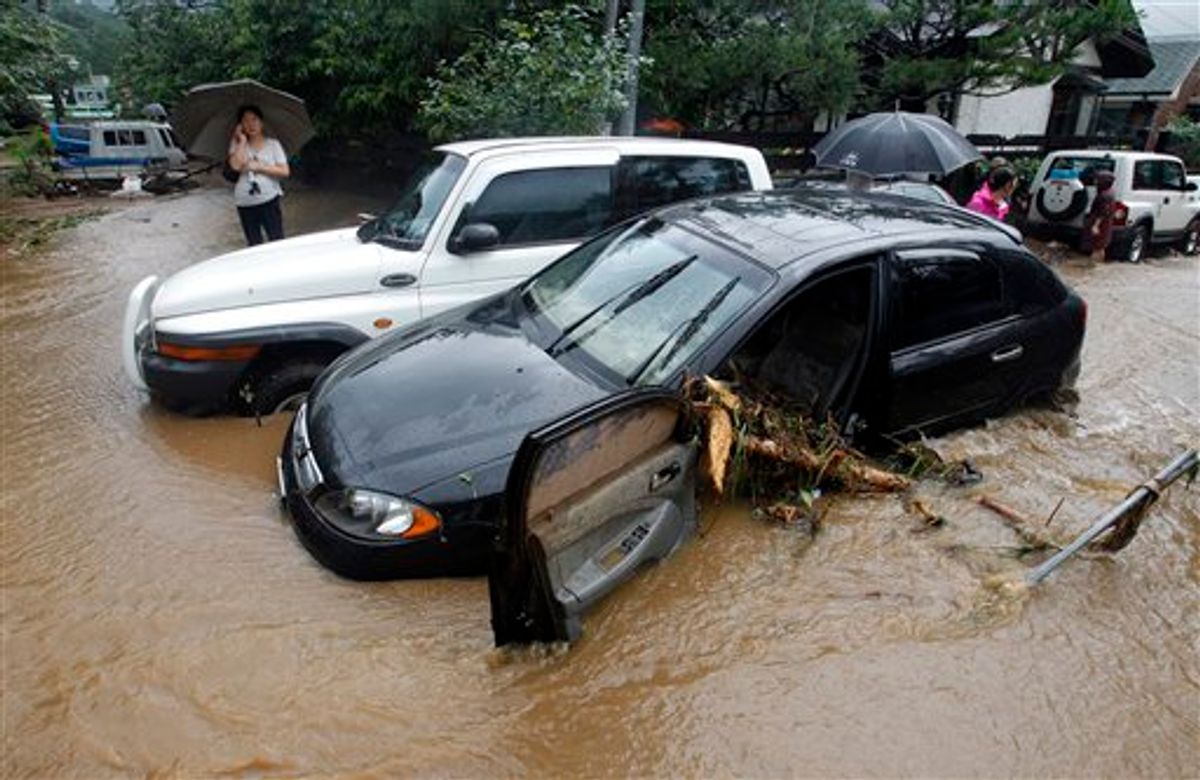 Thousands of rescuers dug through thick mud for survivors of deadly landslides and flooding as South Korea's military warned Thursday that buried land mines may have slid down mountains weakened by rain.

Massive rainfall in Seoul and surrounding areas since Tuesday has killed at least 47 people, and another four were missing. The rain stopped or decreased Thursday, but more was forecast until Friday morning.

At a mountain where a deadly slide hit Wednesday, digging for missing people was halted Thursday until the rain stopped because the Defense Ministry said mines placed there in the 1960s could have shifted. Soldiers with metal detectors were waiting to search for the mines, said Yoon Yong-sam, a spokesman for the air force, which planted the land mines around an air defense base on the mountain.

A defense ministry official said earlier that 10 mines could have been pushed down Wumyeon Mountain. The official declined to be named because of policy. Another ministry official, spokesman Kim Min-seok, played down the immediate risk because a concrete wall on the hillside could be stopping the mines from reaching rescue workers.

South Korea's military dug up many land mines on the mountain between 1999 and 2006, but about 10 couldn't be accounted for, officials said. Fences around the base have warnings about unaccounted land mines.

There were also fears of land mines in northern provinces also hit by flooding and slides, prompting the Joint Chiefs of Staff to order mine-search operations where needed.

The landslide Wednesday in southern Seoul killed at least 16 people. About 5,000 firefighters, soldiers, police officers and others mobilized Thursday to try to find any survivors and clean walls of mud piled in residential areas near the base of the mountain, emergency official Kim Wu-min said.

Bae Jin-sun, a 27-year-old who works in southern Seoul, said she was worried about the safety of rescue workers near the mountain.

"There is still the possibility of a land mine falling through the cracks," she said.

Footage by YTN television network showed excavators removing a mass of mud and fallen tree parts and rescuers in raincoats shoveling up the dirt piled up near an apartment. Uniformed soldiers and firefighters wearing cotton gloves used their hands to pull out rocks and tree branches from the mud.

Another landslide early Wednesday killed 10 college students sleeping in a resort cabin in Chuncheon, north of Seoul. The students from Inha University in Incheon, just west of Seoul, were volunteering at a local elementary school.

The National Emergency Management Agency reported 18 more deaths because of a stream flooding and landslides elsewhere in towns near Seoul. No deaths of foreigners have been reported.

The rainfall left almost 5,000 people homeless, flooded about 1,380 houses and caused power outages at more than 125,000 homes throughout the country, the National Emergency Management Agency said in a statement Thursday.

The 17 inches (440 millimeters) of rain that fell on Seoul on Tuesday and Wednesday was about 15 times more than the average two-day rainfall at this time of year, according to the state-run Korea Meteorological Administration.

Associated Press writer So Yeon Kwon contributed to this report from Seoul.