And if the Democrats cave one final time ...

With the GOP holding a hostage, President Obama's bottom-line debt ceiling demands may not mean much 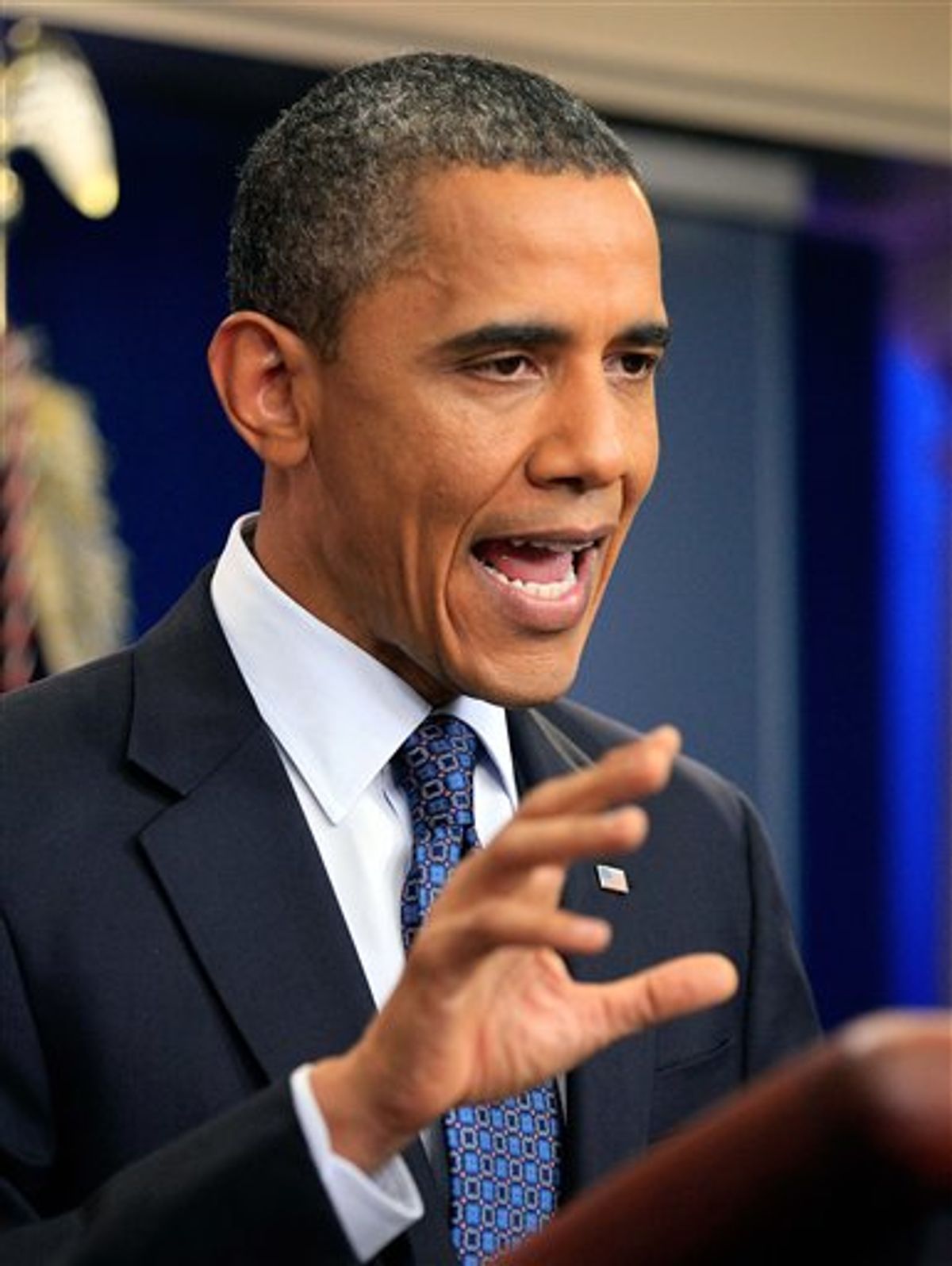 President Barack Obama makes a statement in the Brady Briefing Room at the White House in Washington, Friday, July 22, 2011 on the break down of debt ceiling talks. (AP Photo/Manuel Balce Ceneta) (AP)
--

Right now, President Obama is vowing to veto the debt ceiling plan that John Boehner hopes to push through the House this evening. And Harry Reid has made it clear that the Boehner proposal, as currently constituted, has no chance of clearing the Senate.

But it's actually not that hard to imagine Obama and Reid changing their tunes in the end and giving Boehner just about all of what he wants. Why?

For one thing, it's important to understand how helpful Obama's and Reid's current postures are to Boehner, who will face a mutiny from his Republican colleagues -- against his debt ceiling bill and potentially against him personally -- if he's perceived as compromising with the Democrats. Remember: Boehner was previously offered a "grand bargain" by Obama that would have marked a major step forward for Tea Party economics, but it had Obama's fingerprints on it, which made it an impossible sell to dozens of House Republicans. So to have any chance of pushing his own scaled-down plan through now, Boehner has had to frame it as the Democrats' Worst Nightmare. The comments from the White House and Reid this week have helped him in that cause, allowing Boehner (for instance) to take to Laura Ingraham's radio show on Wednesday and boast: "Barack Obama hates it, Harry Reid hates it, Nancy Pelosi hates it."

The reality, though, is that Boehner's plan really isn't radically different from the one that Harry Reid has proposed, and that Obama has endorsed. The biggest difference is that Reid's would extend the debt ceiling until after the 2012 election, while Boehner's would have the issue return in early '12 -- during the campaign. This raises a question: Just how important is it to Obama -- and Democrats -- that we not have another situation like this before the '12 election?

From a policy standpoint, obviously, it would be preferable for Obama (and, really, everyone) to push out an extension as far as possible. The inherent absurdity of the debt ceiling is well-documented, so the less it interferes with the political process, the better. And politically, it's certainly understandable why Obama would want to put off another vote until after the '12 election. Sure, polls show that he's come off better than the GOP in this showdown, but his overall approval rating hasn't gone up; if anything, it's dropped slightly. All things considered, a debt ceiling showdown in the middle of the '12 campaign would represent a time-consuming distraction that Obama is probably better off not risking.

But what if he is forced to choose between Boehner's plan (or something close to it) and a default? It could easily come to that.

If Boehner is able to push his plan through the House today, Reid is expected to amend it and pass a different version  in the Senate -- one that would extend the debt ceiling past November '12. As Andrew Leonard noted Wednesday, in the pre-Tea Party era, the path would then be clear for a compromise, with the House recognizing that most of its priorities have been preserved and giving a little. But in the Obama age, this may not be how a Republican-controlled House behaves. The Reid plan may be nearly identical to Boehner's, but Tea Party true believers in the House may instead regard it as a step too far toward compromise with the Democrats. Simply selling them on his plan as an alternative to their doomed "Cut, Cap and Balance" legislation has already been a Herculean task for Boehner. Would he really be able to get them to give in even more?

If it comes to that -- a Tea Party-fueled House rebellion against compromise with Reid -- then Obama and the Democrats will be faced with a practical choice. Yes, they've called the Boehner plan unacceptable and railed against the idea of going through another debt ceiling showdown nine months from now. But if we're up against the Aug. 2 deadline and it really looks like that's the best plan that could possibly clear the House, then Obama will have three options: 1) Stand his ground as the country defaults; 2) Invoke the 14th Amendment and ignore the debt ceiling, prompting a months-long legal fight; or 3) Agree to terms that are basically identical to Reid's but that include some kind of debt ceiling vote during the '12 race.

In that scenario, Option No. 3 might be the most reasonable for Obama. After all, if another debt ceiling battle in early '12 would be an iffy political proposition for him, the same is probably true for Republicans. As a matter of fact, I can think of one Republican who surely dreads this scenario: Mitt Romney, the party's (sort of) presidential front-runner, who has taken pains these past few weeks to avoid saying anything meaningful at all about the debt ceiling showdown. At this early point in the campaign, Romney can more or less get away with this. But if he's the presumptive nominee next April and we go through all of this again, he'll be in a far less comfortable position.

I talked about Romney and his silence on the debt ceiling on MSNBC with Al Sharpton and Slate's David Weigel Wednesday night: