When you can see a crisis coming, you can find a way to profit: Buy low, sell high 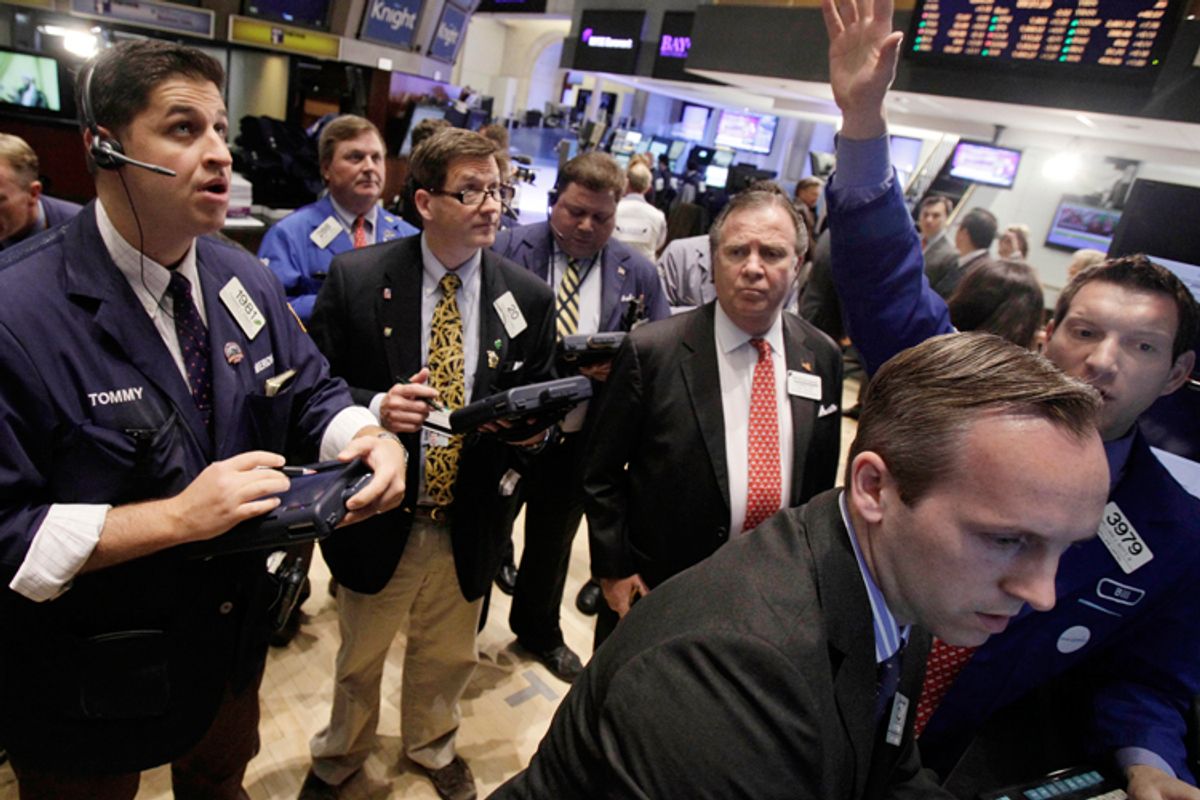 Traders on the floor of the New York Stock Exchange.
--

This is just embarrassing.

Investors were paying more Wednesday to insure against a loss on U.S. debt than they were to hedge against a default by Turkey, Thailand, the Philippines or the Slovak Republic. The cost was about four times the price for British debt, almost twice the price for Russian debt, and more than double the price for IOUs issued by Panama.

Credit swap gamblers are speculating that the the greatest superpower and biggest economy is more likely to default on its debt than the Philippines. That's impressive.

The surreal nature of the debt ceiling crisis gets more stark by the day, if not the hour. As we hurtle closer and closer to the deadline, no one knows exactly what will happen, but everybody knows something really bad could happen. This is entirely unlike most previous economic crises -- either those that brewed slowly, like oil-shock induced recessions, or those that came fast -- like the post-Lehman Brothers collapse. It's hard to think of anything historically similar: a crisis that is entirely in our power to avoid, but might happen anyway, due to phenomenal political dysfunction. If there's any good news, it's that wiser heads have some time to prepare, but that's small solace.

On Wednesday, the U.S. stock market signaled more nervousness than usual, but on Thursday morning, complacency was back in style. Hard to know what to make of that, since it seems unlikely that investors think the probable passage of the Boehner bill in the House this evening would presage an end to the crisis. Yes, there's already plenty of crowing in right-wing circles, where there seems to be widespread belief that a successful vote on the Boehner bill means total victory for Republicans. But does it really?

Senate Democrats have already promised to vote against the Boehner bill and the White House has threatened to veto it. (The latest from White House press secretary Jay Carney: "It ain't going anywhere in the United States Senate.") The most likely scenario still seems to be a deadlock between the House and the Senate, followed by a market downturn, followed by a "compromise" that is acceptable to enough House Democrats to win passage even without conservative Republicans. There will be plenty of drama, but ultimately a resolution that doesn't force the U.S. government to start missing its bills.

That, at least, is the conventional wisdom. And you can see it reflected in the comments of some investors, who are waiting for this whole scenario to play out so they can make a killing buying cheap when asset prices drop.

"The equity market's sell-off is clearly a reaction to the intractability of Congress and the president," said Jack Ablin, chief investment officer at Harris Private Bank. "It's clearly frustrating investors worldwide but is ultimately a buying opportunity as this is a contrived crisis."

And there you have perhaps the most cynical way to frame the debt ceiling mess. No matter what compromise finally emerges, it won't address the current needs of the economy -- quite the opposite, as both the Reid and Boehner plan now include front-loaded cuts that are exactly what a slumping economy doesn't need. There's also a very real chance that a failure to make any significant long-term commitment to deficit reduction through a mix of cuts and revenue increases will result in a credit downgrade.

But investors who keep their heads -- who wait for an entirely "contrived" panic and swoop in to buy when prices drop -- will do great. Because if you've got cash to play with, and you see a disaster coming, you can always find a way to profit. America, the beautiful.