GOP nightmare: No vote on the Boehner bill

The debt ceiling follies continue, as House conservatives fail to rally behind their Speaker 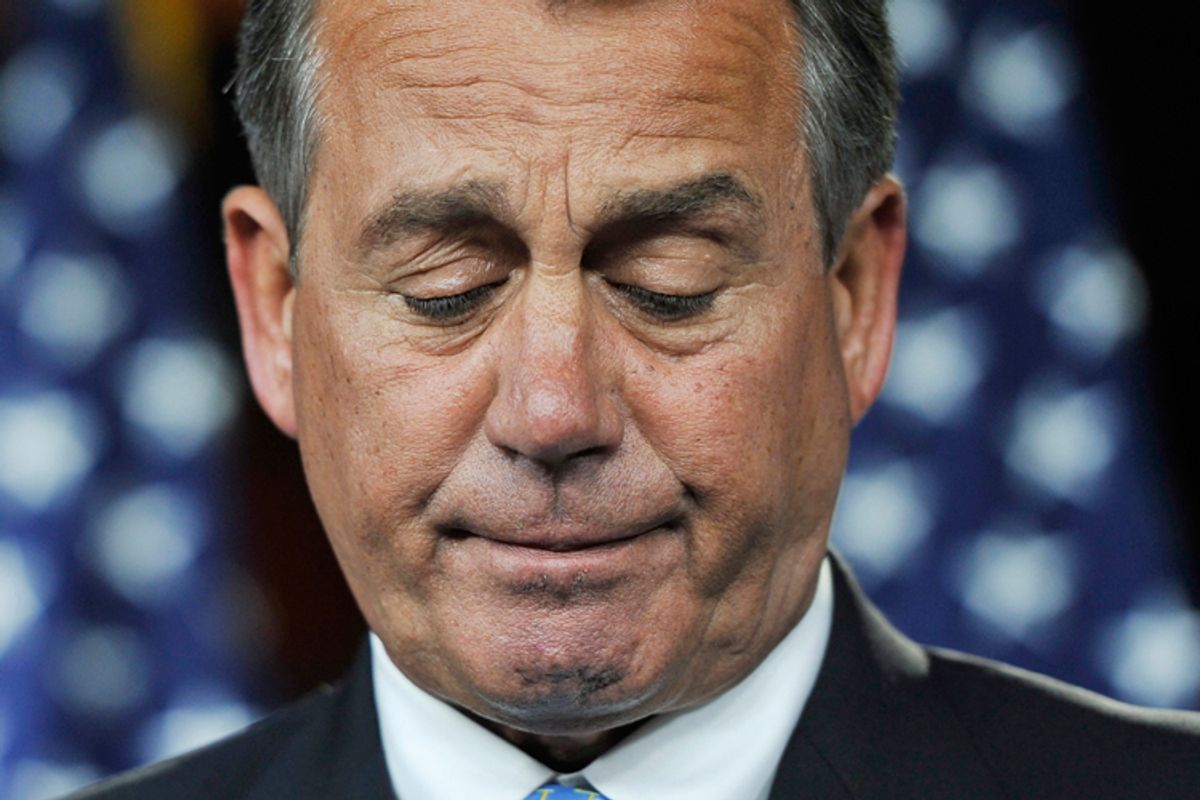 (THIS STORY HAS BEEN UPDATED)

As I write these words, the U.S. House of Representatives is debating the appropriate name for a post office in Pasadena, Calif. Meanwhile, C-SPAN is running a crawl at the bottom of the screen that reads "Final Vote on Speaker Boehner's Plan to Raise Debt Ceiling Postponed."

And so, ludicrously, is history made. The Republican Party is on the cusp of one of the greatest self-inflicted disasters since a crack cadre of two-bit bumblers broke into the Watergate Hotel. Early Thursday evening, John Boehner could not count on enough Republican votes to pass his own debt ceiling bill. Tweets from news reporters at the Capitol reported that the speaker was summoning recalcitrant representatives to his office and presumably using every means at his disposal to switch their votes from no to yes, but on Thursday he failed.

The House Rules Committee will meet Friday morning to consider "tweaks" to the bill that might make it more palatable to conservatives. But even if a new bill passes, instransigent House Republicans are still doing their best to hand  President Obama one of the biggest victories of his term.

Here's why: The Boehner bill is already a conservative bill that won't pass the Senate. Making it more conservative only reduces its viability. House Republicans are doing their absolute best to demonstrate that they are incapable of supporting any kind of compromise deal acceptable to both parties. They are effectively declaring themselves incapable of governing.

The longer they play this game, the more political cover President Obama gets for truly dramatic action, such as declaring the debt ceiling unconstitutional under the grounds of the 14th Amendment, or simple "necessities of state." If the House can't pass the speaker's own bill, with the entire nation (and the world) watching, with Wall Street on edge, and most amazingly of all, already having secured a deal that includes significant spending cuts without any revenue increases, House Republicans will be exposed as both irresponsible and incompetent.

This kind of thing just doesn't happen. It is very very rare for the majority party to bring a major bill to the floor without knowing how the votes will go down. The last time, in fact, is seared into our cultural memory: the failed vote on TARP that set off a major market meltdown.

But that wasn't Speaker Pelosi's fault. On that infamous day, John Boehner failed to deliver his caucus. If history repeats itself, Washington will be a different town, and Boehner will be a neutered political leader. And those of us who lived through this period will wonder how in the world this man managed to hold the U.S. government hostage for so long, when he couldn't even control his own party.