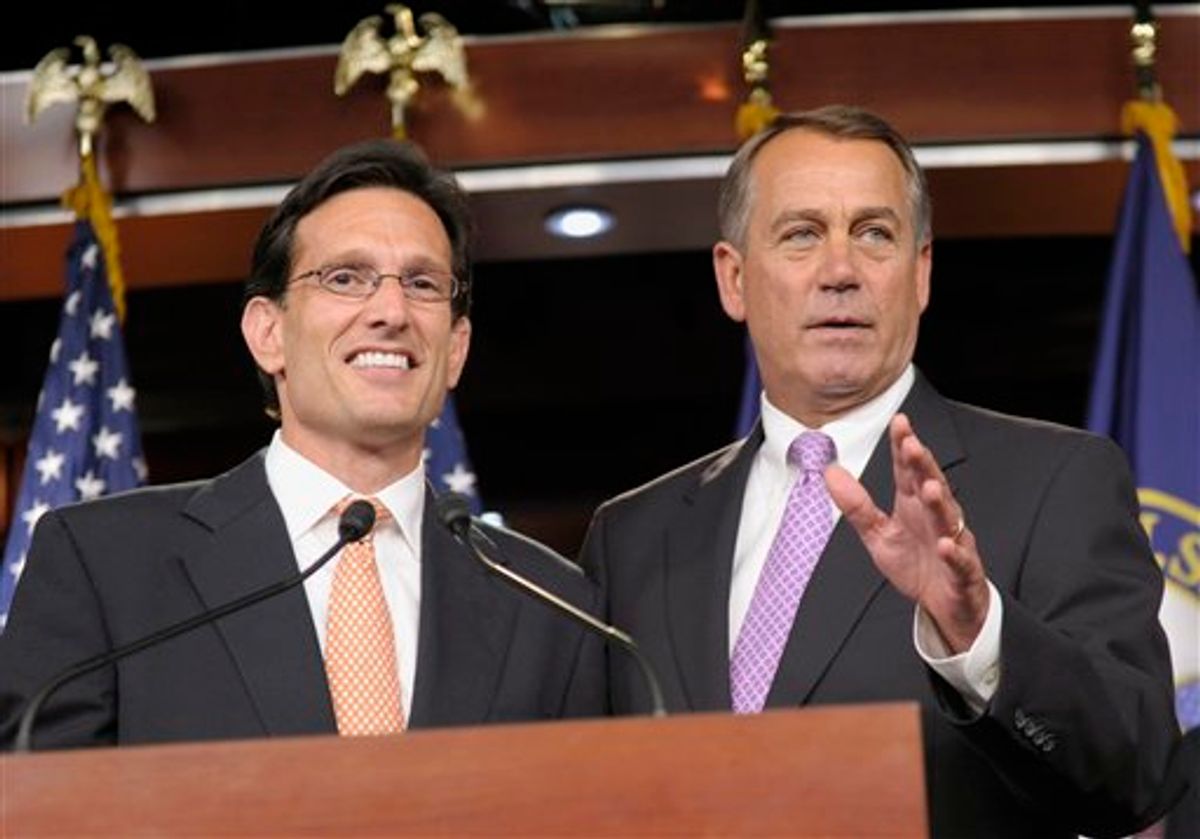 As I write, it's impossible to guess how the latest made-for-TV partisan crisis in Washington will end. We've reached the point where the president of the United States felt he needed to deliver a prime-time speech essentially defending the post-Enlightenment values of reason, evidence and compromise against an obscurantist movement more like a religious cult than a political party.

But has President Obama got the guts to deal with the reality facing him? Signs are not encouraging. The standoff has two major components: the adolescent nihilism of the Republican right, and the intellectual sloth of the American people. It's unclear that Obama has the political courage to confront the first, while the White House has scarcely made a serious effort to inform the public what's at stake, and why.

Hence the pleading tone of Monday's speech, which makes sense only if Obama's ultimately willing to use the extraordinary powers of the presidency to end this Tea Party hostage drama on his terms.

"is no way to run the greatest country on Earth. It is a dangerous game we've never played before, and we can't afford to play it now. Not when the jobs and livelihoods of so many families are at stake. We can't allow the American people to become collateral damage to Washington's political warfare."

Good questions. The problem's what got lost in the shuffle:

"Understand -- raising the debt ceiling does not allow Congress to spend more money. It simply gives our country the ability to pay the bills that Congress has already racked up."

Unfortunately, people either don't understand that or refuse to believe it. Republicans are doing everything possible to conceal the truth, while the White House has been their unwitting ally.

Mr. President, this ain't Harvard Law Review, where everybody's done their homework and honorable colleagues seek reasoned compromise. If you want the great mass of Americans to grasp what's going on, you've got to tell them plainly and repeatedly until they can repeat your message like an ad slogan: "Less filling, tastes great." "Where's the beef?" Like that.

How does "deadbeat Republicans" sound? Because the simple fact is that the GOP under George W. Bush put two wars, a Medicare drug benefit, and tax cuts heavily slanted toward the rich on the national credit card. Now that the bill's due, they're planning to skip town and stick Democrats with the charges.

"In January 2009, just before President Obama took office," explained Teresa Trich, "the budget office projected a $1.2 trillion deficit for 2009 and deficits in subsequent years, based on continuing Mr. Bush's policies and the effects of recession. Mr. Obama's policies in 2009 and 2010, including the stimulus package, added to the deficits in those years but are largely temporary."

So when Speaker Boehner speaks of "the largest spending binge in American history," he's hiding who's responsible. The Obama administration has added a comparative fraction to the National Debt, almost all by necessity. Also due to recession, tax revenues are way down.

These are indisputable facts. GOP cultists, however, occupy a metaphysical netherworld where anything in the New York Times is false by definition, scorning arithmetic as an elitist tool. Much of the public simply doesn't know what to think; the Obama White House has been perversely reluctant to tell them.

A budget default would give the White House unprecedented, arguably illegal power to pick and choose which laws it would obey. Then there's the 14th Amendment, stating that "the validity of the public debt of the United States, authorized by law ... shall not be questioned."

Hence the president would be on solid grounds, constitutional scholars argue, simply to raise the National Debt limit by executive order and dare Congress to do something about it. Sure, right-wing cultists would go even crazier, screaming about tyranny and threatening impeachment.