A note from Rick Warren 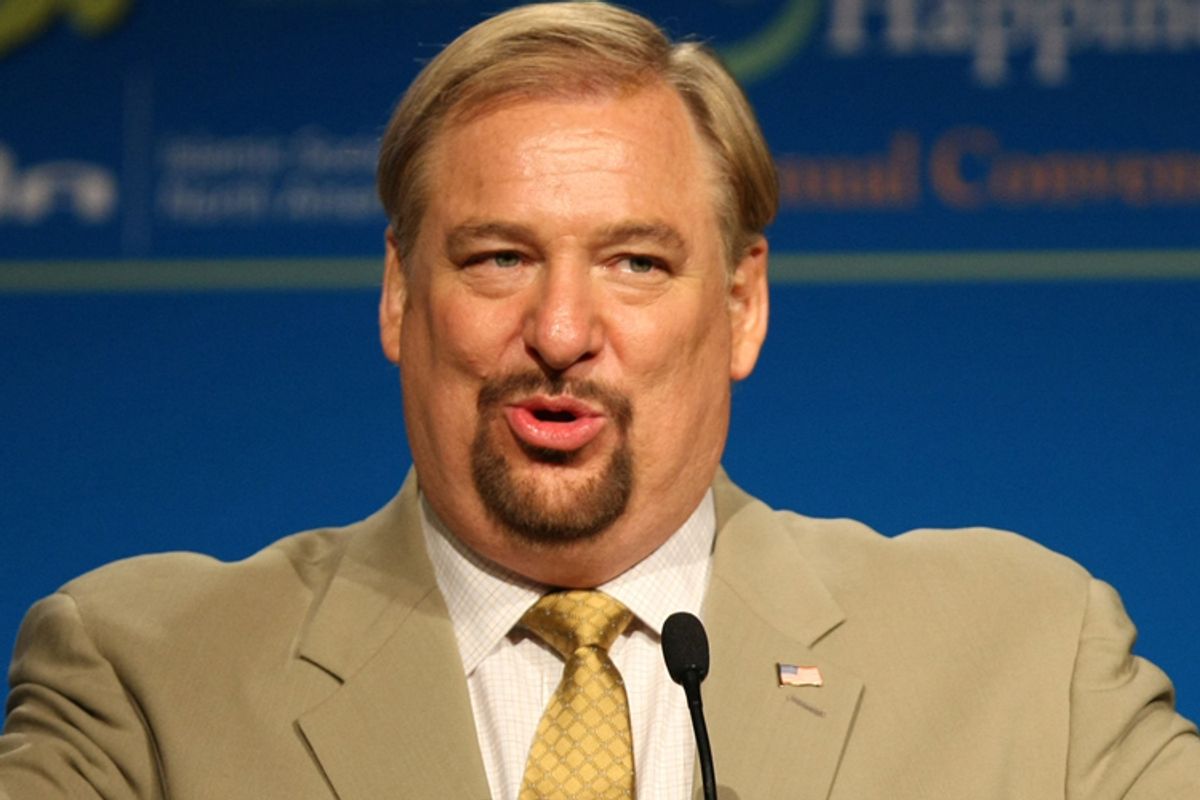 I wrote Tuesday about my Twitter exchange with Rev. Rick Warren, the pastor of Saddleback Community Church and author of the best-seller "The Purpose-Driven Life." I had tweaked Warren Monday night for his snarky Tweet about taxes, in the wake of President Obama's plea for a debt-ceiling crisis compromise. You can read it all here.

Wednesday morning Warren replied in our letters section, and I thought I'd give him the courtesy of putting his reply in a post. It's below. I'm publishing it verbatim, rather than cleaning it up, to capture it accurately. As someone who has certainly wished I could take back a Tweet or two myself, I appreciate Warren's honesty. We disagree about many things, maybe most things, but in this treacherous political climate I respect his work with the poor as well as his willingness to engage with someone on the other political side. You can decide whether you agree with his reasoning yourself, and most of you probably won't.

In the spirit of dialogue I would like to ask Warren to beseech Congressional Republicans, who are most often his allies, to rethink their dangerous extremism on the debt-ceiling question. Whether or not he agrees with the president on taxes, Warren must recognize that the same spirit that inspired Obama to defy his liberal and gay supporters by asking Warren to do his invocation has also inspired the president to make many, many concessions to Republicans in this last month of increasingly desperate negotiations. And in exchange for concessions that I believe should be unthinkable to liberals, including raising the age of Medicare eligibility, what has Obama gotten? He's gotten to hear John Boehner confiding to Laura Ingraham that some in his caucus believe "chaos" helps them politically, and so they're willing to bring it on. He's gotten House GOP Whip Kevin McCarthy showing his caucus a movie in which gangsters enlist their buddies in plans to "hurt some people," and the buddies happily agree. If Warren perceives himself as a peacemaker and not a partisan, maybe he'll spend some of his political and spiritual capital imploring conservatives to compromise with Obama, rather than destroy the economy in order to destroy his presidency.

Thank you Joan - from Rick Warren

I never respond to insults but Joan's article is accurate & fair (except for the headline), so here's my view. I try to give anyone who tweets or speaks publicly a 10% "grace factor" because we all inevitably makes dumb statements, given enough words. I use up my 10% allowance by noon daily. I removed the tweet as soon as I saw how dumb & mean it sounded. What I should have said was that I honestly don't believe our nation can tax its way out of bankruptcy. There simply aren’t enough taxpayers. The unemployed CANT pay taxes, and right now 11% of our church is out of work. Saddleback is not a rich white church- we are multicultural & speak 67 languages. My view is that a better solution to increasing revenue is to focus instead on incentivizing JOB CREATION which will spur both consumer spending AND tax revenue. Finally, it is arrogant nonsense to insist (as many hate-filled responses tweeted) that only those who support larger government love the poor. That’s absurd. I'm a small-govt Independent (neither Dem nor Rep), yet I've given my life to helping the poor & sick in 164 countries. I drive a 12 yr old Ford & wear a $15 watch from Wal-Mart so Kay & I can give 91% of our income to help others. If you need a reason to hate me, attack my pro-life position, or my belief that Jesus is the only Way to salvation. But to accuse me of siding with the rich & wealth, being a GOP shill, or not caring about the poor, the sick, & those needing education, is nonsense. My life, ministry, and philanthropy for 30 years is a public record of caring “for the least of these.” THAT is why both Bush & Obama had me pray at Inaugural events.