The end of John Boehner?

Now we know who really runs the House: The default-happy Tea Party 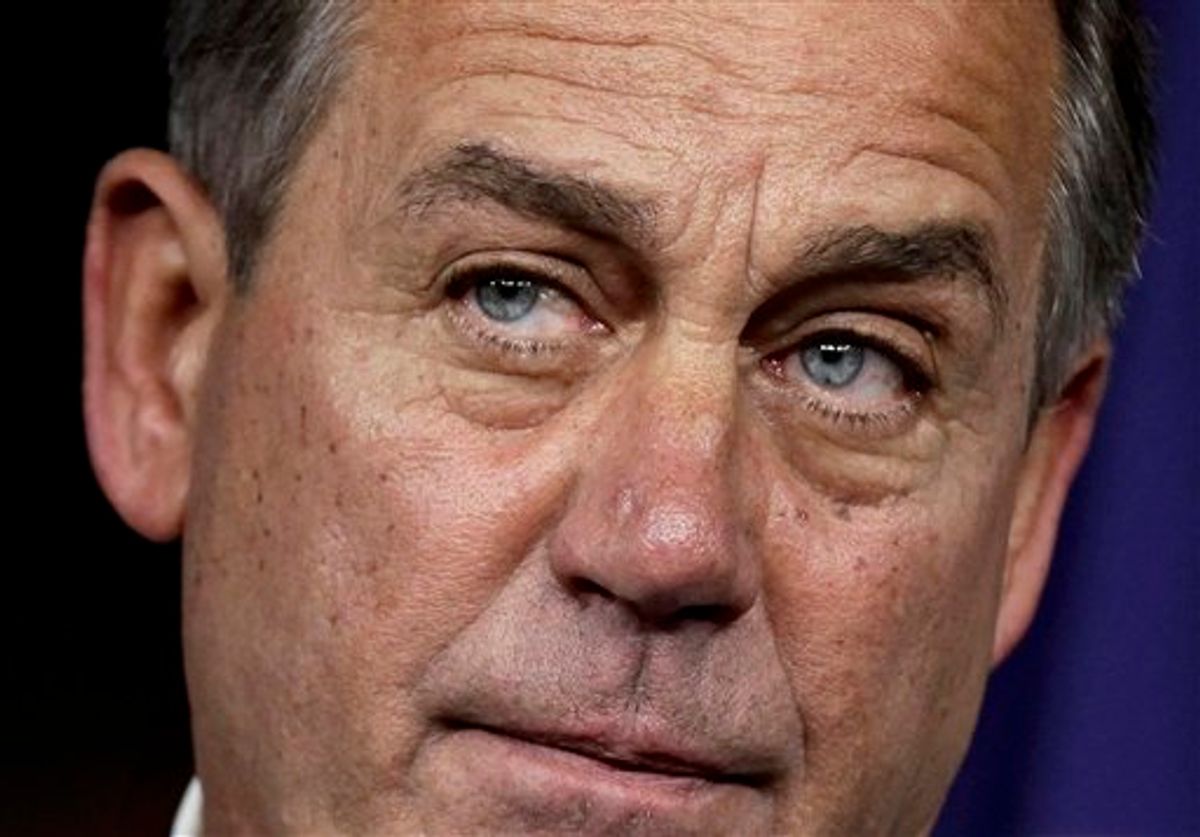 What we've suspected all along can now be asserted with confidence: John Boehner is a SINO -- Speaker-in-name-only. And after what went down -- or, more accurately, what didn't go down -- in the House on Thursday night, it's fair to wonder how much longer he'll even be that.

All week, Boehner did everything he could possibly think of to convince rank-and-file Republicans to line up behind his plan to raise the debt ceiling. That he'd been forced into this position was itself telling, the result of the House GOP's cool -- if not hostile -- reaction to the "grand bargain" framework he'd drawn up with President Obama, a long-term deficit reduction plan that was overwhelmingly slanted toward conservative priorities. But the rank-and-filers still smelled a sellout, so Boehner had to walk away, draw up his own 11th hour plan, and then persuade Republicans that by backing it they'd be sticking it to Obama.

And it looked like he'd pull it off. The Speaker made all of the required right-wing media rounds, privately briefing Rush Limbaugh and bragging to Laura Ingraham that Obama, Harry Reid and Nancy Pelosi were all against his plan. He also channeled his inner Tom DeLay, telling wavering House Republicans to "get your asses in line," and played a clip from a violent movie at a GOP conference meeting. Democrats made it clear they'd all vote no -- a posture that, in a perverse way, probably helped Boehner's effort to sell it to his own members. By sundown Wednesday, there was a growing sense that the plan would end up squeaking through the House by the slimmest margin.

But now Thursday has come and gone with no vote taking place. There was supposed to be one around 7:00 P.M., but when that hour arrived, the House was busy debating post office namings -- filler work while Boehner and his team scrambled to secure support that had eluded them all week. Shortly before 11:00 P.M., the No. 3 House Republican, California's Kevin McCarthy, announced the House would adjourn for the day without a vote, the August 2 debt default deadline creeping ever closer.

Why are House Republicans so unwilling to follow their own leader at such a critical moment? Probably because he really isn't their leader. He's simply the guy who was in place to ascend to the speakership when Republicans regained control of the House in last November's midterm elections.

The new GOP majority contains nearly 90 freshmen members, many of them ideological true believers who were powered to primary victories last year by a party base that seethes with resentment toward Obama. These new members (and a handful of longer-serving Republicans) share the base's antipathy toward Obama, and its conviction that national GOP leaders have contributed to the country's domestic woes by compromising with Democrats.

This is not Boehner's natural constituency. By this point in his career, he's essentially a Washington lifer, an 11-term veteran who is now in his second stint as a party leader. In the mid-1990s, he served as a Newt Gingrich lieutenant, only to toppled by J.C. Watts, who challenged him for his post after the 1998 elections. As one newspaper reported it at the time, "In the end, Boehner, who was considered a revolutionary in his first term, was not zealous enough for the conservatives elected in 1994." Eight years later, as a string of ethics scandals tarnished House Republicans, Boehner returned to the leadership, upsetting Roy Blunt to claim the party's No. 2 post. When Dennis Hastert stepped down after the GOP lost its majority in the November 2006 elections, Boehner was then elevated to minority leader -- the post he held when President Obama was sworn-in in January 2009 and Republican base's furious backlash began taking shape.

It was that backlash -- also known as the Tea Party -- that produced perhaps the most conservative national slate of GOP House candidates ever assembled last year. And it was that backlash -- coupled with swing voters' instinctive desire to use midterm elections to vote against the in-power party, especially during turbulent economic times -- that produced what can accurately be described as the most conservative Congress ever.

Boehner, a country club Republican who'd worked cooperatively with Democrats on occasions, was hardly the logical leader for this Congress. But then, no one else really was, either. Someone needed to be the Speaker, though, and since Boehner was in line for it and had spent the previous two years dutifully saying "no" to President Obama at every turn -- sometimes colorfully -- he was able to claim the gavel. Whether he'd be able to achieve anything with it was an open question.

And now we have our answer. Over and over again during this debt ceiling ordeal, Boehner has been undercut by the true believers in the GOP's ranks. Last week seemed embarrassing enough, when Boehner was forced to invent excuses for backing out of a "grand bargain" that, at virtually any other point in modern history, would have been considered a massive political victory for the GOP. But his humiliation on Thursday night -- unable to convince his own party to sign off on a plan that would prevent a default, trim about $1 trillion from the deficit, not raise a single new cent in revenue and allow the GOP to play this hostage game with Obama all over again in a few months -- seems far, far worse.

Boehner's basic lack of credibility with the Tea Party crowd was the culprit. He told Republicans his plan was Obama's worse nightmare, and he even got some surprising cover. But many of the voices that resonate most with today's Republican base -- and with the dozens of House members who are a part of that base -- simply wouldn't buy it. Despite Boehner's efforts to win him over, for instance, Limbaugh used his radio show on Thursday to suggest that an old fashioned wink/nod Washington game was being played: The Houses passes the Boehner bill, the Democratic Senate amends it with provisions acceptable to Obama, and then it returns to the House for final passage -- this time with Democrats voting yes and conservatives suddenly unable to stop it. It was a trap!

Limbaugh was not the only influential voice on the right pushing this kind of argument. His pitch was evidence of how sophisticated and cynical influential non-Beltway players have become in politics, particularly on the Republican side -- and how quickly and easily they can disseminate their messages to the masses. The voters who make or break House members in Republican primaries trust them and take their cues from them. Dozens of members of the House do as well. Boehner, simply put, is no match for them.

Supposedly, the plan now is to "tweak" Boehner's bill on Friday, then try again for passage. Maybe the second time will be the charm. Maybe not. Either way, House Republicans made it abundantly clear on Thursday night that while John Boehner may be the Speaker, he doesn't speak for them.

UPDATE: As of Friday afternoon, the House was readying a new version of Boehner's plan, one that includes a requirement that a Balanced Budget Amendment be passed by both chambers and sent to the states before any future debt ceiling extension (after this one) is approved. The vote is supposed to take place Friday night, and the plan seems likely to pass. To some commentators, this is a sign that a final compromise is near, and that Boehner's troubles have been radically overstated. As Rich Lowry put it at The Corner:

Boehner passes; the requirements for the second tranche are weakened and/or wiped out in the Senate; the final deal passes in the House with help from Democrats. We get some cuts and a commission and what is, essentially, a debt increase past the election

This may end up being about right, but it's also an open question how the right's most influential voices -- like this guy -- will react if and when a compromise plan is sent from the Senate to the House. That could be a very dangerous moment for Boehner, as Jonathan Chait explained: